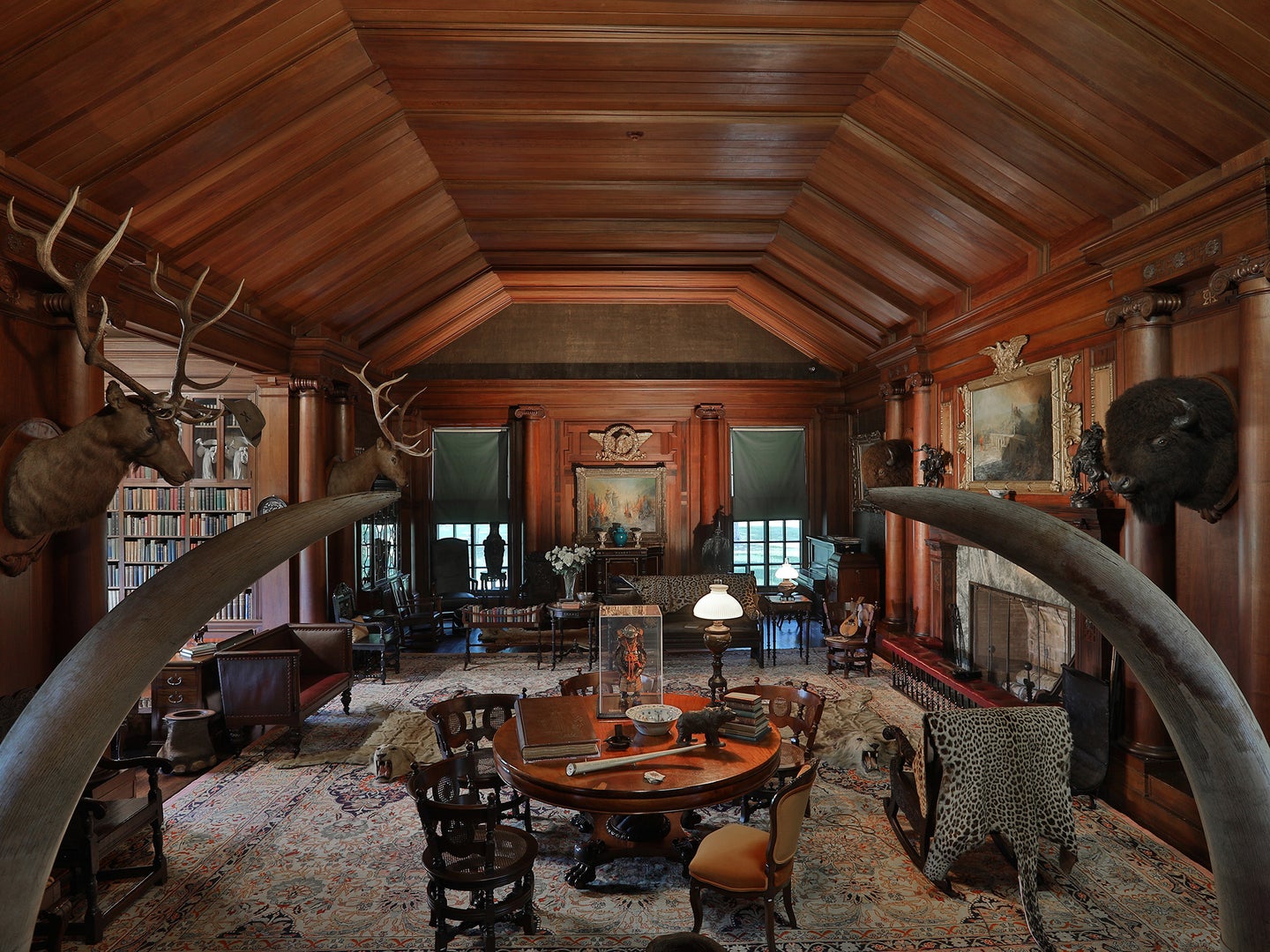 The North Room at Sagamore Hill. The elephant tusks were given to Roosevelt by the King of Abysinnia, and the room holds many presidential gifts and taxidermy from Roosevelt’s adventures. Mark Greenberg

Step Inside Sagamore Hill, the Home of Theodore Roosevelt

Our exclusive, up-close look at T.R.’s former home and the objects from his life as a hunter, naturalist, and explorer

THEODORE ROOSEVELT lived on a ranch in North Dakota, a townhouse in New York, and at one point, the White House. He camped in wall tents out West, slept on the banks of the Amazon, and shared campfires on the plains of Africa. But more than anyplace else, T.R. called Sagamore Hill in Cove Neck, New York, home.

The Roosevelts raised their children at Sagamore Hill. They entertained writers, politicians, cowboys, big-game hunters, and mountain men there. And it’s where the former president wrote many of his books on hunting and the outdoors.

Today, the house is like one huge box of treasures. Most of its souvenirs and keepsakes are things you’d expect an international diplomat, hunter, and explorer to have. There are taxidermied exotic animals and gifts from dignitaries around the world. But there’s also the small stuff—the little things any hunter walking in the woods would be inclined to pick up and save for no other reason than fascination.

The best part about Sagamore Hill is that it isn’t a walled-off place only open to a few. Like the public lands T.R. fought so hard for, it’s open to all as a National Historic Site. But with help from the National Park Service and T.R.’s great-grandson, Tweed Roosevelt, we were able to get access to the archives at Sagamore Hill for a look at some objects visitors may not usually see. Here’s our exclusive look.

The first thing you see when you walk in the door at Sagamore Hill. This set of antlers sits above the family’s riding crops.

Roosevelt’s son Ted Jr. dubbed this the gun room because it was used to store hunting equipment. The room served as a study for one of the children, and at one time as a storage room for Edith Roosevelt’s ball gowns. Later, Roosevelt worked with his staff in the gun room to write many of his books.

Teddy Roosevelt’s Winchester Model 1886, chambered in .45-90. The rifle has just about every special feature you could order from Winchester at the time—like a half-round, half-octagon barrel and a raised cheek piece. Though it looks to be in almost new condition, Roosevelt took this gun on many hunts. The rifle was sent back to Winchester five times to be re-fit and refinished because it was used so heavily.

A pair of insulated gloves that was clearly well used by either T.R. or a family member. They’re made from black bear hide.

Two large antler-handled knives that likely belonged to Roosevelt. The left knife bears the inscription T.R., and the right has a metal R at the base.

Roosevelt’s taxidermist, James L. Clark fashioned this set of chimes from elephant tusks T.R. took in Kenya in 1909. The chimes were used to call the family to dinner. Every dinner at Sagamore Hill was formal, and most of the food served came from the property.

Roosevelt was an avid reader and writer. He would often have a book with him as he walked around the property at Sagamore Hill. This copy of Forest and Stream is from T.R.’s library. The magazine was founded in 1873, and Roosevelt was a contributor. It merged with F&S in the 1930s.

A crate from Roosevelt’s 1909–1910 safari in Africa. Inside there is a list of contents, mostly food, including 3 pounds of apples, tins of sausages, baked beans, plum pudding, biscuits, rice, and several kinds of jam.

This medicine kit accompanied Roosevelt on his expedition to the Amazon in 1913–14, which was sponsored in part by the American Museum of Natural History. Roosevelt and Brazilian explorer Colonel Cândido Rondon surveyed the path of the River of Doubt in the Amazon River basin and collected many animal and insect specimens there. During the expedition, Roosevelt nearly died from infection, and he never fully recovered from the trip.

Roosevelt’s study is located next to the front door of the house. The room is small compared to the North Room, but it is filled with personal keepsakes and taxidermy. Here, T.R. would tend to his duties as president and wait for guests to arrive. He was the first president to govern away from the White House for extended periods of time.

The hat and saber Roosevelt used in his service with the Rough Riders during the Spanish-American War. He hung both items in the North Room on the antlers of an elk he took at Two Ocean Pass, Wyoming, in 1891.

This plaster cast of a bear’s paw is located in the Gun Room at Sagamore Hill. On its base, there’s an inscription: Killed by the president, Aprile 17, 1905.

Two inkwells made from the feet of a hippopotamus (left) and a rhinoceros. At the time, taxidermists offered to make many household items from animal parts. It’s likely that the feet used in these inkwells came from animals taken on Roosevelt’s African safari in 1909–1910.

One of T.R.’s suitcases, embossed with T. Roosevelt. After the president’s death, his wife, Edith, used the suitcase, and some of the luggage labels are from her travels.

The front entrance of Sagamore Hill, located in Cove Neck, New York. If you’d like to see more of T.R.’s treasures in person, the house is open to the public for tours by reservation from Thursday through Sunday. There is also a museum on-site, open from 11:00 am to 4:00 pm, and there are walking trails around the property.