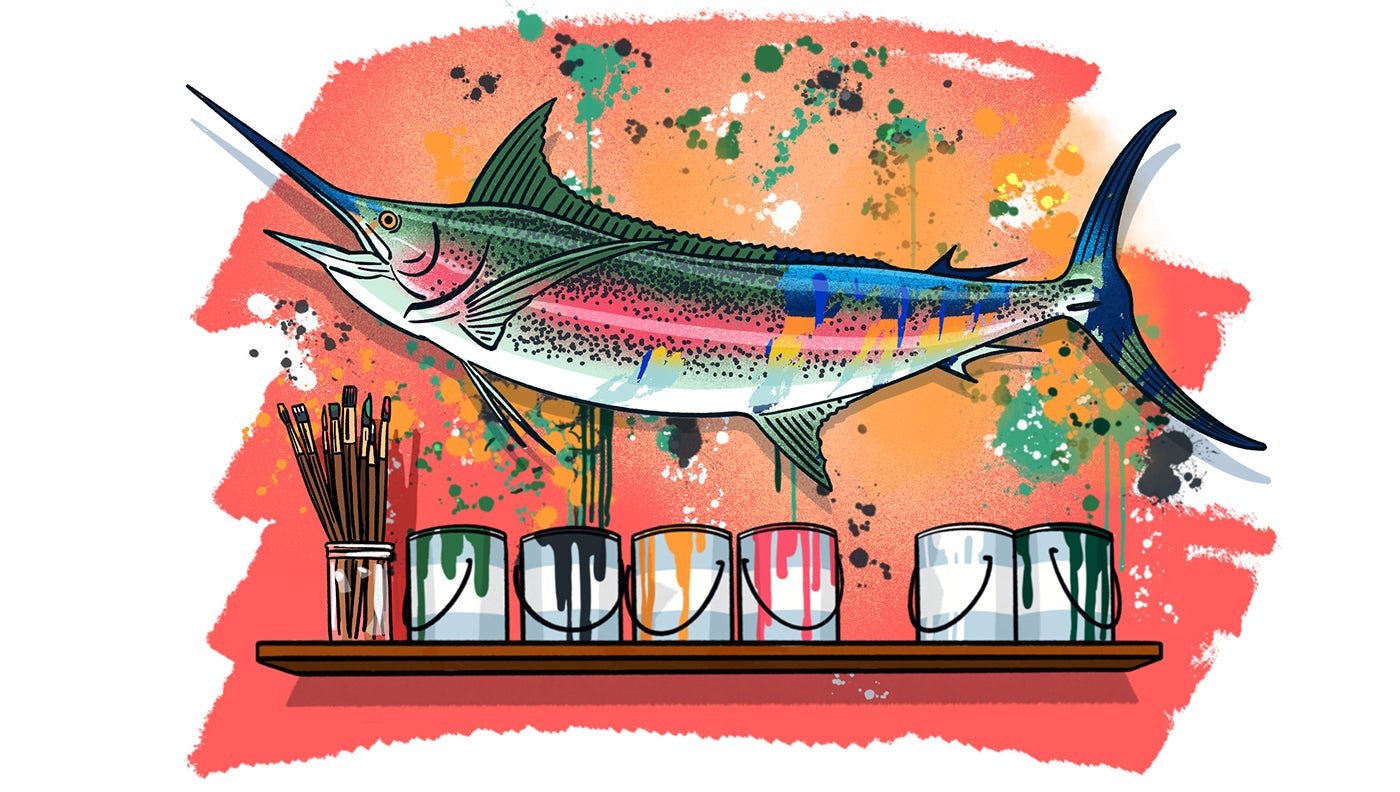 In this week’s edition of Ask the Experts, Joe Cermele answers your questions about fish, fishing, and why some fishermen are so full of it

Longtime F&S fishing writer Joe Cermele has stepped up this week to settle the eternal debate of fly vs. spin, to weigh in walleyes and zanders, and to explain why fishermen from New Jersey are such jerks—er, that is, so very, very forthright. Plus much more. Here are your questions and Cermele’s answers.

Q: What is the coolest fish mount you’ve ever seen? —Eric Carden, via email

A: Years ago on an assignment for Field & Stream, I walked into a tiny mom-and-pop car-rental establishment, and behind the counter, spanning the entire wall, was a blue marlin mount. This fish would have easily been a 600-plus pounder—and it was painted up like a rainbow trout. Nowadays, it’s trendy to paint replica mounts like the wrong species. Just the other day I saw a tiger shark on Instagram painted like a peacock bass. But I bumped into this marlin in 2006, well ahead of the trend, and I thought it was the coolest thing.

A: So, you want me to piss off half my audience, huh? I’ll tell you what: I’ve seen exceptional fly anglers struggle to cast a curly-tail grub on target, and I know plenty of seasoned conventional anglers that fall apart with a fly rod. I’ve preached for years that pitting fly gear against conventional gear is kind of stupid. Each has its time and place, and the best anglers I know are proficient with both.

Q: If wildlife officials came up with a plan to effectively remove invasive snakeheads from all U.S. waters, would you support it? —Len Haberland, via email

A: Yes, but that doesn’t mean I wouldn’t be sad about it. Snakeheads don’t belong here. They never should have been introduced to our waters. But they are here and right now they’re not going away, so why not enjoy a fish that has so many great sporting qualities? I wouldn’t launch a “Save the Snakeheads” campaign, but I’m not holding my breath for such a plan either. Snakeheads have been around for 20-plus years, and every year we’re not eradicating them, they’re spreading and making more snakeheads.

Q: Is there anything dumber than catch-and-release walleye fishing? Why would anyone cross the street to catch a walleye, except to eat it? —Joe Valenzano, via email

A: Yeah, I’m right there with you, bud. That said, I have the utmost respect for good walleye anglers, especially on big waters like the Great Lakes. It’s a skill set I’ll never possess. I also have a deep appreciation for walleye culture, because I just love regional fishing cultures in general. So while I dig the walleye scene, it is kind of a bummer that all those poor people in it are stuck worshipping a fish that fights like a wet sponge, right?

Q: Every fishermen I’ve ever met from New Jersey was an asshole. Is that a coincidence? Wait, you’re from NJ, aren’t you?  —Ryan G, via email

A: It’s not a coincidence, but you may be confusing asshole-ishness with brutal honesty. Round my way, we say what’s on our mind right now. We’re not gonna stew on what you said at the Mayberry church picnic and call three days later asking for an apology. If we think you’re an asshole, we’ll tell you immediately. Either deal with it or don’t, asshole.

A: This one deserves a punk-rock analogy. One of my favorite bands is Operation Ivy. They blew up in the late ’80s and early ’90s, and Tim Armstrong was their guitar player. The group disbanded decades decades ago but left a lasting impression on the punk scene and still has a huge following that cherishes the old records. Tim Armstrong went on the start Rancid, which still performs today and is one of the biggest, most respected, and successful punk bands in history. I’m certain old Tim is proud of what he did during the Operation Ivy years, and he’s glad people still enjoy that music so much, but he moved on and didn’t look back.

Q: Simple: Name your top-five favorite species to fish for, in order. —D.D., via email

A: 1. Striped bass: I grew up in the ’90s, when there were so few stripers that catching one seemed like a mythical achievement. I was lucky enough to see that population rebound, but I still get the same thrill catching one.

2. Wild brown trout: I love all trout, including the stocked variety. I grew up chasing stockers and still do so today with my kids. But there’s something about a big, wild brown that trumps all the rest.

3. Snakeheads: I’m not ashamed of it. I am legitimately addicted to hunting snakeheads.

4. Smallmouth bass: I love all smawjaws, but river bronze is my true passion.

5. Tuna: I don’t care if it’s bluefins, yellowfins, blackfins, or bigeyes, nothing compares to a tuna fight, and there’s no other fish I’d rather fill a cooler with.

Q: What’s your opinion on European Zanders in North Dakota? Should they be stocked again? —Austin D, via Instagram

A: I had no idea zanders were ever stocked in North Dakota. I’ve also never caught a zander, so I can’t speak to how they fight or taste. You know now that trophy walleyes don’t exactly get me revved up, so the odds of my traveling to the zander homeland to find out is pretty slim. I would worry that zanders could take a toll on existing walleye and perch populations, so that would need to be considered. In the end, if they’ll smoke a drag or smash a topwater, I can see some value, but if the appeal is just that it’s a different walleye, I’m not sure we need them.

Q: What’s your best tip on fishing for muskies in a river? —Jeremy J, via Instagram

A: Go to that river and target muskies as often as you can. Not just once a season or only when the conditions are perfect. This, I’ve decided, is the secret to all muskie fishing regardless of the water type. One thing I love about muskie rivers, though, is that they read like trout rivers. Anyplace you think would appeal to a big trout—like a deep hole, eddy, current break, seam, logjam, and so on—is a good place to cast for muskies. Put me in the middle of a huge lake with miles of featureless weeds and I feel like I’m pissing in the wind.

Q: Why would a fly fisherman ever chose to become a Euro nympher instead of throwing dries or chucking streamers?  —Will Daws, via email

A: Because they want to call themselves fly fishermen without having to actually fly fish. They also can’t stomach the idea of a skunking, even if they’re catching only tiny trout. There’s no denying the effectiveness of Euro nymphing, but let’s not forget that it was popularized because of competition fly fishing (three words I don’t think belong together). Take away the drag of a traditional fly line (Euro lines are basically straight mono), use heavy nymphs that get to the bottom superfast, and you’re going to catch more fish. But is that fly fishing? Funny thing is, I love using Trout Magnets on a long, light spinning rod, and fly guys give me such hell. I don’t get it, because I’m Euro nymphing. I’m just not using a fly rod.