The Hottest New Trail Cameras for 2023

The latest crop of cams is one of the best in years, including one unit that claims eliminate false triggers. Here are the new year's top models 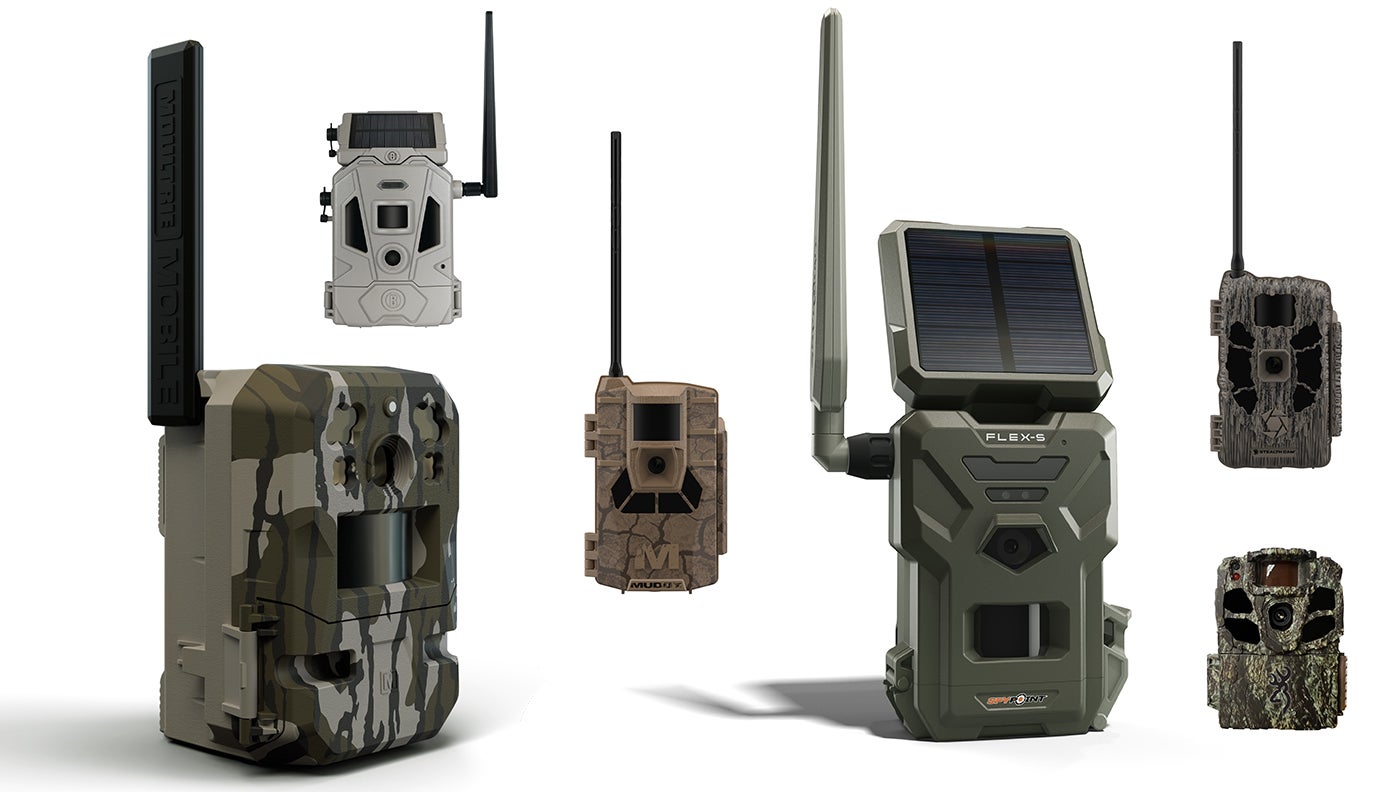 Follow our full coverage of the latest and most talked-about new hunting equipment for 2023, including rifles, shotguns, knives,  compound bows, crossbows, broadheads, and more.

Some folks get excited about the holidays or their birthday. Me? I get all worked up about the launch of the year’s new trail cameras. You’ve heard about guys who get as pumped to hang the summer’s first cams as they do for the deer opener itself? Yeah, that’s me.

This year is especially exciting, too, because the latest batch of new cams is among the best I’ve ever seen. Recent trends in cameras, particularly wireless models, have leaned toward higher performance and more features with little to no increase in cost. With inflation causing price bumps in virtually everything we buy, trail-cam costs are basically flat, while what we can expect from them continues to climb. Here are the hottest new trail cameras for 2023

One of the emerging trends in wireless cams is ability for a unit to select and utilize the network with the strongest signal, and the new Deceptor does just that. Dual-SIM cards come pre-installed with Verizon and AT&T on board, and the camera senses the carrier with the best communication and automatically switches to it; a cool feature if you’re taking the camera on an out-of-state trip or plan to use it on a distant farm.

Stealth Cam’s Command Pro app is one of the better ones on the market, and this year it features an On Demand function, which allows you to make a real-time check of wind and weather conditions, as well as recent game activity in the area. The Deceptor has a detection/illumination range of 80 feet, 0.4 second trigger speed, and NoGlo infrared LED illumination.

I used a Spypoint Flex camera all last fall and it was among my favorite units; it was easy set up, took good pics, and, as best as I could tell, it was one of the few cams I had out that didn’t occasionally spook deer. My only beef was battery life, which was moderate at best. Which brings us to why I’m really excited about the Flex-S, which features an internal lithium battery coupled with a solar charger. Eight AA batteries can be installed as backups. When the internal battery fades to a certain level, the AA’s takeover while the solar panel recharges the internal power source. This should result in a huge boost in battery life/performance and, of course, reduce the need to visit the camera.

Like its predecessor, the Flex-S features a dual-SIM card (preinstalled) that selects the best carrier in the area. Trigger speed is an impressive 0.3 seconds, the 100-foot detection/flash range is very good, and if the Flex-S produces the same sharp pics and video as last year’s model, well, sign me up.

Another cellular cam with dual SIM cards, the Matrix will automatically search for and select the carrier with the strongest signal in the area. If you’re familiar with Stealth Cam’s Command Pro app (which is both smartly designed and user-friendly) you’ll enjoy setting up and running the Matrix, as it employs the same platform. As mentioned above, this app has an On Demand function that takes an immediate “snapshot” of the area, including weather and wind info that can aid in hunting decisions for the day.

The Matrix’s features should make it a solid performer. The 80-foot detection range is as good as most, and I really liked the adjustable settings of this camera, which allow you to choose between three megapixel ratings (36MP, 8MP and 4MP) and select timeout settings ranging from five seconds to three minutes. These are great features when moving between mineral licks/feeding sites (where you’ll want a longer timeout) and spots like mock scrapes/funnels, where you want that cam recovering quickly.

Moultrie’s Edge camera was one of last fall’s most popular models, thanks to its solid performance and low ($99) price. The Edge Pro builds on that success, with a host of new features that sound pretty exciting. For starters, the Pro features a fascinating technology called False Trigger Elimination (FTE), which is designed to eliminate triggers by environmental factors (grass, weeds, errant tree limbs, etc) as well as non-target species (possums, feral cats, etc). If this works—and I can’t wait to test it—it will truly be a game-changer.

The Pro also sports built-in memory storage, eliminating the need for SD cards. Its Auto Connect Technology selects the strongest carrier in the area and utilizes that network using its dual SIM card. The Edge Pro has an advertised 100-foot detection and flash range, which is a good as about any camera out there. While its 0.5 second trigger speed is no lightning bolt, the Pro claims a 12-month battery life, which is something special indeed, especially with battery prices up more than 30 percent in recent months. This is a feature-packed camera worth a hard look from serious cam-users.

If you’ve got a camera-shy, ghost buck, this may be the camera that can amass a photo file on him. For starters, the Dark Ops Full Extreme is one tiny unit; measuring only 4¼ X 3 inches, it will fit in tight spots be less likely to attract a wary buck’s eye. To up the covert ante, Browning has improved on its invisible flash system (four high-power infrared LED’s that illuminate the subject yet emit little visible light) by increasing the field of view and adding the ability to shoot high-res night photos.

Browning packs a bunch of top-notch features into this mighty mite. The adjustable trigger speed ranges from a rocket-fast 0.135 to 0.7 (the latter of which is perfectly fine for mineral licks and feed stations), and the flash range is a very good 90 feet. Illuma-Smart technology automatically adjusts the IR flash for the best nighttime pics, and the IR flash is adjustable between long range, fast motion, and economy modes. While the unit runs on a half-dozen AA batteries, don’t plan on buying a bunch; in my experience few cameras compete with Browning when it comes to battery life.

Building on the popularity and performance of last year’s CelluCore cam, the CelluCore 20 Solar gets a boost in battery life from a solar panel. The panel is loaded with rechargeable lithium batteries powered by the sun. When that charge fades, the camera switches to conventional batteries until the solar pack recharges, so there’s no gap in photo/video coverage. In a very smart touch, the solar panel is detachable and can be mounted where it will receive the most direct sunlight (typically facing south, which a poor choice for pointing the camera lens). Also new, the CelluCore 20 Solar features an improved antenna for better reception and dual SIM cards that allow the camera to select the strongest carrier in the area.

The CelluCore 20 Solar boasts a solid 80-foot detection range, and while the advertised trigger speed of “sub 1-second” is nothing to write home about, there’s lots to love with this unit. Data plans are very reasonable (first month is free and plans as low as $10/month are available), night images are said to be very good, and with the significant savings on batteries, this cam will basically pay for itself.