The Best Cartridges For Hunting in Africa

No matter what kind of safari you're going on, our shooting editor has you covered 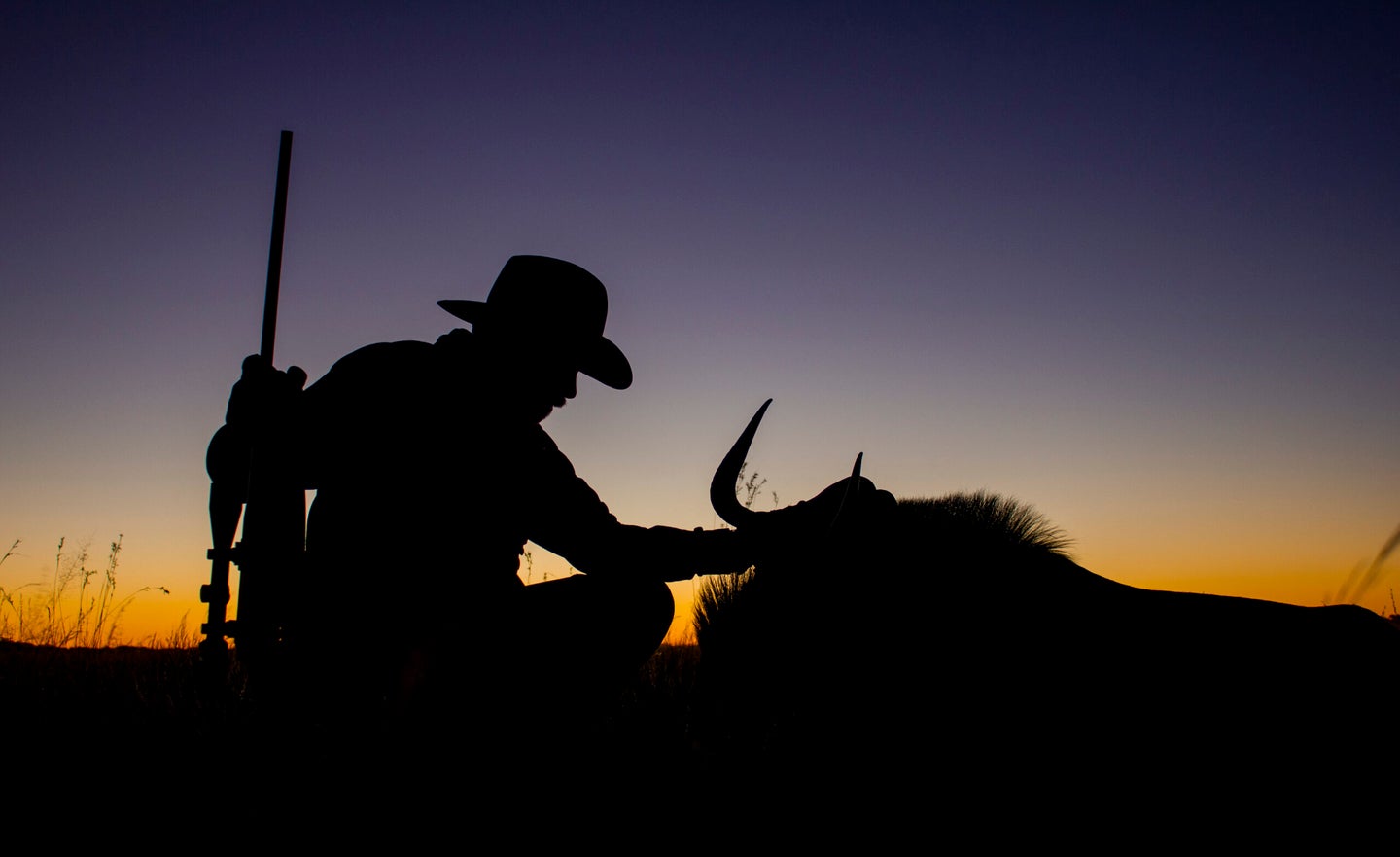 Your deer or elk rifle is better suited for hunting in Africa than you may think. Richard Mann
SHARE

Legend has it that the critters in Africa are harder to kill than those in North America. If you’re talking about buffalo, hippo, and elephant, that’s partly true because there’s simply nothing in North America that compares. But when it comes to African plains game—antelope—they’re no harder to kill than mule deer or elk. Sadly, this myth leads to many first-time safari hunters being over-gunned, which results in poor shooting, which in turn, perpetuates the myth.

There are typically three types of African safaris. There is the standard plains game hunt where the hunter is looking for a variety of antelope, warthog, and maybe zebra, giraffe, or ostrich. Then there is the dangerous game hunt, which includes the likes of elephant, buffalo, hippo, lion, or leopard. And then there is the combination safari that includes plains game and dangerous game. In the first two instances, a single rifle will serve a hunter well. But in most cases, a combination safari calls for two rifles. Here are nine cartridges that will sort out an African safari of any type.

The antelope of Africa range in size from the diminutive dik-dik at about 10 pounds to the eland, which can weigh almost 200 times as much. Then there are other critters like warthogs, bush pigs, hyena, and giraffe, and even ostrich. Typically, especially if you’re with a good professional hunter, most shots will be inside 300 yards. What’s needed in most cases is a rifle chambered for a cartridge capable of handling them all, with some specialization in some specific circumstances.

The common American deer or elk rifle is ideal for African plains game. A big impala ram will weigh in at around 150 pounds, kudu bulls as much as 500 pounds, and an eland can weigh as much as 1700 to 1800 pounds. I’ve seen the .308 Winchester work to perfection on most of Africa’s plains game, including eland. Inside 300 yards, it’s an ideal choice because it offers a great balance of power, trajectory, and recoil. In fact, I’ve taken most of Africa’s plains game with a .308 Winchester and a single load: Nosler’s 165-grain AccuBond.

Of course, similar cartridges like the .30/06 Springfield, .270 Winchester, and the much older and more traditional 6.5×55 or 7X57 will work just as well. But the .308 offers lots of options when it comes to rifles and ammunition. Cannons are simply not required in Africa. My wife used a .243 Winchester and 85-grain Nosler Partitions to take gemsbok (450 pounds) and blue wildebeest (600 pounds) with one shot each. Of course, she knew the secret—hit ‘em in the right spot.

At 500 yards the Winchester’s 300 Magnum will do anything the .308 Winchester will do at 300 yards. But in Africa, where if you draw blood but don’t recover the game you still pay, you got no business shooting any farther than that. (Wound a Nyala and it will cost you more than three grand.) The price for that extra 200 yards of performance is recoil, and if your professional hunter is worth his salt—and if you do what you’re told—you’ll not need that extra reach. However, if you feel you need the added oomph, the .300 Win. Mag. will deliver.

It’s what I used on my first of a dozen safaris but realized I didn’t need that much gun. However, some hunters like the idea of heavier bullets, particularly on the larger species. If the extra punch on your shoulder does not bother you, the .300 Winchester Magnum will handle all of the non-dangerous game Africa has to offer. The same could be said of Weatherby’s 300, the 7mm Remington Magnum, or the .35 Whelen I carried on my fifth safari.

Though it might seem an odd choice for Africa, there are quite a few ultra-small species of plains game that weigh less than 100 pounds. These itty bitty antelope, like the klipspringer, steenbok, and duiker, are often sought by veteran safari hunters who have already taken the larger species such as kudu and the like.

Obviously, they can be taken with any cartridge, but it’s popular to preserve these trophies with full-body mounts, and the more powerful, larger caliber cartridges, can make this problematic. With premium bullets or Winchester’s great 64-grain Power Point, the .223 Remington is ideal for these critters and can even work well for some of the larger antelope like the springbok and bushbuck. In fact, some outfitters have a .223 or .222 Remington on hand as a loaner rifle for clients who want to peruse these diminutive antelope, which are great fun for hunters who might tag out early on a dangerous game hunt.

Africa’s dangerous game animals can leave a permanent mark—the great professional hunter Hennie Badenhorst has scars on his bald scalp from a leopard. Or they can simply leave you in a blood puddle—professional hunter Claude Kleynhans was gored in the femoral artery during a surprise charge by a buffalo while loading another buffalo he had killed. When it comes time to take on beasts like buffalo, elephant, and hippo, shooting them is simply not enough. You need to slam them—in the right spot—with nearly two tons of kinetic energy.

I made a bad first shot on my first African buffalo. My PH ended up shooting it with his .470 Nitro. The bullet hit the bull’s horn and ricocheted into parts unknown. I ended the dilemma with a quick headshot from my .45-70. But the .470 Nitro is solid choice for Africa’s most dangerous game—of course shot placement still matters. The cartridge is popular in Heym or Merkel double rifles. Out of either one it will generate about 70 foot-pounds of recoil.

Of course, the true allure of the double rifle and the .470 Nitro is the instant follow-up shot and the nostalgia that comes along with both. However, skill at running a double gun, or the tolerance of the mind-numbing recoil, does not come without lots of familiarity and practice. For all but the most dedicated and wealthy traveling sportsmen, the big .470 NE and double rifles are probably best left to the professionals. That is, as long as they can shoot better than the PH I had.

The .458 Winchester Magnum will push a 400-grain bullet to 2250 fps or a 500-grain bullet to 2050 fps. The resulting kinetic energies are 4496 and 4655 foot-pounds—respectively—at the muzzle. Introduced in 1956, the .458 Winchester Magnum initially developed a bad reputation with dangerous game hunters. The problem was ammunition that allowed bullets to creep out of the case and wide velocity variances, all due to massively compressed powder charges. Though some still do not trust it, Winchester and other ammunition manufacturers have long since corrected those issues, and for most, the .458 has become a trusted choice for Africa’s nastiest critters. Its 70-plus foot-pounds recoil is stout, even out of Winchester’s nine-pound Model 70 Safari Express. But that’s the price you must pay if you want to play with big guns and nasty beasts.

Dangerous game is called “dangerous” for a reason; if you do stupid stuff these creatures can kill you. And while nothing makes up for poor shot placement, some hunters feel better when they have all the power they can muster on their side. Remington introduced their 416 Magnum in 1988; it was simply an 8mm Remington Magnum necked up to accept a 0.416-caliber bullet, and it emulated the performance of the ancient .416 Rigby, generating 5000 foot-pounds of kinetic energy at the muzzle.

Of course, you’re going to know it when you pull the trigger. Out of a nine-pound Winchester Model 70, you’re approaching 80 foot-pounds of recoil. How hard is that? Repetitive exposure to recoil levels like that can cause a concussion and even long-term problems. On the plus side, a .416 Remington will kill the hell out of anything that needs killing. The .416 Ruger nearly duplicates the .416 Remington’s performance and at $1569 it’s reasonably priced in Ruger’s Hawkeye African rifle.

Read Next: The Hardest Kicking Rounds of All Time

Most of the hunters who opt for a combination safari that includes plains and dangerous game also opt for two rifles. This generally works out well, but as it always seems to be when you’re hunting, you often have the wrong gun when you see the right animal. Fortunately, there are several cartridges that can do a good job on both plains game and dangerous game. Two of these three such cartridges come in bolt and double guns, and one comes in a lever action.

Because the .45-70 Government is as old as the Colt Peacemaker it is grossly overlooked and even misunderstood. Modern .45-70 rifles like the Marlin 1895 can push a 380-grain mono-metal solid to almost 2100 fps. For the mathematically challenged, that’s approaching two tons of kinetic energy, and along with that comes about 60 foot-pounds of recoil. But unlike most dangerous-game-capable cartridges, you can also buy lesser recoiling, mid-level, factory .45-70 loads that will push a 300-grain bullet to around 1850 fps. The resulting recoil is halved, and these loads are suitable for all of Africa’s plans game. If you have so much cowboy in you that you cannot let go of the lever gun, you can hunt anything in Africa with a .45-70. The downside is reach. The .45-70 is at its best inside 150 yards. But, if you can hunt and have a good PH, that’s not a problem.

This cartridge was introduced in 1905. It was designed to work in the Mauser 98 bolt action rifle, and it became very popular in Africa. The 9.3×62 fires a 0.366-caliber bullet and while it falls short of the common 4000 foot-pounds of energy generated by most dangerous game cartridges, it has been used with great success on all species of African game. Unfortunately, in some countries, the 9.3 is not permitted for buffalo or Africa’s other killers.

African hunter John “Pondoro” Taylor spoke highly of it. Though not all that popular in the States, it does have a cult-like following and for Americans who are unfamiliar with it, it is similar in performance to the best loads for the .35 Whelen. Though not considered a stopping rifle by any measure, it is a fine cartridge—where legal—for the traveling hunter who is backed up by a professional. With less than 40 foot-pounds of recoil in most rifles, it’s easy to shoot and will work fantastically well on plains game.

Legendary professional hunter Finn Aagaard (1932-2000) wrote, “The 375 H&H is a classic African cartridge, the most useful all-around big game cartridge for that continent that has ever been produced.” With energy levels right at the 40000-foot-pound mark, Aagaard considered it suitable—when loaded with proper solids—for elephant, and “certainly enough gun for the visiting hunter who will be backed up by a competent professional.”

Read Next: The Showstoppers: A Visual Tour of Some of the Most Stunning British Dangerous-Game Guns Ever Made

It’s also a favorite of Geoffrey Wayland, the most experienced professional hunter I know. Its true virtue is the balance of power and recoil it offers; a 300-grain bullet out of a nine-pound rifle generates less than 50 foot-pounds of recoil energy. If you just cannot stand the thoughts of a 100-year-old cartridge, the .375 Ruger is just as effective; it’s what my son used on his first buffalo. Like the 45-70, and the 9.3×62, the .375 H&H or the Ruger is an excellent one-gun answer for Africa, handling dangerous game up close, and plains game at double the distance.