These six rounds may be on the road to extinction, but they're all fantastic hunting cartridges 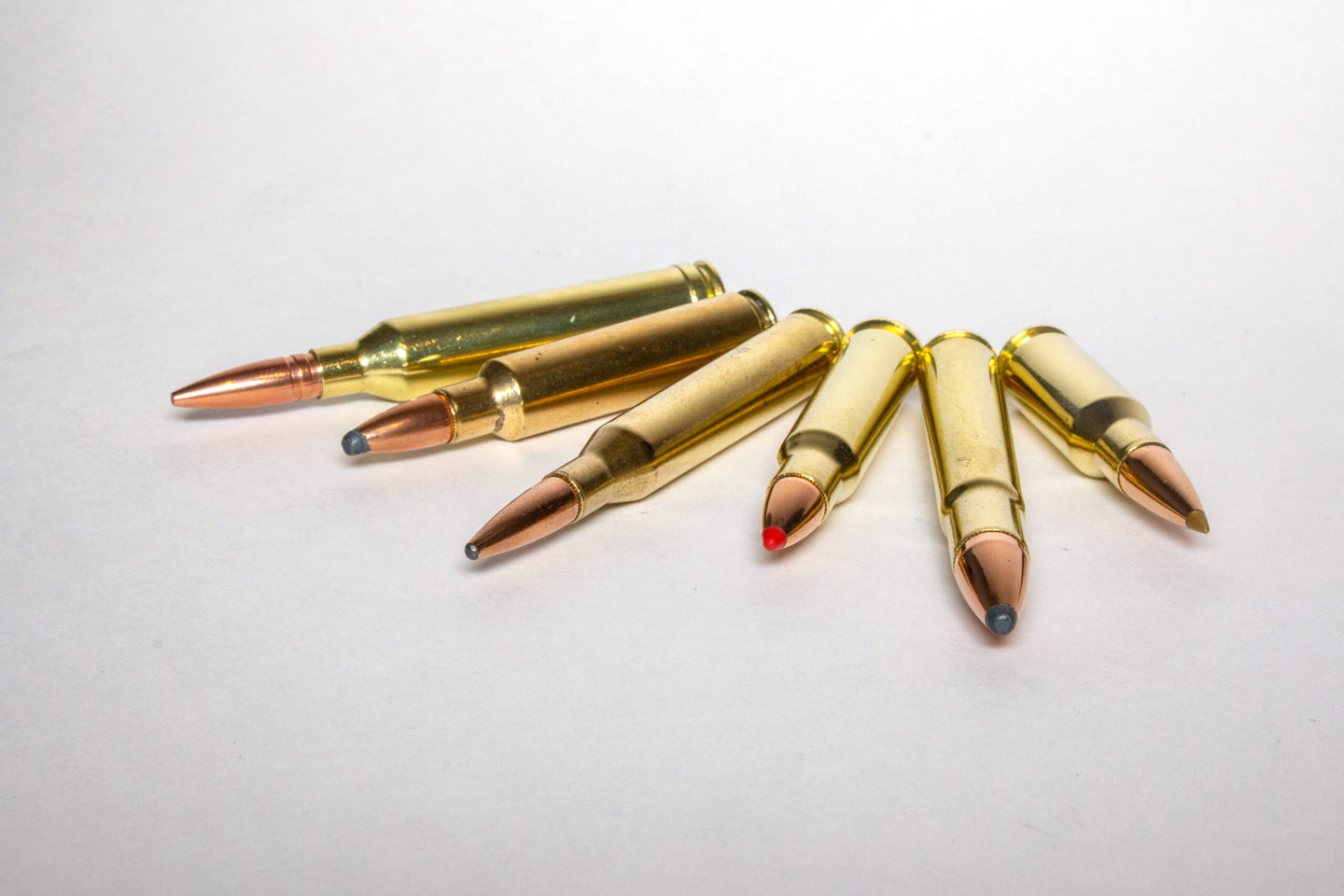 These six rifle cartridges are on the road to extinction. They are fantastic hunting cartridges, and they all deserve a second chance. Richard Mann
SHARE

With the hopes of luring hunters to something fresh, innovative, and different, we see new rifle cartridges introduced almost every year. The grass is always greener, right? New cartridges are exciting, but some old cartridges are exciting too. In fact, some old cartridges are more exciting than some of the new ones. Some cartridges hunters think of as relics need a second chance to prove their worth to a new generation of shooters, shooters who are looking for that little bit of ballistic edge to help them put meat in the freezer and antlers on the wall. Here are six cartridges that need that second chance, some are almost ancient, and some may not even be as old as you.

The 6.5×55 has been with us since 1891. The .264 Winchester Magnum showed up 62 years ago, and the .260 Remington is a quarter-century old. But, in the last decade, the 6.5 Creedmoor has been propelled to legendary status, becoming the first 6.5mm cartridge with mass appeal in America. That’s odd since from a muzzle velocity standpoint the Creed can’t run with any of its older brethren. When Winchester introduced the .264 Winchester Magnum, advertisements announced, “It makes a helluva noise and packs a helluva wallop.” And by golly it did; a 140-grain bullet at almost 3100 fps is serious business. But the .264 struggled against Remington’s 7mm Magnum, and it developed a reputation for burning out barrels.

Regardless, the .264 Winchester Magnum remains one of the flattest shooting big-game-capable cartridges of all time. Yeah, it might toast a barrel in 1500 rounds, but they make new barrels every day, and few hunters will shoot 1500 rounds over the life of their rifle. On my first safari, I shot a wildebeest at about 250 yards with a .264. Before pulling the trigger, my hunting partner asked if I had enough gun. When the wildebeest smacked the African dirt and the dust cloud settled, all my friend said was, “Damn!” Winchester needs to bring this cartridge back with a faster twist rate and call it the 6.5 Winchester Magnum.

In 1969 Remington legitimized a wildcat cartridge which used a .30/06 case necked down to fire .25-caliber bullets and they called it the .25-06 Remington. It quickly became one of the most successful cartridges, suitable for predators, varmints, and big game. It can drive a 75-grain bullet in excess of 3700 fps for the little critters, but also launch an elk-capable 120-grain bullet at 3000 fps. You’d have thought with ballistics like that the .25-06 would still be popular for hunting. It was for a while, but it’s now being forgotten

The problem with the .25-06 is that it offers a compromise most new-millennium hunters don’t want. They want rifles specialized for each specific pursuit. The .270 Winchester and 7mm Magnum are better for big game, and the lighter-recoiling .22-250 Remington is a better varmint cartridge. The true appeal of the .25-06 is its flat trajectory, which makes it capable to do just about anything that needs doing. Hunters who can only afford, or who only want, one rifle, is a niche that still needs filling, and few cartridges fill it better than the slim and sexy .25-06.

With its rebated rim and fat body, the .284 Winchester could be considered the original short-magnum cartridge. What’s wrong with a short-action cartridge that can push a 7mm bullet faster than 3000 fps? Nothing! Then why isn’t it more popular? The first reason was that it was introduced for Winchester’s Model 88 lever-action and Model 100 semi-auto rifles. The second reason was that the Remington’s 7mm Magnum had a year’s head start on it. And finally, about the time folks started to recognize what the .284 was capable of, Remington introduced the short-action 7mm-08. If you’re not a Baby Boomer or Gen Xer, you’ve likely never heard of the .284.

That does not mean the cartridge is antiquated or has no value in today’s world. In fact, if you like the idea of a short-action rifle that can perform on par with long-action cartridges like the .270 Winchester or .280 Remington, the .284 is just the ticket. It outpaces the 7mm-08 by about 200 fps, and it offers that flat, cross-canyon trajectory today’s hunters get so twitterpated over. If Winchester would have introduced the .284 in a short-action version of their famous Model 70 bolt-action rifle, the cartridge would not be slipping into obsolescence, and the world would be a better place. It still can be if you’ll just give the .284 a try.

You would think in this age of long-range wonder that the traditional lever-action rifle would be slipping into extinction. That’s not the case; the lever-action rifle continues to tug on the heartstrings of American shooters. In 1983, Winchester introduced the 307 Winchester cartridge in their 1894 Big Bore with side ejection that made it riflescope compatible. Suddenly, the traditional lever-action was no longer just a 150-yard deer gun that hunters felt was unsuited for larger game like elk and moose. But the 307 didn’t catch on. Hunters wanting better lever-gun ballistics went with the more modern Browning BLR and the older .308 Winchester.

With modern powders like Alliant’s AR Comp, the 307 Winchester can be loaded to push a 150-grain bullet to 2700 fps from a 20-inch barrel of a tube-fed lever gun. In case you don’t know your ballistics history, that’s the equivalent of the original .30/06 loading. Fortunately, Winchester made a lot of 94’s in 307, and for about a grand you can pick up a used specimen in good condition. Hornady also offers 307 Win. LEVERevolution ammo. But now it’s time for a new 94 in 307 Winchester, and to complement it, Federal should add a 2700 fps 150-grain load to their excellent HammerDown line of lever-gun ammo. Otherwise, this cartridge is headed for the scrap pile.

The .30 Remington AR was introduced by Remington in 2008, just in time for the Obama-inspired AR buying frenzy. It couldn’t have come at a worse time. Everybody wanted an AR15, but not for hunting, which is the 30 Remington AR’s forte. The same stupidness that would eventually lead Remington to bankruptcy pushed the cartridge into obscurity. Some early advertisements for the 30 Remington AR listed the cartridge’s 300-yard velocity as its muzzle velocity. Even more foolishly, Remington never offered a blister-packaged complete upper receiver and magazine to allow shooters an easy conversion from an AR-15 in .223 Remington.

Designed specifically for the AR-15 platform, the .30 Remington AR will push a 150-grain bullet to almost 2600 fps and a 125-grain bullet to about 2800 fps. Nothing else in the AR-15 platform comes close, and with that rifle twice as popular now as it was a decade ago, it’s time for this cartridge to return and make the AR-15 all that it can be for the hunter. Some folks get it through. Every year Melvin Forbes at New Ultra Light Arms sells several .30 Remington AR rifles in his less than five-pound bolt-action Model 20-Short rifles. I have mine and the deer in West Virginia hate me for it.

Read Next: The 10 Most Overrated Cartridges Ever Made

6. .35 Whelen: For Breaking Bones and Hearts

When my best friend moved to Kodiak, Alaska to run the Baptist Mission on the island, he knew he would need a bear-capable rifle. I sold him my .35 Whelen and we were both glad I did. Before a year had passed, he used that rifle to stop a charging grizzly. Initially wildcatted in 1922 to push a 200-grain bullet to 2900 fps, the .35 Whelen has more muzzle energy than a .30/06 or a .300 Winchester Magnum. And it was popular enough for Remington to legitimize the cartridge in 1988. But even though sales never were brag-worthy, those who loved it, loved it like their mamma.

Now, only three decades later, you’d be hard-pressed to find a new—non-custom—rifle chambered for the .35 Whelen. The .35 Whelen is to North America, what the .375 H&H is to Africa; it is one cartridge that will work exceptionally for everything on the continent. There are still lots of good factory loads for the Whelen. The cartridge just needs a good rifle to give it one more chance before it becomes a memory. As for my friend in Alaska, it may be the one cartridge he’ll never forget.