Both are celebrated by hunters worldwide, but which one of these classic .30-caliber cartridges will come out on top 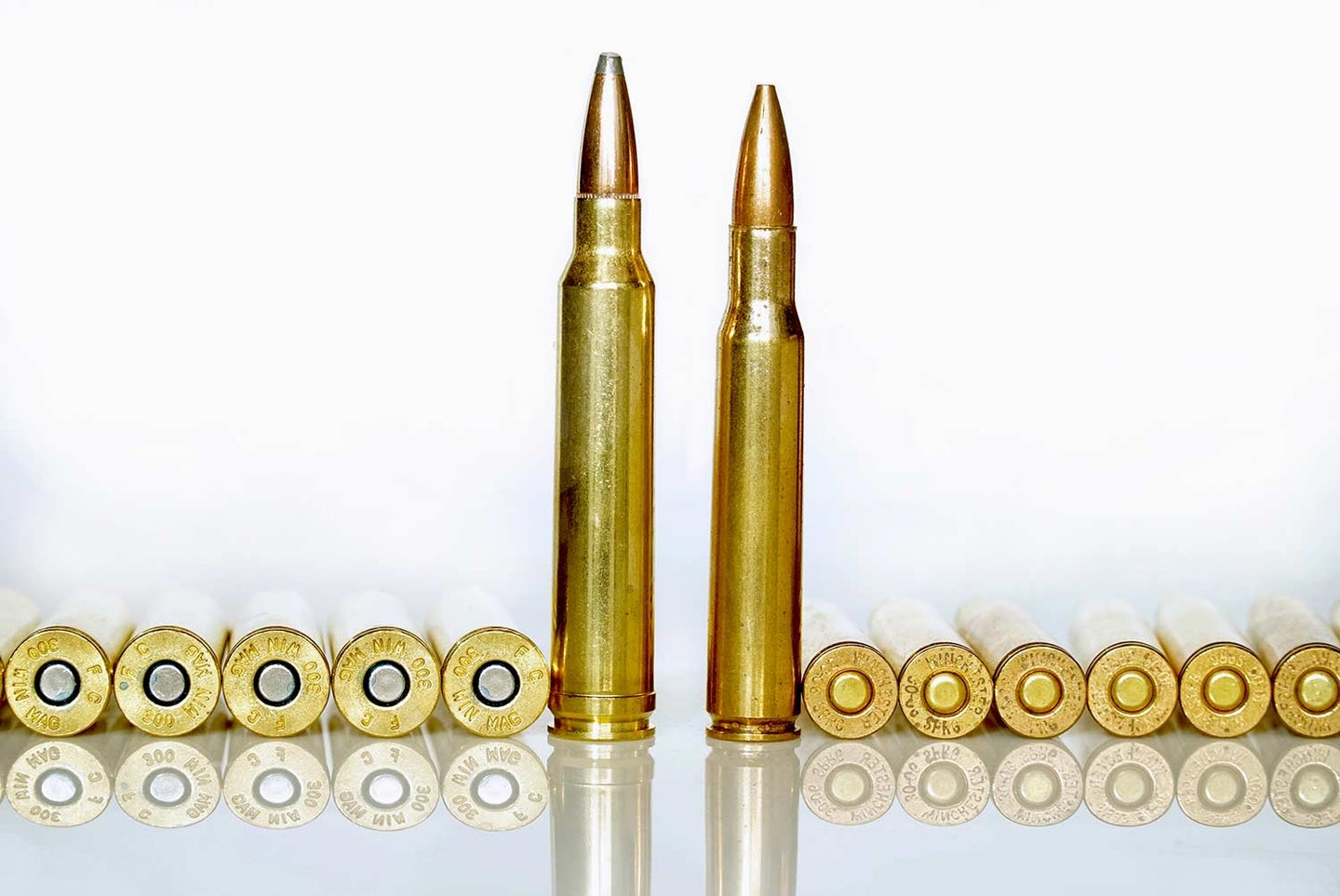 Let’s start this off with mountains. Mount Everest is the most famous mountain in the world. Despite the encouraging number of people who die on it each year, however, your chances of getting killed trying to summit are only about 4 percent. The real killers are two Himalayan peaks called Annapurna and K-2, both of which offer a 30 percent chance of cashing in. But who’s heard of them? Everest remains the mountain against which all others are measured.

Thus it is with the .30/06. It’s the Mount Everest of cartridges. It’s been around so long, and has achieved such vast success on so many fronts, that about the only thing you can compare it to is the .22 Long Rifle. But, as the British say, we must carry on regardless.

The .30/06 began in 1903, as the U.S. Cartridge Model of 1903. It was developed by the U.S. Army, but the Army quickly realized that it was not as good as the 8mm Mauser cartridge the Germans had developed, so it was redesigned, loaded for much higher velocity, and redesignated as U.S. Cartridge Model of 1906, or .30/06. It had the great good luck to be chambered in two iconic rifles, the Model 1903 Springfield and, later, in the M-1 Garand.

Almost immediately, the ’06 caught on as a sporting cartridge as well. Teddy Roosevelt took a Model 1895 Winchester lever-action .30/06 with him to Africa in 1909, where he shot almost everything with it and missed almost everything as well. One of the first hunters to take all the Boone and Crockett trophies was Grancel Fitz, who did it in the 1930s, ’40s, and ’50s with a .30/06.

This is the most popular .30 magnum of all, and it hit the market in 1963. It was Winchester’s .30-caliber contribution to the magnum craze, which was then what long range is today. Very sensibly, Winchester did not attempt to compete with the far more powerful and much harder-kicking .300 Weatherby Magnum. They necked down a .338 case to .308, pushed the shoulder forward, and shortened the neck. This created lots of powder space, in a case that was short enough to work through a standard-length action.

The .300 Winchester magnum was a success from the get-go, both for hunting and in long-range target shooting. Bullet weights range from 165 grains to 220, and velocities from 3300 to 2850.

This one is a no-brainer. On the average, an 8-pound .30/06 produces around 20-foot pounds of recoil, which is well within the tolerance of most shooters. You don’t need a heavy rifle, and you don’t need a muzzle brake unless there’s something the matter with you.

The .300 Winchester Magnum, on the other hand, kicks. The recoil calculator says it turns out around 26 foot-pounds, which I think is a lowball figure, because the round will give you a rap. I would not be happy with a gun of less than 9 pounds, or if lighter, if there was something the matter with me, a muzzle brake.

Here is a puzzle. One of the rules of accuracy states that the heavier the powder charge, the less accuracy you get. The .300 Win Mag, while it gobbles great gouts of powder, is also exceedingly accurate. If I wanted to build a .30-caliber rifle that produced pants-wetting accuracy, I would pick the .300 over the .30/06.

If there were any further endorsement needed, in 2010 the Army selected the .300 Win Mag for its Enhanced Sniper rifle, whose effective range is given as 1,300 yards.

Somewhere there must be an ammo maker who doesn’t load for the ’06, but I don’t know who that might be. It is very likely the most widely distributed cartridge in the world, and has been for many years. Ought-six ammo comes in all price ranges and degrees of quality, some of which I would not shoot on a bet.

The .30/06 can, and has, likely taken every game animal on the face of the earth. It’s overpowered for many of these critters and underpowered for some, but it will do it all. The .300 Win Mag, being more powerful but shooting the same bullets, duplicates the ’06.

In reality, neither cartridge is one iota deadlier than the other.

The generally accepted figure for the .30/06 is 3,000 to 4,000 rounds of first-class accuracy, depending on how it’s shot. Since the .300 Win Mag has the same bore diameter but holds substantially more powder, I’d say it’s good for 2,500 to 3,000 rounds. Either way, that’s a lot of shooting, and very few hunters will burn out a barrel for either cartridge.

There are no quirks, tricks, or peculiarities to either round. I have heard much made of the .300’s short neck, and the problems it can present, such as bullet intrusion into the powder space, but in real life I’ve found no difficulties. The .30/06 works well with medium-slow and slow powders, while the magnum is slow powders only.

Probably this category should not be in here, but what the hell. The .300 Win Mag was designed as a long-range cartridge, and the .30/06 was designed for an infantry rifle whose maximum effective range for aimed fire was 460 yards, which today is not long.

Winner: The .300 Win Mag. However, it’s more complicated than that. Because of such wonders as laser rangefinders and drop-compensating scopes and ballistic calculators and factory drop tables, you can greatly extend the range of a .30/06. People do it all the time with far less powerful cartridges.

The .30/06. How could I possibly pick anything else? I’d have to go into hiding. The .300 is a superb cartridge on all counts, but it’s a specialized long-range round which, unless you’re going to use it at long range is going to work against you.