What's the best 6.5 Creedmoor bullet to use for your hunting? In this edition of F&S Bullet Lab, we test Hornady's new Outfitter CX to help you decide 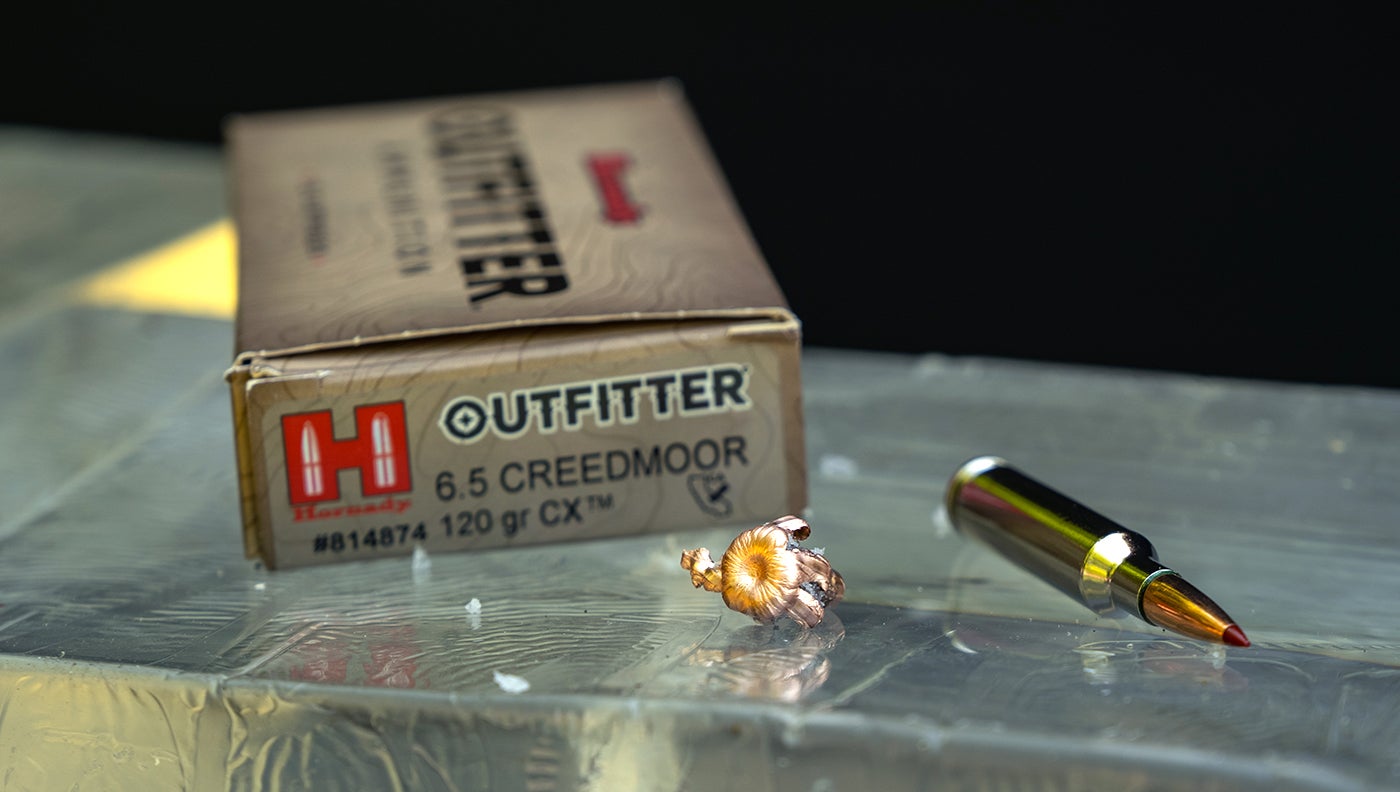 F&S Bullet Lab is a series in which shooting editor Richard Mann will be testing the most popular hunting bullets on the market by firing them into Clear Ballistics gelatin to predict their terminal performance in the field—and ultimately, to help you choose the absolute best bullet for your hunting. Check out how other 6.5 Creedmoor bullets, including the Remington Core-Lokt Tipped, Winchester’s Deer Season XP Copper Impact, and Federal-loaded Nosler Accubond faired in the test.

The new Outfitter CX bullet from Hornady represents the industry’s latest efforts to offer better-performing lead-free bullets for hunting. Very similar in design to Hornady’s GMX bullet, which has a good reputation for killing big game, the CX bullet is the next logical evolution from Hornady. When developing the ELD bullet line, Hornady discovered that the material commonly used for polymer bullet tips could erode under the high heat that can result from supersonic flight. The new CX’s Heat Shield tip prevents this tip erosion so that the bullet can maintain a predictable BC, and therefore flight path, all the way to the target.

But that’s not all there is to the CX bullet. It’s GMX-like mono-metal design offers 95 percent or better weight retention, and Hornady optimized the bullet’s groove geometry to maximize aerodynamic performance and reduce the bearing surface between the bullet and the bore. This reduction helps manage pressure and reducing fouling. The new CX bullet comes in 120-grain and 130-grain weights; we tested the 120-grain in 6.5 Creedmoor. Here is how it fared.

Fired out of a Nosler Model 21 rifle that has a 22-inch Shilen barrel, this Outfitter CX load had an average muzzle velocity of 2865 fps, with a standard velocity deviation of only 28.2 fps. Hornady advertises this load as having a muzzle velocity of 2925 fps, which was most likely obtained with a 24-inch barrel. With a BC of only 0.428, it registers about average or a little below when compared to most 120-grain 6.5mm bullets. However, the Heat-Shield Tip should help the bullet to maintain a constant BC during flight.

I fired three, three-shot groups off a sandbag rest with the Nosler rifle, which was wearing Tract Toric 2.5-15X44 riflescope set at maximum magnification. The average for those three groups was an uninspiring 1.50 inches. Granted, you don’t need a sub-MOA rifle/load combination for most big-game hunting, but that is what most of today’s hunters expect out of a good rifle with quality ammunition. It’s worth noting that sometimes all-copper or gilding-metal bullets require a good barrel cleaning prior to shooting in order to extract the most precision they can deliver. I’ve seen this on numerous occasions, so keep that in mind if you test this load in your rife. There’s just something the fouling of mono-metal bullets that tends to make this happen. Of course, the CX Outfitter load might shoot great out of your rifle. Just like people, individual rifles have likes and dislikes.

This is not an extremely flat-shooting 6.5 Creedmoor load, but for most of the big-game hunting that most of us do, the 120-grain CX’s trajectory is just fine. Zeroed in at about 2 inches high at 100 yards, you can hold dead on to 200, on the line of the back at 300, and about 12 to 16 inches over the back at 400 yards. And in a 10 mph, 90-degree crosswind, you’ll only see a foot of drift at that last distance. If that’s not a flat enough trajectory for you, you’ll want to look elsewhere for your Creed ammunition.

Many believe that 100-percent weight retention is the key to a bullet’s killing ability. It’s not. While it’s true that a bullet must retain weight in order to penetrate, penetration is also largely determined by the frontal area of the upset bullet (typically called expansion). Bullet’s that upset with a wide frontal diameter drastically reduce penetration. But bullets that open wide also enhance wounding. Bullet engineers seek to balance these two things. They tweak the design of the bullet to deliver as much upset as possible while still guaranteeing a certain amount of penetration. Your goal in choosing a hunting bullet is to decide how much of these things you need for each application.

I’d rate the 120-grain CX bullet’s performance from the 6.5 Creedmoor as middle of the road. It offers better-than-average penetration, with slightly less-than-average bullet upset. For deer hunters, this is useful on raking shots for which you need good penetration to reach vital organs. It should also work well for broadside shots on larger game and still deliver an exit wound, which contrary to those who believe energy dump is everything, it’s much easier to track a bull elk that is bleeding out of two holes as opposed to one. Overall, I would say that if you like Hornady’s older GMX bullet, you should like the newer CX bullet just as much.