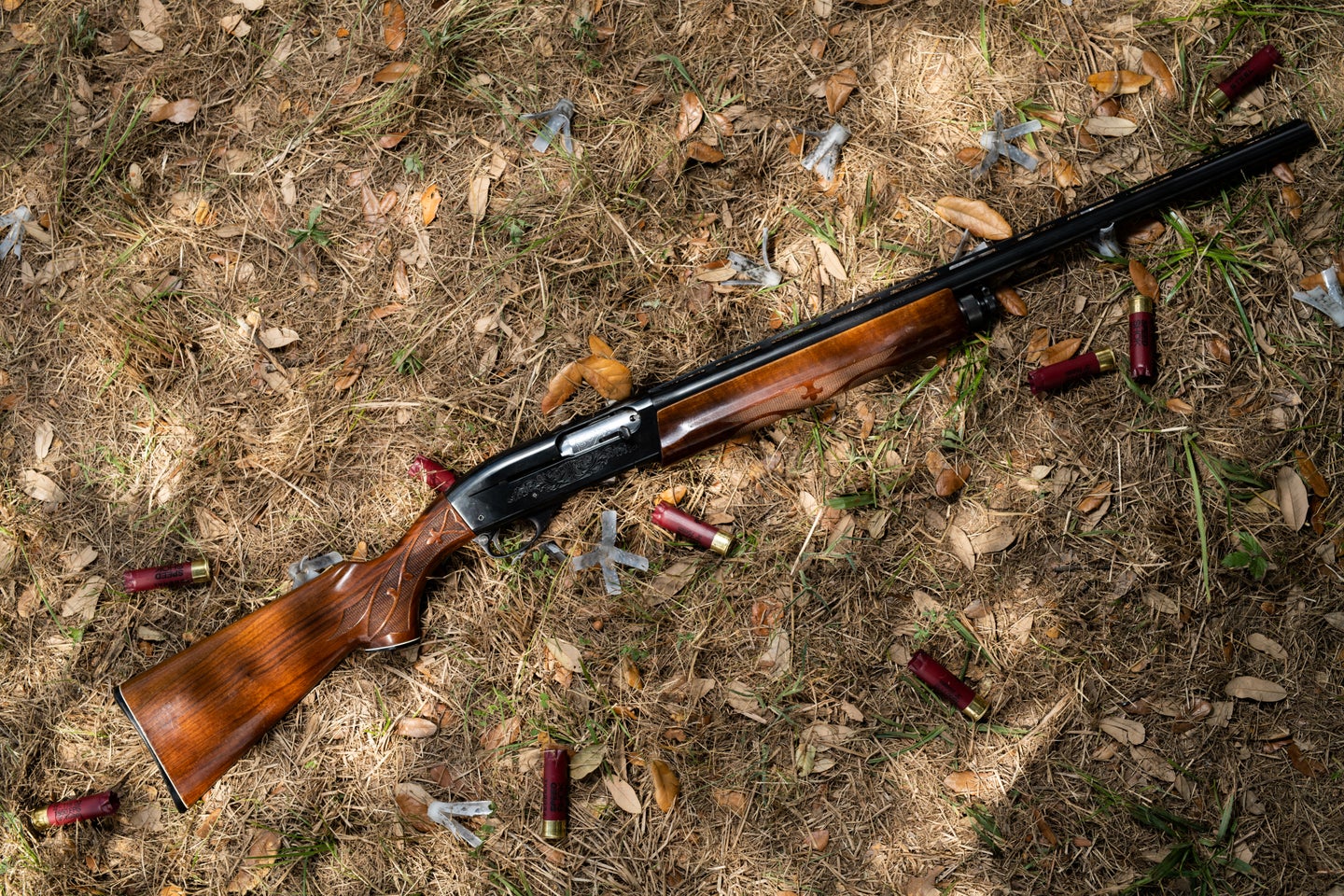 We tested the Remington 1100 during the September teal season in Texas. Stephen Maturen
SHARE

The Remington 1100 is one of the greatest, and most important, semiauto shotguns ever made, and even as it nears its 60th birthday, it’s still a favorite of many hunters. We brought an 1100 with us on our duck hunting shotgun test at Pintail Hunting Club, along with along with the current crop of waterfowl guns, to see if the old, early-60s classic still had a place in 21st century duck hunting.

Brief History of the Remington 1100

Revolutionary is an over-used word, but the 1100 was exactly that in the day. As the first successful gas-operated semiautomatic, it was the gun that changed shotgunning and turned so many Americans into semiauto shooters. There were gas guns before the were 1100s. John Browning was inventing gas-operated machine guns in 1900, but when it came time for him to invent a semiauto, he used the long-recoil method. World War II saw several advances in gas-operation design, and, after the war, gunmakers tried designing gas shotguns for the civilian market. Making a semiauto shotgun that would cycle a wide variety of loads reliably is a tough task. Remington engineers used computers to help design the 1100; in some ways, it was the first modern shotgun. When it appeared in 1963, the 1100 was instant success. Target shooters and hunters immediately realized the advantage of a reliable semiauto with the recoil-reduction advantages of gas operation. If they kept their 1100 clean, it would shoot reliably and kick softly, and the gun had a stock that fit almost anyone.

The 1100 was made in configurations ranging from short-barreled youth and upland models to trap guns. It was offered in every gauge except for 10 and in magnum and non-magum 12- and 20-gauge versions. Remington 1100s have shot almost everything that can be shot with a smoothbore—from doves to deer to all the clay target games. With Remington’s recent bankruptcy, production of 1100s ceased but it is possible that the new owners will once again produce 1100s.

The latest Blue Book of Firearms Values lists 12-gauge 1100s in top condition at $600 or so, with smallbores fetching $750 or more. People are starting to snap these old guns up and prices are rising.

Specs on the Remington 1100 Waterfowl

By today’s standards, the Remington 1100 shotgun has a lot of parts. In its time, it was a model of simplicity. Two metal friction rings/seals and a rubber o-ring slide onto the magazine tube, with the o-ring fitting inside the barrel ring, and the metal rings butting up against the piston. As with all gas semiautos, ports in the barrel (in the 1100, as with most gas guns, the ports are inside the barrel ring) bleed expanding gases out of the barrel and direct them into gas system, where they drive the piston backwards. A link from the piston to the bolt opens the action, ejecting the old shell and a return spring in the stock drives the bolt back into battery while a lifter raises a fresh shell from the magazine.

The moving parts of the gas system store, then release, recoil energy, which is why gas guns have such mild felt recoil. While the total amount of recoil is the same, it’s spread out over a much longer time than it is in a fixed-breech gun, and it feels like a shove, not a punch.

Remington 1100s predate both choke tubes and all 2 ¾ and 3-inch capability. Any 1100 made before 1986 will have fixed chokes. The only way to shoot both light target loads and heavy 3-inch magnums was to buy a magnum receiver and two different barrels for it. Synthetic stocks came along for the 1100 in the ’90s, and you can still buy them aftermarket if you wish. The gloss finish on the walnut-stocked 1100s, incidentally, was developed by then-parent company DuPont Chemical as a varnish for bowling pins, so it is made to be banged around. The barrel and steel receiver are deeply blued, which is out of fashion in these days of camo and Cerakote, but our fathers and grandfathers had no problem killing ducks with 1100s.

How We Tested the Remington 1100 Waterfowl

Since 1100s aren’t currently manufactured, we borrowed one for the test—a pre-choke tube, 2 ¾-inch, 12-gauge gun with a walnut stock and fixed Modifed choke. Unfortunately, there was an ammo shortage going on, and we weren’t able to find 2 ¾-inch waterfowl loads for the gun. With only 2 ¾-inch lead target loads on hand we had to do all our shooting with it at clay targets.

We also patterned the gun at 35 yards and checked its point of impact. We used 1-ounce, 1180 fps Remington Gun Club target loads of 8 shot. The gun shot a great 78-percent pattern with the target loads and would likely do even better with harder, larger steel hunting loads. The point of impact was a dead-on, flat shooting 50/50 above and below point of aim. Since we couldn’t take it hunting, we all shot it at 5-stand as much as we could. The problem was, the 1100 was everyone’s favorite gun, which made getting a turn with it tough. But we shared as best we could, and all shot the 1100 quite well. The trigger broke at 4.9 pounds, which is about as good as it gets for factory shotgun triggers.

With its all-steel receiver, the 1100 is heavier than most modern alloy-framed semiautos and it has a weight forward balance. It also has a stock that fits a large number of shooters. There’s enough drop to the stock, and the comb is thin enough, that most people, even those who usually need a lot of cast (lateral bend) to put their eye over the rib, find that an 1100 fits them. Add very soft recoil, and the 1100 becomes an easy and pleasant gun to shoot. Even today when other semiautos have become more popular for competition, you can see why the 1100 cleaned up immediately at trap and skeet back in the 1960s.

The old-school walnut and blued 1100 stood out among all the other guns on the rack, and if this test had been a beauty contest, there was no question about the winner. The 1100 had deep, rich bluing, some decent grain to its walnut, and the fluer-de-lis pattern checkering (pressed, not cut) has an attractive, retro look underneath a perfectly applied gloss coat. There’s a white diamond on the black grip cap that adds to its appearance as well. The 1100 definitely looks dated today, but our entire test panel loved its appearance, and the gun showed a level of fit and finish you don’t see in comparably priced guns today.

While 1100s have been used for everything a shotgun can be used for, the gun was developed before the development of “all-load” semiautos that shot light 2 ¾-inch target loads and 3-inch magnums without barrel change or adjustment. Also, older 1100s lack interchangeable chokes. You can compensate for fixed chokes by using different shells and shot sizes to vary your patterns, but there’s a limit to what you can accomplish. If you find a newer 1100, or one with a newer, RemChoked barrel, it will have tubes, increasing the gun’s versality. However, even a gun like our fixed Modified choke 1100 could serve as a duck, dove, sporting clays, and trap gun with ease. Find some 2 3/4-inch Winchester Long Beard or Federal or HeviShot TSS, and it would be your 40-yard turkey gun, too. At 8 pounds, it’s a heavy gun to carry, although countless thousands—maybe millions—of pheasants and quail have been shot with the Remington 1100.

Because this 1100 was A) borrowed and B) pristine, we babied it. But you don’t have to pamper 1100s. This is a tough gun, made of all steel and, as I mentioned, covered in a varnish designed to take hits from bowling balls. The biggest difference between an 1100 and a modern semiauto like the Beretta A400 or the SX4 is frequency with which you need to clean it. The 1100 is easy to take down and maintain, which is a good thing, because you’ll want to do it every couple hundred rounds—whereas an A400 might run trouble-free for 1,500 rounds or more between cleanings. Make sure you check the o-ring for wear and maybe keep an extra on hand. Put the two metal rings back facing in the correct direction and an 1100 will operate very reliably.

You can find an 1100 in good shape for $600 or so, and, to my mind, that makes it a great value—so long as it fits your needs. The 1100 is not as versatile as newer all-load guns with choke tubes, but it can do a lot of different shotgunning jobs, and it’s still one of the softest-recoiling semiautos ever made. It’s also a classic, and if it appeals to you have to own a neat older gun, that makes the 1100 an even better choice. You will not find a modern gun anywhere near this price range with the 1100’s level of fit and finish.

What the Remington 1100 Does Best

The 1100 does best what it has done best since 1963: It’s a gun that makes almost everyone who picks it up a better shooter. The soft-recoil, balance, and very-usable stock dimensions all combine to make this a gun that people like to shoot, and that they shoot well. Years ago, I asked a gunsmith in Texas why no one made a “dove special” shotgun. “They do,” he said. “It’s called a 20-gauge 1100, and some ranchers down here keep ten on hand for guests to use on September 1.”

What the Shotgun Does Worst

Great as the 1100 is, it is also 59 years old, and semiauto-shotgun design has passed it by. New guns are lighter, more versatile, and run longer between cleanings. In addition, you need to either limit yourself to light or heavy loads, or buy an extra barrel for your 1100. Or, if you like the basic platform but want more versatility, you can look for an 11-87, the 1100’s successor that came out in 1987. It is virtually the same gun but with a “self-metering” ring around the barrel that allows you to shoot 2 ¾- and 3-inch loads interchangeably, and all 11-87s have choke tubes.

The Remington 1100 is arguably the second-most important semiauto ever made after John Browning’s Auto 5. It changed America’s shooting habits and even today it’s still a great choice as soft-kicking, easy gun to shoot. When my kids started shooting, and I needed guns for then and another boy I was teaching to hunt, the choice was easy. I picked up a pair of 20-gauge 1100 Youth models. They were compact but fairly heavy guns for 20 gauge, but that weight made them easy to point and swing, and the weight and gas system made them very soft-kicking and therefore great guns for beginners to start with. The kids shot their first ducks, geese, pheasants, and one turkey with those guns. Currently, if you want an 1100, you’ll have to find one used, which isn’t a difficult task given that 4,000,000 were made. We can only hope that once the new ownership of Remington (now RemArms) gets up to speed they will start making 1100s and 11-87s once again.