Gunfight: The Winchester Model 70 vs. The Remington 700

Which is better, the Rifleman's Rifle or the best-selling big game rifle in the world? 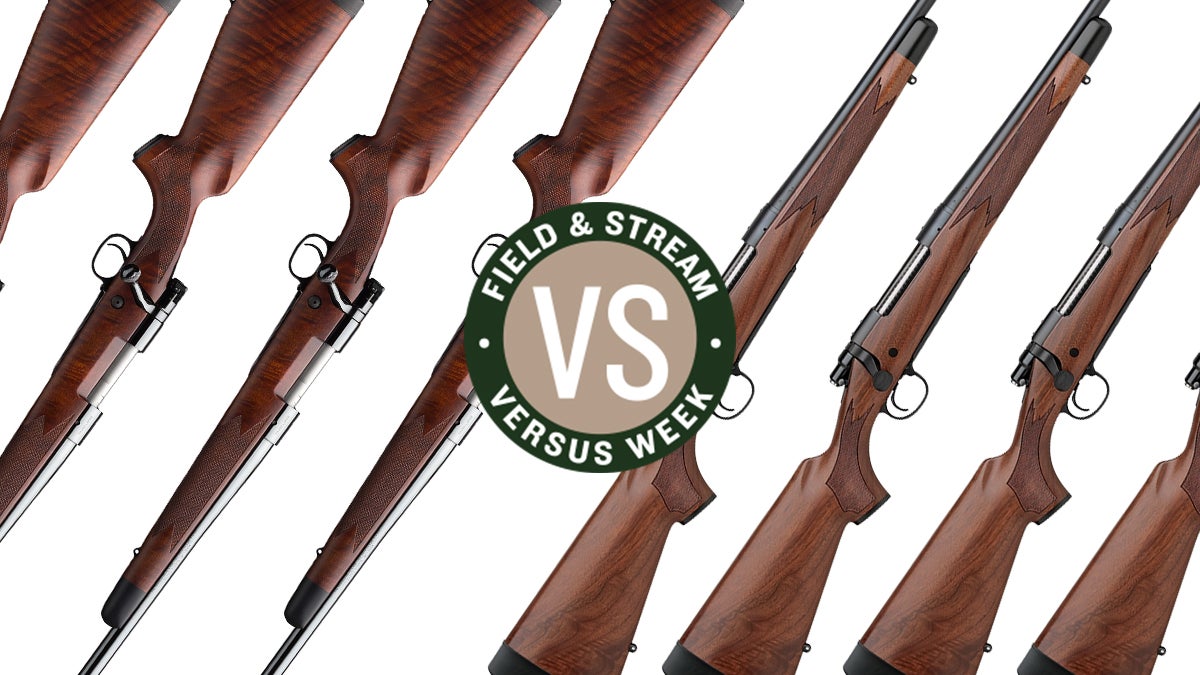 The Remington 700 and Winchester Model 70 are two of the most popular bolt-actions in the woods. Field & Stream
SHARE

Editor’s note: As hunters and anglers, we don’t agree on everything. We’ve even been known to argue on occasion. That’s why this week is all about figuring out who’s right and who’s just plain wrong. Every day we’ll be posting stories to get to the bottom of hunting and fishing’s most important debates—like 870 vs. 500, fixed vs. mechanical broadheads, and fly fishing vs. spin fishing.

The Case For The Winchester Model 70

(Note: Since its debut in 1936, the Winchester Model 70 has undergone major variations in its design. What I’m writing about here is the original, controlled-feed, Mauser 98-inspired version, which is the only true Model 70.)

In the depths of the Great Depression, when money was so tight that a dime was considered a decent handout, Winchester introduced a bolt-action rifle that sold for $61.25. In today’s money, this is way over $1,000, and it meant that either the Big Red W had gone completely mad, or that it had come up with something extraordinary.

The answer turned out to be “extraordinary.” The new gun was the Model 70, and someone labeled it “The Rifleman’s Rifle.” This was never defined precisely, but what people took it to mean was that when a shooter had been around for a while and really knew what he was doing, he would choose a Model 70. It was not something that everyone could afford, but it was something that everyone wanted.

The Model 70 actually benefitted from the Great Depression. In that time, before World War II transformed American manufacturing, a First-Class machinist who had a job was a lucky man, and if this meant working at Winchester Repeating Arms for low wages, so be it. The Model 70 was difficult to produce and, without cheap, skilled labor, it could not have survived.

The Model 70 was inspired by the Model 98 Mauser, a nearly perfect mechanism that was the final evolution of a series of military bolt actions. At its heart is a massive claw extractor. As a cartridge is pushed up by the magazine follower, the claw snaps over the case’s rim and holds it in place as the bolt shoves it straight into the chamber. When the round is fired, that same claw hauls the case out of the chamber.

Winchester adopted the Mauser design and added a refinement called a coned breech. This was a “cone” cut in the rear of the chamber, and if a bullet entered it cocked at an angle, the cone would pick it up and guide it in.

With or without the coned breech, this system is called controlled feed, or CF. In a properly set up rifle, it’s just about infallible. The Mauser 98 established a reputation for complete reliability under combat conditions, and went on to be the second most successful military rifle of all time, ranking only behind the AK-47.

African professional hunters, who stake their lives on their rifles’ reliability, choose CF to the exclusion of nearly everything else. In all my time in Africa, I’ve met one PH who used a double rifle, and one who used a Weatherby Mark V, which is a push-feed. Everyone else had either a CF Model 70 or a Mauser.

Winchester capped off the Model 70 with what I believe is the best trigger ever produced for a hunting rifle. It has only three parts plus one robust spring and a couple of lock nuts. Once properly adjusted (which takes considerable skill) it has a superb pull and, equally important, there’s nothing you can do to screw it up. Rain, snow, ice, sand, mud, dust, oil, no oil, slamming the bolt back and forth, over and over, none of it matters.

Finally, the Model 70 action is handsome. Good looks are subjective, but I’ve never found anyone who had more aesthetic sense than the beasts of the field who would put the Model 70 anywhere but first on the bolt-action beauty list.

All that aside, the Model 70 rifle was not perfect, especially in its pre- ’64 incarnation. Most models weighed a ton. A Standard Grade Model 70, with scope, scaled about 10 pounds. There was a “knot” on the barrel for the rear sight that looked like a steel tumor. Winchester placed a barrel band about midway up the tube that pulled it down into the fore-end and made adjusting the bedding screws exponentially more difficult. The stocks had far too much wood in them, and the checkering, by today’s standards, was woeful.

And then there was quality control, lack of. Starting in the early 1950s, the entire Winchester line went into a decline. Most of the skilled machinists had departed for better-paying jobs in other industries, and the machinery at the New Haven plant was wearing out and not being replaced. Winchesters made in the ten years leading up to 1964 ranged from awful to heart-wrenching. These were replaced by the post-64 models, over which we shall mercifully draw a curtain.

Oddly, the story has a happy ending. FN bought the Winchester name, and now makes Model 70 parts in an ultra-modern plant in South Carolina. The rifles are assembled in Portugal, and are not only better than any Winchesters that have gone before, but are about as good as anything you can get from a factory.

The Model 70 represents the final flowering of a tradition that began with the Kentucky Rifle—a hunting rifle is not only a firearm, but an artistic statement.  During the heyday of the custom hunting rifle, top gunmakers considered only two actions—the Model 70 and the 98 Mauser—as worthy of their time and labor.

Now, it’s a different world. Function trumps form, and accuracy is everything. Wood has been replaced by fiberglass and Kevlar. Stocks that were once sleek and graceful now sprout wart-like knobs and bumps. Weird angles grow from unexpected places. Weight no longer seems to matter because no one walks. Shooting at extreme distances is substituted for hunting.

So be it. But the Model 70 still has its place. In its time, it was the best, and if you believe that a rifle should look like a rifle, it still is. —David E. Petzal

The Case For The Remington 700

I used that 700 for hunting and competition, and it’s the rifle I learned to handload for. It digested thousands of rounds, shot great, never hiccuped, and that built a lot of confidence. Since then, I’ve owned many 700s, and in 43 years only experienced two problems. The first was in 2006. A gunsmith Cerakoted the extractor on my .300 Win. Mag. making it so slick it would slip off a sticky case. The second occurred in 2012. Remington sent me a 700 chambered for the .375 H&H without a firing pin. I should have recognized that for harbinger it was.

My first Model 700 will always be my favorite, but I have fond memories of others. I’d wanted a .264 Winchester Magnum when I bought that .270. I finally got one—a 700 Sendero—and used it to take my first mule deer. I also had an all-stainless .257 Roberts that I dropped in an HS Precision stock. It was eye-popping accurate, and my gun writing license should’ve been revoked for trading it. Surprisingly, the best shooting 700 I’ve owned was the inexpensive SPS Tactical model. I once used it to vaporize a fly on a target at 100 yards. It was a bloody delightful shot I’ve yet to recreate.

The Remington 700 is a push feed (PF) action and Model 70 enthusiasts act like they wouldn’t trust one on a rat shoot. They claim the extractors and ejectors regularly fail and that a 700 will jam safe-tight if an African buffalo just gives you the stink eye. Of course, none of this is true. But like with all PF actions, a failure to fully cycle can result in a double feed. This happens when you partially chamber a cartridge and then attempt to cycle the bolt again. On the other hand, because of its spring-loaded ejector, a Model 700 will eject a cartridge earlier than a Model 70. And, unlike a Model 70, the ejection force is not dependent on how hard the shooter works the bolt.

The 700’s trigger is a sore spot. The early Walker-designed versions have been known to fire when the safety is pushed off. Though I’ve never witnessed it, I don’t doubt it’s happened. It just doesn’t bother me because I always replace factory 700 triggers with one from Timney. They work better than Remington’s old and even newer X-Mark Pro trigger, and I fully endorse the upgrade.

Around the same time Remington forgot the firing pin in my .375 H&H, the company was starting to slip. Remington went bankrupt in 2020, and the new owner, RemArms, says they plan to build 700s again, so we’ll see. There are however thousands of 700s on the used market and they’re an excellent investment. With so many aftermarket parts and accessories, even the rough ones can be tweaked into splendid rifles. I’d buy a good used Model 700 before I’d ever consider a new or used Model 70.

Others will disagree. Model 70 fanatics claim the Mauser-inspired CF action is an un-jammable, fool-proof system. It’s not. On all the Model 70s I’ve seen, the tip of the fixed ejector is located behind the rim of the cartridge in the magazine. Just enough so that short-stroking the bolt to this gap can create a double-feed/jam when the bolt is pushed forward. I’m talking about a jam Capstick would lie about and Hemingway would struggle to describe.

Model 70 fans also tout the fierce strength of the CF Model 70’s non-rotating extractor. The reality is these extractors, just like all extractors, can break. It’s why savvy African professional hunters, who swear by CF Model 70s for dangerous game, carry an extra extractor—already fitted to their rifle—into the bush with them. It’s probably shoved in a bag with the bottle of Jägermiester they’ll use to drown out their sorrows when this happens.

Don’t get me wrong, original New Haven, Connecticut Model 70s were nice rifles, but they won’t cycle or feed any better than a Model 700, even if both are held sideways, upside down, or cockeyed. (They won’t shoot any better either.) The post-64 push-feed Model 70s, made to directly compete with the 700, were decent, too. The current Model 70 returned to the CF action, and it is highly regarded. But it’s not made in the U.S. anymore. Mom’s been gone for nearly 15 years, and I can hear scolding me now, “But by God son, it’s still a Winchester.” She’s probably still mad at me.

Jack O’Connor helped make the Model 70 famous. We share birthdays, but I never cared much for his writing or the rifle he championed. His disciples, shooting elites, and old curmudgeons who still drink Sanka and lust after Jane Russell like to call the Model 70 “The Rifleman’s Rifle.” They can have their catchphrase; the Remington 700 is the best-selling big game rifle in the world, and it was for damn sure the Hawken rifle of the 20th century. —Richard Mann