How to Remove Gunk from Your Rifle

A trip to the range reveals a lesson in gun maintenance 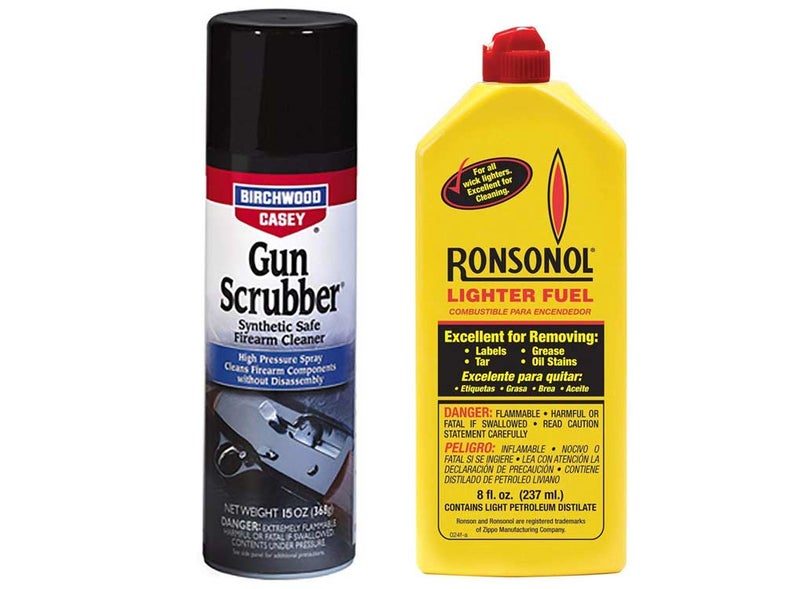 This all started because I grew weary of shooting small, sensible cartridges that did not burn 70 grains of powder with every pull of the trigger and did not cause spinal misalignment. “The hell with pissant cartridges,” I said. “It’s time for the manly blast and sphincter-clenching kick of the .338.”

So I got out my .338. I had bought this rifle from Ed Brown Precision in 2005, back when they were making rifles. It’s shot all manner of beasts and has performed flawlessly for 13 years. It went to Africa at least twice, and to New Zealand, and many other places in between.

However, it had sat in the rack for a while, so before I took it to the range I thought it best to take it apart and see what was what.

When you do this, you look for two things. The first is rust and the second is pooled oil. No matter how careful you are, oil and solvent leach out of who knows where and pool in odd places. When I took the .338 apart, the front guard screw was covered in goo, and there was something white and crusty—it may have been bird sh*t—on the floorplate release that was causing it to hang up. The receiver also had oil where it didn’t belong. I cleaned all this up, but there was more.

I put the rifle together and went to the range at 8 a.m. on a 30-degree morning. Before I fired the first round, I snapped the trigger a couple of times as I always do on a cold day, just to make sure the firing pin is falling. It was. I fired 20 rounds. It worked fine. Spiritually uplifted and bleeding lightly from the ears, nose, and eyes, I took the gun home to clean the barrel.

By now the rifle had been in 30-degree cold for 4 hours. I finished cleaning the bore, put the bolt back in, and snapped the trigger. No snap. Tried again. No dice. The sear would not lift, and the action would not cock. There was some kind of ugh in the trigger, and it had taken 4 hours to congeal, but congeal it finally did.

The way you cure an oil-fouled trigger is to take the action out of the stock, remove the bolt, and hose out the trigger with Birchwood Casey Gun Scrubber, and then with Ronsonol Lighter Fluid*. Do not apply a few drops and consider your work done. Soak that trigger! I did, and the trigger went back to working. (If you find yourself where there is no Gun Scrubber or Ronsonol, you can do the job with boiling water or white gas, which you do not boil unless you are insane.)

After the lighter fluid, you’re done. Do not oil the trigger. Ronsonol is oily enough to do the job.

If I had been hunting with the rifle, I would have tried the trigger at 8 a.m., assumed it was fine, and then found out by noon that it was not fine, quite possibly by way of a lost shot that I would never get again.

In addition to degreasing the trigger, you’re obliged to take the bolt apart and degrease the firing pin, the firing-pin spring, and the interior of the bolt body. If you don’t know how to do this, have a gunsmith do it. Gunsmiths know how because every year they get to salvage a steady parade of gummed-up, rusted-solid, gas-fouled rifles that no longer function.

*Any shooter who doesn’t have an 8-ounce bottle of Ronsonol lighter fluid on their workbench lives in Outer Darkness. I use it for cleaning triggers, degreasing scope-mount screws, and cleaning the insides of case necks. Nothing else works half as well. It also removes grease stains, and even works in cigarette lighters. You can dispense it in minute amounts, which means that a bottle lasts a long time. When you go to buy it, you’ll find that many young people have never heard of it, as the only kind of lighter with which they are familiar runs on butane.