Hunting fields for green heads seems simple: Find ducks, get permission, and set up at the X. But the game is rarely that easy. Here's how it's done 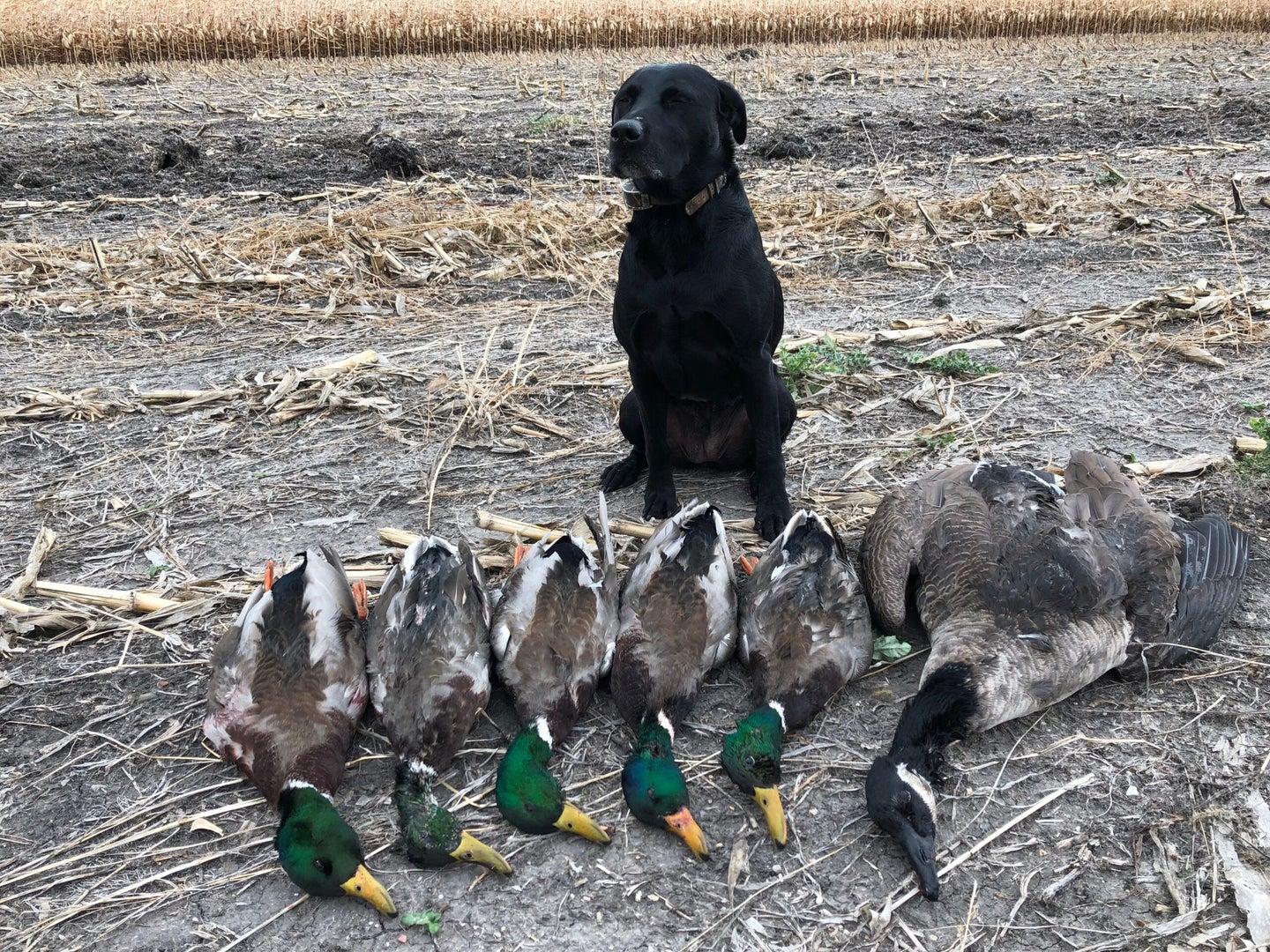 One great thing about a field hunt for ducks is the occasional bonus goose. Brian Lovett
SHARE

Other than green timber, dry-field hunts might evoke the most iconic waterfowling images, complete with whirling clouds of mallards set against broad vistas of the American heartland. And, actually, enjoying good field shoots isn’t that tough—so long as you’ve located ducks, acquired permission, set up decoys and spinners, and concealed yourself. But as with most outdoors pursuits, the devil is in the details, especially when dealing with wary, pressured green heads. Here are some tricks can help you forge lifelong memories in the fields.

How to Scout for Field Mallards

Without hours of windshield time, you simply won’t consistently kill green heads in dry fields. To start, identify likely areas with lots of harvested agricultural fields. Good early season options include rye, oat, wheat, barley, or pea fields. As autumn progresses, birds have broader choices, including beans and corn, which is their favorite. Seek fields near potential roosting waters, such as large lakes or rivers, or state or federal refuges. Follow ducks as they leave roosts to see the general direction in which they travel, and then search for hot feeds.

Sometimes, you’ll have to adjust scouting trips based on conditions. Early in fall, during stable weather, ducks typically make two feeding forays per day—at dawn and near dusk. During rainstorms or similarly bad weather, they might leave the roost late and make only one feeding flight, staying in a field much of the day. And when frigid late-season conditions arrive, they might also only feed once per day, usually during afternoon or right before dark.

Almost all field-hunting opportunities occur on private property, so you’ll have to contact landowners for permission. Online maps with tax information help tremendously. When seeking permission, be polite, direct and respectful. Promise to obey all rules, and follow up with a gift or thank you card.

Concealment might be the No. 1 consideration for fooling field mallards, especially if they’re mixed with sharp-eyed geese. Low-lying layout blinds provide a great solution, obscuring your outline and allowing some movement. However, you must usually augment blinds with natural or artificial materials that match field litter.

How much cover suffices? An old joke suggests that when you think you have enough, you’re about halfway there.

Blending in is fairly easy if your setup has sufficient texture, like fields with tall stalks of harvested corn or milo interspersed with stubble on the ground. Weave lots of stubble into the straps on your blind—especially the flaps on top—and pile it around the front sides and especially back of the layouts. In such cover-rich situations, you can typically set blinds up in near your decoy spread, usually 20 or so yards upwind of your kill hole, where you expect birds to finish. Just be sure to offset them somewhat to the left or right so decoying ducks won’t look directly at the layouts while finishing.

Don’t Forget to Add Outside Cover

In cover-challenged scenarios—such as harvested oat, wheat, bean or hay fields, which often resemble the top of a pool table—you’ll typically have to cut supplemental cover like grass or weeds from nearby ponds or ditches. Use a weed trimmer to mow lots of cover quickly. Or, consider purchasing a bale of hay from a local farmer. Artificial cover options, such as raffia grass, can also help your blind blend in.

Read Next: 6 Hacks for Your Layout Blind

When adding outside cover, you’re essentially creating a large but seemingly innocent pile of stuff near your decoys. Mallards will see the pile, but they usually don’t associate it with danger. It helps, however, to lump your layouts closely together—even shoulder to shoulder—to reduce your overall profile. Additionally, place your hide perpendicular to your decoy spread instead of upwind so ducks will focus on the dekes and not the blinds as they approach from downwind. This will still allow for quality crossing shots.

If layout blinds aren’t your style, try a commercial upright panel blind, which lets you sit comfortably instead of lying down. These stick out more, but they can be surprisingly effective for field ducks. Again, consider setting them up perpendicular to your spread so birds don’t focus on them while approaching.

Some hunters use only Canada geese or snow geese decoys for field ducks, because hungry green heads decoy readily with geese, and using honker or snow decoys also lets you capitalize on bonus opportunities for geese. Other folks compromise and mix a few duck decoys with geese, often near the kill hole, where they anticipate birds will try to land. It’s usually best to place goose decoys downwind of the duck fakes, as the geese are larger and more visible. Further, birds often feed into the wind in fields, and ducks seemingly try to stay ahead of geese when on the ground.

Realistic full-body decoys work best, but it’s difficult to lug load after load of large fakes into a field. To boost numbers, mix in some shells, silhouettes, or windsocks, which are lighter and easier to transport. In general, place your best looking decoys—typically flocked full-bodies—at the head (downwind edge) of the spread, as approaching ducks will spend more time over them and might smell a rat if something looks off. Also, if you use some larger shells, you can place those around or even atop field blinds, offering more concealment.

How Many Decoys Do You Need?

Decoy number requirements vary. For small-scale hunts, when perhaps only two or three dozen birds are using a field, or when you must carry decoys on your back or in a sled instead of driving into a field, you can get away with a few dozen blocks. For larger-scale efforts, 20 to 25 dozen fakes isn’t out of the question.

Regardless of your spread size, keep the configuration somewhat loose, and make sure there’s a large landing area—the kill hole—where you want to shoot birds. U- or crab-shaped configurations work fine, as do similarly configured spreads with three or four stools of decoys. During windy days, cluster the decoys closer together and shorten the overall downwind length of your spread. That way, birds that approach low won’t fly over loads of decoys before reaching the kill hole.

Why You Need Motion in Your Decoy Spread

Movement adds realism to any decoy spread, and it really helps with field mallards. Most veteran hunters use about four to eight spinning-wing decoys to make their spreads come alive. However, they sometimes handicap their efforts by not placing them correctly.

First, don’t set spinners in a large cluster of decoys. Leave at least a 10-yard clearing around each spinner so ducks have plenty of room to land. Without that, birds might make endless passes instead of committing. Also, remember that spinners are a focal point, so set them at least 20 yards from hunters. That way, ducks will focus on the movement and not your blinds when approaching.

In addition, use spinners with an intermittent-run option, and leave them in that mode instead of running nonstop. This seems to help birds finish better. Sometimes, you might even have to turn spinners off via remote control if finicky birds flare.

Flagging can also attract distant ducks. Try one of the many commercially manufactured goose flags, or make your own using a dowel rod and durable material. Use an exaggerated flapping motion, which mimics a duck or goose fluttering down for a landing, for distant birds. As ducks approach close, simply shake or quiver the flag just above your blind.

One final consideration: When field hunting with a large group, choose a pit boss who will lead calling efforts and call the shots. The leader should be experienced, decisive and in control. This job is critical for facilitating a safe, coordinated and more successful hunt.