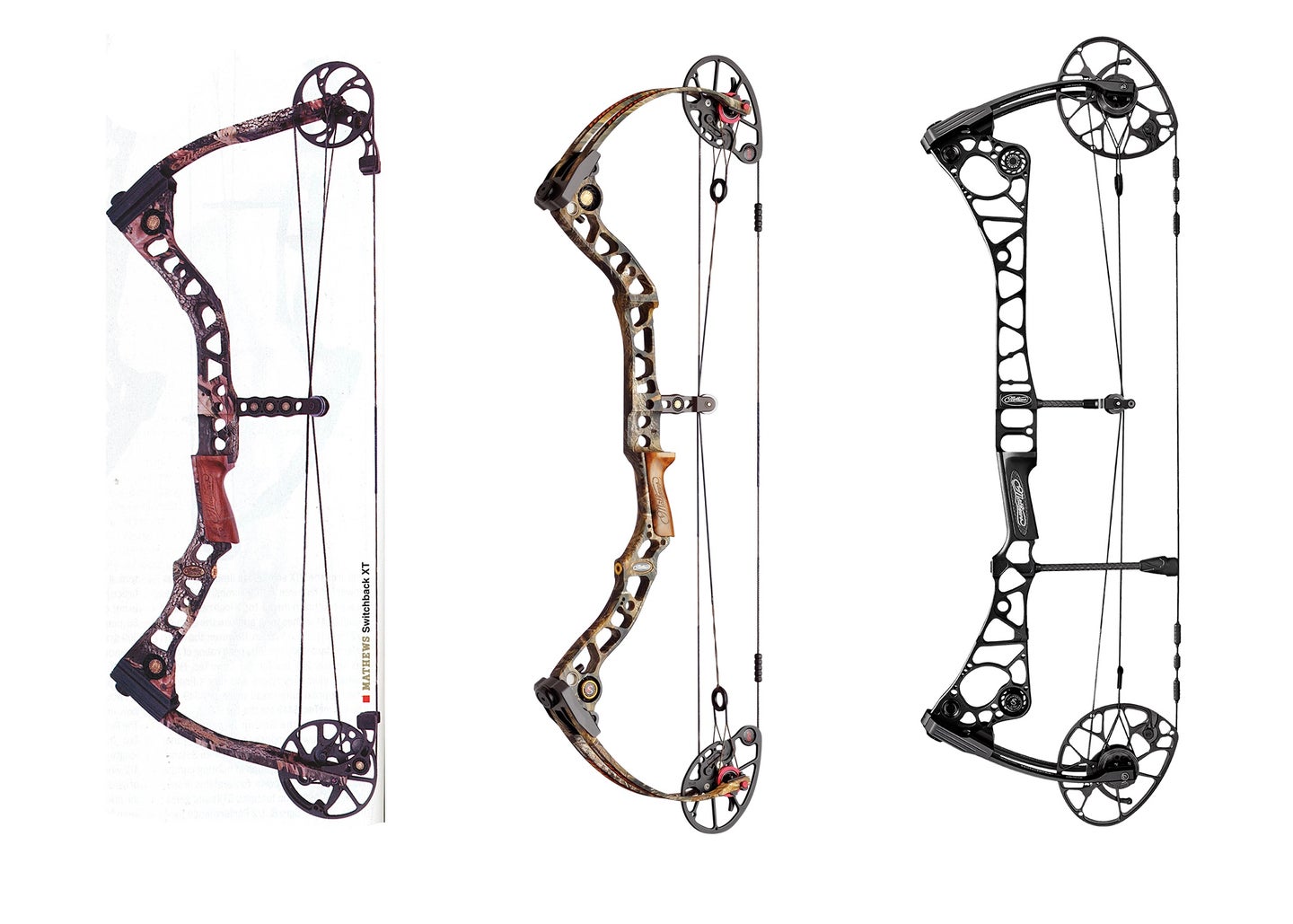 The 5 Best Mathews Bows Ever Made

From the SoloCam to the CrossCentric, here are the most innovative and best compound bow models from Mathews Archery

I’ve been testing the best compound bows head-to-head for Field & Stream since 2013. In that time, no other hunting bow brand has caused more of a reaction among readers than Mathews. On the one hand, you have Mathews Archery shooters who are fiercely loyal. Put simply, if Mathews doesn’t win, those bowhunters believe we’ve done something wrong. Then there are the archers who shoot something besides a Mathews compound bow. And when Mathews does win, these folks assume it’s because we took a bribe.

Compared to the anger I’ve seen come from the results of our bow tests, bickering over rifle calibers—like .308 vs. 6.5 Creedmoor—seem like playground spats.

But that enthusiasm for bowhunting—and for the debate over the best compound bow—is exactly why we’ve decided to do a run-down of the five best Mathews bows ever made. After all, Mathews is a company that, since 2013, has won our bow test three times and finished runner-up twice. (Due to COVID, we were not able to hold a test last year to determine a Best of the Best winner in the Best Compound Bow 2021 category.) Only Bowtech has been as competitive as Mathews.

How We Selected the Best Mathews Bows

Of course, picking the “best ever” from a lineup of guns and calibers is pretty easy. You just choose the red-meat classics that’ll keep the masses happy (even if classy folk like you and me know better). But compound bows are generally discontinued after a couple years. Plus, they’ve gradually gotten better over time. The best Mathews bows of the ’90s would get crushed by virtually any of the bows we tested last spring.

So, we just pick the newest compound bows, right? Not so fast. For all the objective testing we’ve done, there’s still a lot of subjectivity in picking a favorite hunting bow (i.e., that brand loyalty referenced earlier).

So, when I sat down to come up with this list, I wanted references for second opinions. First, I reached out to my buddy Danny Hinton. Hinton is a former pro-shop owner, Mathews dealer, bowhunter, and a member of the bow test panel since 2013. He’s also afflicted with a condition of saying exactly what’s on his mind at any given moment—for better or worse.

But I wanted a third opinion—so I went straight to the source and interviewed Mathews founder, Matt McPherson. An inductee to the Bowhunter’s Hall of Fame, McPherson has that lightning-in-a-bottle combination of engineering talent (he builds guitars on the side), business savvy, and approachable personality.

His story in the archery industry began in 1985, with McPherson Archery. The brand was making dual-cam bows in those days, including the first compound bow with more than 50 percent let-off. But McPherson found himself at odds with his investors at times, so he ended up selling McPherson Archery in 1987.

Soon after, McPherson had a new concept for a bow—the single cam—and he launched it with a new brand, Mathews Archery, in 1992. Mathews has since launched nearly 200 new bow models, if you include bows under their sister brands like Mission and Genesis.

Of those 200, here are the five we’ve narrowed down as the best Mathews bows of all time.

Mathews rolled onto the bow-building scene with a marketing campaign that highlighted the flaws in two-cam bow technology of the day—namely, keeping the cams in sync. But with one cam on the bottom limb and a round idler wheel on top, “SoloCam” bows didn’t have synchronization issues. The first Mathews was called the Standard, and the second was the UltraLight—a bow that McPherson still regards as a personal favorite. Company sales increased by 400 percent that year.

Perimeter-weighted single cams were soon to follow—an engineering innovation that McPherson considers to be one of the company’s highest. Not only were those bows smoother, quieter, and easier to tune than two-cam bows of the day—they were often faster, too.

The Z-Max was the first Mathews with a perimeter-weighted cam, and it was followed up with the MQ1. Weekend 3D shoots were popular at the time, and virtually all of people I knew shooting the “Bowhunter Release” category shot MQ1s. I got one for Christmas in 1999, when I was 16, and I hunted with it for the better part of the next decade. I shot some of my best bow bucks with that bow—which I still have.

“It was the most parallel limb bow at the time,” McPherson says. “It was so smooth that it was in a class of its own. Of course, if you shoot one against one of our bows today, it’s terrible. But back then, the perception was no recoil.”

Many veteran bowhunters still regard the MQ1 as the brand’s all-time best. With a 7.5-inch brace height, 37-inch axle-to-axle length and 308 fps IBO rating, it had target bow specs by today’s standards, but was a hunting machine at the time.

If any bow can unseat the MQ1 as a fan favorite, it’s the Switchback XT. Another single cam, the XT was introduced in 2006, following the original Switchback. At 31 inches axle to axle, it was about average-size by today’s standards, but it was the must-have compact bow of its day, with limbs that were more parallel than ever as well as a harmonic dampening system in the riser that seriously cut down on vibration.

“One of the things we did at our show was drop a bare riser on the floor with no dampers, and it sounded like a bell,” McPherson says. “Then we stuck the dampers in, and it’d go dink. It was great proof. We sent one of those risers to all the dealers, so they could show the difference to customers.”

The Switchback XT had a 7.5-inch brace height, but was speedy at 315 IBO. “That bow was just bullet-proof,” Danny Hinton says. “I didn’t sell them at our shop, but I worked on a bunch of them. To this day, if you look on forums and classifieds, you’ll see guys looking for a Switchback, or talking about how much they regret selling the one they had.”

In addition to just being a good bow, the Switchback had a good name and launched with good timing. Outdoor TV was soaring in popularity in the mid-2000s, and Mathews did a good job seeding their bows with high-profile personalities like Tom Miranda and Lee and Tiffany Lakosky.

With single-cam bows selling like 2020 toilet paper, McPherson famously said he didn’t see how Mathews would want to make a two-cam bow. But by 2010, the two-cam competition was getting better. “Sometimes you have to backtrack a little bit to be sure you’re making good business decisions,” he says now.

Knowing he needed to launch a two-cam bow of his own, he bought back the name of his original company—McPherson Archery—and under that, launched the Monster series. The XLR8, with a 5-inch brace height and 360 IBO, stands to this day as the fastest “Mathews” compound bow ever made.

At the height of his business, Hinton and his employees shot Monsters themselves. “That was when PSE had some scorcher bows, but a properly tuned Monster would whip their ass,” he says. “It was just a better bow; it was heavy but it shot great.”

Sales of single-cam bows were still strong, making the Monster a bow that was, in some ways, ahead of its time. In explaining the differences in that bow and comparable “hatchet cam” speed bows of the day, McPherson talked about ratios and bell curves—stuff that’s admittedly over my head. But one of the biggest advancements of the Monsters was the Advanced Vectoring System (AVS), seen to this day on the CrossCentric series (more on those in a bit).

“There’s a price you have to pay for speed, and it’s stored energy,” McPherson says. “You have to pull harder and longer. Hatchet cams had really high-tension strings at brace position (making the bow more demanding to draw from start to finish). We ended up making low-tension brace position strings, and it made (the Monster series) draw smoother and shoot better.”

The Best System Yet

In 2015, Mathews launched the “No Cam” HTR—a bow that didn’t do particularly well in our test, but it was something new and different. McPherson calls it “the most tunable bow in the history of mankind.” Sales weren’t as good as he’d hoped, but the No Cam was in many ways the stepping stone to the CrossCentric Series—the hybrid two-cam system still used today, and that first launched with the 2016 Halon series.

The Halon came as a surprise to us, since it had two big cams and was marketed as a true Mathews. In addition to those and the AVS system, the Halon sported short, “wide stance” parallel limbs and a long Dual-Bridged riser. That’s really what set the series apart.

The Halon 5 took Best of the Best honors in our 2016 test. There’ve been subsequent bows in the CrossCentric series including the Triax, Vertix, VXR 28, and V3, plus ladies’ models like the Avail and Prima. All have had incremental improvements like user-friendly draw length/weight adjustment modules, dovetailed sight mounts, and silent connection systems for pull ropes and slings—but they’ve been based on the same proven design. That’s for good reason: Since the introduction of the Halon, Mathews has either won or finished runner-up in all of our bow tests.

In my graduating high-school class of 29 kids, there were three or four of us into bowhunting—and we were only into it because we were into deer hunting. There were no in-school archery programs, but that changed big-time in 2002, thanks to a joint effort between the Kentucky Department of Fish and Wildlife and Mathews Archery.

The Kentucky Archery in Schools Program offered students of any age, race, gender, or ability to participate in a team sport. Indoor target archery exploded in popularity, and the program was soon renamed to the National Archery in Schools Program (NASP) due to nationwide interest. Now, nearly 14,000 schools nationwide have NASP programs—and I know of competitors who’ve gotten college archery scholarships.

Since the inception, the single-cam Genesis has been the official compound bow of the program. With a 15- to 30-inch draw length and 10- to 20-pound draw weight, the Genesis will stick arrows in the target and fit just about anyone. “In 2000, we wondered how we could promote archery in schools with something that was super simple to use,” McPherson says. “I was talking with a buddy of mine who’d worked with a bunch of kids, and he said kids don’t need a sight to learn how to shoot. They pick up instinctive shooting quickly. I knew if they didn’t need a sight, we could make this happen quickly.”

The Genesis generates more power than a recurve of comparable draw weight, and it’s easier to handle. McPherson says some 20 million kids around the world have learned about archery with that bow. And maybe it’s no accident that movies like “The Hunger Games” and Disney’s “Brave” followed soon after—and that the Archery Trade Association reported a 20 percent increase in archery from 2012 to 2015.

Considering all of that, maybe the best Mathews bow of all time is also the simplest one.