The 6.5 Creedmoor and the .308 Winchester are two of the very best big-game cartridges, and both are more than capable at long range. But only one can win this showdown 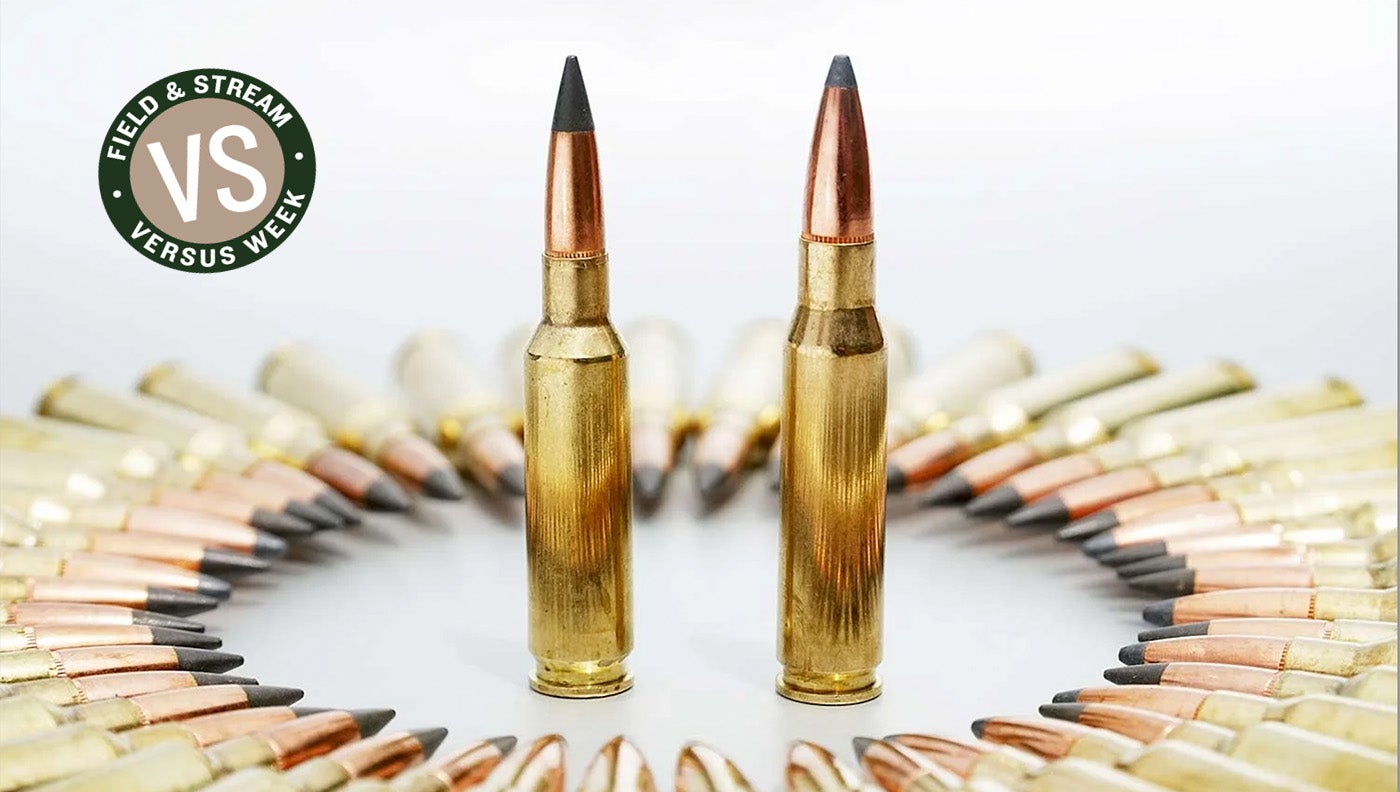 Because it is impossible to write enough about the 6.5 Creedmoor these days, my editors have asked me to compare it to the tried-and-true .308 Winchester, and I’ve agreed. Comparisons are not always odious. Gun writers depend on fees from cartridge comparisons to pay the mortgage and bribe officials at state agricultural and mining schools to take their kids. Some comparisons are fraudulent, for example, the .270 versus the .280. On paper, the latter has a slight edge. In real life, you could shoot every beast that has walked the planet Earth since the late Jurassic and not see a difference.

Some comparisons are both interesting and valid, on the other hand, and the .308 versus the 6.5 Creedmoor is one.

The .308 was worked up by U.S. Army Ordnance in the early 1950s for shooting people, and it has excelled at that and every other use to which it has been put. It was an immediate commercial success and perpetually rides near the top of the best-selling-cartridge lists.

The 6.5 Creedmoor was designed by Hornady for long-range target shooting, reached the market in 2007, and spent its first few years in comparative obscurity. It was made for a bullet diameter that American shooters had previously treated with massive indifference, and named for a long-vanished rifle range that hardly anyone remembers, or spells correctly.

But it was the right round at the right time. It arrived when long-range madness had arrived in its full fury, and it was very, very good at long range. Then the hunters caught on, and today there is hardly a bolt-action rifle that’s not chambered for the 6.5 Creedmoor.

Both the Creedmoor and the .308 are extremely accurate. Both are low-recoiling, “mild” rounds. Both are fine as wine in the summertime for hunting. Both are hugely popular. Is one better than the other? Let us compare.

The .308 Winchester (or 7.62×51 NATO) was developed to replace the longer, bulkier .30/06. It’s one of the most successful military rifle cartridges of all time.

The .308 will shoot about as accurately as anything you can buy. It remains one of the rounds of choice in military-style competition, and in F-Class Tactical Rifle.

But it is hunters who likely account for the .308′s perpetual popularity. It was a hit from the first. There is .308 hunting ammo in such profusion and prolixity that just thinking about it gives you a nosebleed. You can shoot prairie dogs with a .308 (although it spoils a lot of meat), and African ivory poachers used to kill elephants with FN-FAL rifles loaded with 7.62 military ammo.

Traditionally, the most popular competition bullet weight has been 168 grains, but I doubt that’s the case any longer. The new slug is either the 175-grain Sierra Matchking Boattail Hollow Point or the 175-grain Berger VLD Target. The 168s develop 2,650; the 175s in the real world about 2,550.

This reflects what cerebral trigger-pullers have known for some time: that the way to go for more range is through heavier bullets and higher ballistic coefficients, not more velocity.

Hornady’s rationale behind designing the 6.5 Creedmoor was that there are far fewer target shooters than hunters, but that target shooters burn up far more ammo, so he who comes up with a truly superior target cartridge will need a truck to cart his profits to the bank.

And that is what Hornady did. They wanted a round that had very little recoil, fired bullets of very high BC, was cheap and unfussy to reload, did not cost a fortune, was capable of extreme accuracy, could work through a short rifle action, and offered good barrel life. They got all of it.

How good is the 6.5 Creedmoor at long range? Permit me to quote from the Wikipedia entry on the subject:

“In October 2017, U.S. Special Operations Command tested the performance of the 7.62×51 NATO, .260 Remington, and 6.5 CM cartridges out of SR25, M110A1, and Mk20 sniper rifles. SOCOM determined that the 6.5CM performed the best, doubling hit probability at 1,000 meters (italics mine) increasing effective range by nearly half, reducing wind drift by a third and having less recoil than the 7.62 NATO rounds…”

Like the .308, the 6.5 Creedmoor is loaded in a migraine-inducing variety of ammo. However, its range of bullet weights is more limited, breaking down into two groups. The lighter weights run from 127 grains to 135; the heavier group goes from 140 to 147 grains. If you made a count, you’d probably find that 140 grains is the most popular weight.

The 6.5 Creedmoor is a round of modest velocity. With the lighter-weight bullets you get roughly 2,900 fps; with the heavier ones, 2,700. This is deceptive. The 6.5 Creedmoor, with 140-grain bullets, duplicates the trajectory of the far more powerful .300 Winchester Magnum out to 1,000 yards and beyond.

And so, let’s get to the comparisons.

The less recoil you catch, the better you shoot; it’s as simple as that. A 7-pound 6.5 Creedmoor firing a 140-grain bullet at 2,700 fps imparts just under 15 ft. lbs. of kick. The same weight .308 rifle shooting 165 grains at 2,650 fps turns up 19 ft. lbs. You can go up and down in bullet weights, and the results are going to be parallel between the two cartridges.

They are two of the most accurate rounds in existence. At extreme long range, you could give the edge to the 6.5 Creedmoor.

6.5 Creedmoor vs. 308 in Price, Variety, and Availability of Ammo

On paper, the .308 might get the nod because it can use heavier bullets. In the real world, since there’s hardly any difference in killing power between cartridges, that goes by the boards.

Winner: The .308 by a nose, although it’s close enough that you can consider it a tie for all practical purposes.

Neither cartridge has any tricks of the trade, quirks, peculiarities, or hidden pitfalls. The 6.5 Creedmoor has an advantage in that it will accommodate very long bullets without their intruding into the powder space.

Read Next: 6.5 Creedmoor, The New King of Ammo

Let’s dial back to a sane distance, say, 500 yards, and switch from target bullets to hunting bullets.

So, who wins? It looks like the Creedmoor. But if you take away the target shooting, or the 500- to 1,000-yard element, it’s a tossup. Currently, I own zero rifles chambered in 6.5 Creedmoor. I have six .308s in varying configurations and am not about to swap them for Creedmoors. Over the years I’ve probably owned 10 .308s, and when I wore a green suit and got free ammo provided by the Government (not to mention $85 per month), I carried a 7.62 NATO.

Does this mean I’m prejudiced? Yep. The 6.5 Creedmoor is every bit as good as they say it is, but I’ve had 50-plus years of shooting with the .308, and it’s never failed to get the job—any kind of job—done.

But my eyes are fixed on the past, and yours, presumably, are on the future, so you decide. Or buy one of each.