The .270 Winchester vs. the 7mm Remington Magnum

Both the .270 and 7mm mag. are great cartridges, but which one is better? 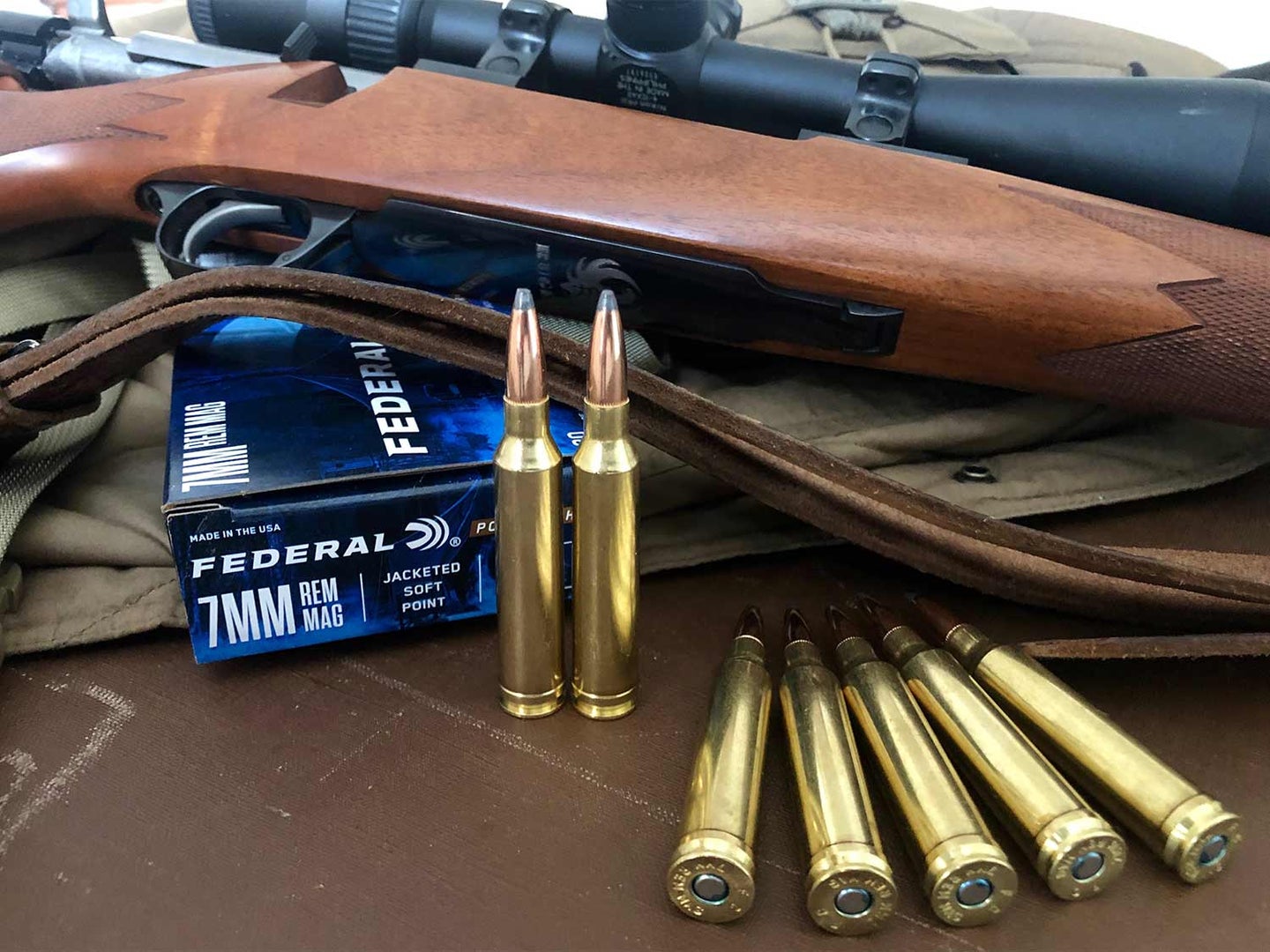 The 7mm Mag needs at least a 24-inch barrel to maintain its advantage in velocity. Matthew Every
SHARE

Comparing the .270 with the 7mm Remington magnum is like comparing grits and white cornmeal. They’re pretty much the same thing. The latter round is a tad more powerful; so little, though, that any advantage to it lies in the fevered imagination of the user. Both are excellent cartridges. Both have been popular from their inceptions. Both are very close on cartridge best-seller lists, usually lurking around the No. 5 and 7 slots. The real difference, if there is such a thing, is that the 7mm Rem Mag is not truly a magnum, and that the .270, which makes no pretenses at magnumhood, may well be.

The History of the .270 Winchester

The .270 was developed by Winchester in 1923 and came out in 1925 in the Model 54 bolt-action, predecessor to the Model 70. The cartridge had just enough bullet weight to take on any North American big game except the big bears. It had enough velocity to make hitting easy at what was then considered long range. There was a 130-grain load that did around 3,000 fps, and a 150-grain bullet that made 2,900 with a strong following wind.

And it had very little recoil. People could shoot it accurately because they weren’t afraid of it, and since accurate shooting is 98 percent of cartridge effectiveness, the .270 Wincheser acquired a reputation as a dispenser of Sudden Death.

The History of the 7mm Remington Magnum

The 7mm Remington Magnum debuted in 1962, chambered in the brand-new Model 700 rifle. The cartridge was loaded with 150-grain bullets at 3050 fps and 175-grain slugs at 2850. (These are real-world figures from my own chronographing.) The round was a major, and immediate, success.

One of the factors that drove the 7mm Remington Mag was undoubtedly the excellence of the Model 700. Those rifles would shoot. In fact, the first sub-MOA group I ever saw from a big-game rifle was shot by a gun writer named Bob Zwirz with a 700 in 7 mag. He put five screw-machine 160-grain Nosler Partitions in 5/8 of an inch. The rest of the load was CCI 250 primers and 68 grains of the old Hodgdon 4831 powder. (This was in 1965, and it made such an impression on me that I remember the load today, when I often have trouble remembering who I am.) Zwirz cut out the group and kept it in his wallet. When he showed it to people they became hushed, and a few wept openly.

Another factor that helped the 7mm Rem Mag was the fact that in 1962, hardly anyone had a chronograph, and if you did, using it was a major pain. People who bought the 7 mag beheld the fat case and the word “magnum” on the box and assumed that they had the Real Deal. After all, it kicked more and made more noise than a .270, and so it filled them with confidence, and because they were filled with confidence, they shot it well, and its reputation soared.

Herein lies something of a mystery. When the Remington magnum was developed, it was by no means the first such round in .284. There was Warren Page’s very famous, and far more powerful, 7mm Mashburn magnum, and the excellent and hugely underrated 7mm Weatherby, also considerably more powerful. I seem to recall that a gun writer named Les Bowman had something to do with Remington’s effort. Les was a Wyoming gun nut, and outfitter, and I think they sent him an experimental rifle in the new caliber, and he loved it, and so they went with it.

(Les was also stone deaf. He heard less than I do. He owed part of this to shooting and part of it to the fact that he flew open-cockpit mail planes for the Post Office back in the 1920s and 30s, and lost a good chunk of his hearing thereby. I consider this an unfair advantage.)

I freely confess that I’ve had a ton of experience with the .270 and very little with the 7mm Remington Magnum. Checking back through my records, the only one I can find that I owned I bought in 1974, and hunted with it, and thought it was OK and no better, and had it rebarreled to .338. I have, however, shot a lot of others.

Read Next: The 12 Best Cartridges for Elk Hunting

The .270 Winchester vs. 7mm Rem Mag: Availablity of Ammo

A tie. Because the two rounds are so popular, everyone loads for them, and there’s a whopping choice of bullets. The 7mm Magnum is somewhat more expensive, but the difference won’t break you. As far as bullets by themselves are concerned, the 7mm has a big advantage. The .277 diameter that Winchester thought up a long time ago is something of an odd duck, and has never been used for match shooting. Seven millimeter, however, is one of the most popular sizes, and there’s plenty of 7mm rifles that are used in competition, so there are oodles of target-grade bullets out there, including some that can be used for hunting. The practical range of bullet weights for the .270 runs from 130 to 150, and that’s about it. For the 7mm, it goes from 140 grains to 175 grains, with all sorts of stops in between.

The best weight for the .270 is 150. The best weight for the 7mm Magnum is 160. In a 22-inch barrel, the former can be made to go 2,950 fps. The latter can be driven at the same speed. If you’d like to have an argument about which is better, we can discuss how many angels can dance on the head of a pin when we’re done with that.

The .270 can be made to work very well in a 22-inch barrel, which I consider to be an advantage. The 7mm Rem Mag has to have 24 inches or you lose what little advantage in velocity you have. Some 7mm Rem Mags are given 26-inch barrels, and anyone who is nuts enough to hunt with such an abomination is welcome to do so.

It depends more on the rifle than on the cartridge, but I’d give the edge—a razor-thin one—to the 7, only because you can choose from such a dizzying range of bullets. You’ll eventually find something that shoots super groups. Both rounds, it should be noted, have reputations for fine accuracy.

Using the 150-grain bullet as a model, in a 7-pound rifle, the .270 Winchester produces about 13 foot pounds of recoil, which is not much. Using the 160-grain bullet, an 8 pound 7mm Rem Mag churns up around 20. (I calculated on four different systems, and the results varied; these are the averages.) This is not a ton of difference. But the thing is, a 7-pound .270 is perfectly shootable, but a 7-pound 7mm Rem Mag will not make you a happy camper. Considerable edge to the .270.

The .270 Winchester vs. 7mm Rem Mag: Effectiveness on Game

There’s no difference. You could shoot both of them until the gun goes supernova and not see one.

The .270 Winchester vs. 7mm Rem Mag: Effectiveness at Long Range

You have to go with the 7mm Remington Mag because of the bullets that are available, and a highly streamlined 175-grain slug will pretty badly outrange anything the .270 can muster.

It’s very hard to give a solid figure because there are so many variables involved, but using chrome-moly barrels for both cartridges, I’d say 2,500 rounds will pretty well shoot out a 7mm Remington Mag, and 3,000 will do it for a .270.

The .270 Winchester vs. 7mm Rem Mag: Ease of Handloading

Both cartridges are models of deportment. Neither presents any special problems.

And The Winner Is…

Long, long ago, I cast my vote for the .270 and have never looked back. When I wanted a 7mm magnum, I went for the 7mm Weatherby, which packs a lot more horsepower than the Remington.