What’s New in Crappie Gear and Baits for This Season

It’s not too early to think about fishing. Here’s the latest tackle to help you load up on slabs 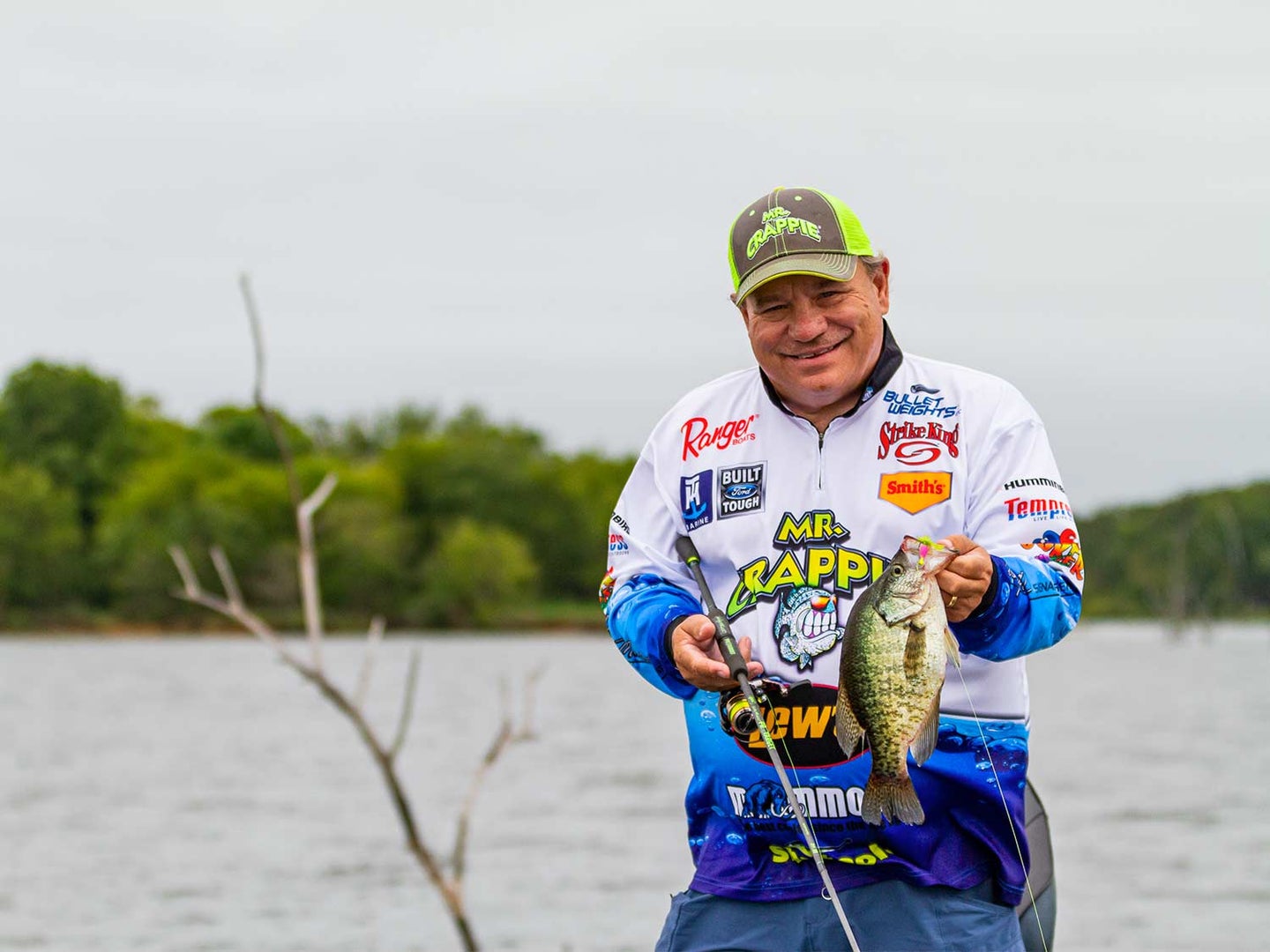 We rounded up the most eye-catching tackle and gear at the Crappie Expo that we’re certain will help you load up on slabs this coming season. Some of the products are available now, but for the most part the goodies will show up next spring in online sales or in tackle stores that specialize in crappie gear:

Lew’s has been a major player in the bass-fishing world, but it’s also caught on among the crappie crowd. Its new Wally Marshall Pro Target Series is the latest in an extensive line of crappie poles designed for specific techniques. Models include rods for jig-casting, shooting, vertical jigging and target jigging. In the long and the short of it, rod lengths run from 6 ½ feet to 16 feet for the longest target-jigging model. The blanks are constructed of IM8 graphite and have EVA butts with graphite reel seats and metal hoods. ($80 to $130; lews.com)

Keep your drinks cold or your minnows kicking with the Mr. Crappie Live Bait Bucket from Mammoth Coolers The round 11-quart bucket is rated to hold up to 5 dozen minnows and a wire basket on one side can cradle a battery-powered aerator. A heavy-duty swiveling handle makes it easy to remove the bucket from a boat, and when it’s time to make a run down the lake, batten down the lid with a rubber tether strap. A drain plug at the bottom simplifies cleaning or refilling the fully insulated bucket for another round of fishing. ($90; mammothcoolers.com.)

Redneck Rubber makes all sorts of soft-plastics, but the company is equally famous for the quality of its jigheads. Made for the guys using braided line and heavier rods who are after suspended slabs, the jigheads are available in a variety of colors and 1/16-, 1/8- or ¼-ounce weights. Each sports a 1/0 premium heavy wire Mustad hook and a UV clearcoat finish impervious to the hard knocks inherent with crappie habitat. (Three to a package, they retail for about $4.25; redneckrubberco.com)

From the everything-old-is-new-again department at Charlie Brewer’s Slider Company comes a facsimile edition of the original spinning rod the founder used in the formative stages of finesse fishing. The Tennessee native, general acknowledged as “the father of finesse fishing,” started his company 50 years ago and the 4-foot, 9-inch rod commemorates that anniversary. The fiberglass rod is stiffer than most of the finesse versions being manufactured nowadays. It has a cork handle as well as three wire line guides and a tip guide and bears the commemorative stamp. According to Brewer’s daughter, Caroline Brewer Calton, once the limited-edition rods are gone, a standard version will be available in the future. ($45; sliderfishing.com)

Read Next: How to Fish for Crappies Using Live-Scoping Sonar

A fish fry was held during Crappie Expo last fall and it drew 3,800 hungry patrons. The fish they enjoyed were cooked on a dozen R&V Works Cajun Fryers (), which have never met a fish or turkey they couldn’t handle. The company offers a range of propane gas fryers, including carbon steel or stainless steel and aluminum models for coastal cooking near salt water. The 4-gallon size is the company’s most popular seller because it’s just the right size for backyard picnics, though it really isn’t recommended for frying turkeys. For that, go to the 6-gallon size or larger. (450; bbqguys.com)

As is true of a lot of other lures in the fishing marketplace, the Baby Kamikaze Swimon is a crossover from the bass-fishing world. The Kamikaze Swimon’s popularity among bass anglers as a 4 ¼-inch trailer for vibrating jigs fostered a demand among crappie fishermen for a downsized version to troll or bounce off the bottom. Big Bite Baits responded with a 2 ½-inch model that’s available in 20 colors now, with more to come. Like big brother, the smaller Baby Kamikaze Swimon has a ribbed body and split tail. ($2-$3 for package of eight; bigbitebaits.com)

Specialized tools for specialized fishing challenges is the name of the game in crappie tournaments, much as is the case in bass events. A number of boat companies such as Tracker and Xpress have been producing popular crappie boats for a number of years, and Vexus has joined the lineup with its AVX189 Crappie model. A tad over 18 ½ feet in length, the aluminum boat sports offers such crappie-friendly features as a 10-foot-long rod box, aerated bait/fish wells fore and aft, and plenty of room to mount electronics and spider rigs. Rated for 115 horsepower. ($32,000; vexus.com)

Whoever figured out that electric knives were perfect for filleting fish was a genius. The latest testimonial to that can be seen in the Mr. Crappie Slab-O-Matic. It’s available in a kit that contains two stainless steel blades (7-inch and 4 ½-inch sizes) with matching plastic sheaths, a cut-resistant XL glove and a mesh carrying bag. The knife’s unique design accommodates good air flow that will keep the unit from overheating during those long sessions of fish cleaning you hope you have. Plug it in and make short work of that limit. ($41)

The venerable Puddle Jumpercelebrates its 50th anniversary beginning in January, and the Arkansas company observes the occasion with a major expansion of bait choices. The line has been increased to include new body styles such as a Baby Pro Curly Shad (2.4 inches), Puddle Jumper Baby Pro Shad (also 2.4 inches) and a few 2-inch baits such as the Puddle Jumper Glider, hand-dipped Tube and a Split-Tail Minnow. Matching powder-coated jigheads with 3D eyes can be purchased with or without the trademark belly spinner. Prices range from $2.99 to $4.99 per package, depending on style and quantity. ($5; puddlejumperlures.com)

If you can remember to push The Button every time you catch a keeper-size crappie, you’ll be less likely to run afoul of a tournament director or the law. The handy device) lets you keep up with all the fish you’ve got splashing around in your livewell without having to get them all out at some point and count them one by one. Just enter the preset limit you’re going for and The Button will vibrate when it hits the mark. It operates on three AAA alkaline batteries and also can be used to count multiple limits. It’s waterproof and floats. ($30; madfishern.com)

When crappie are tucked away in those dark places under a dock, it might be time to tie on a BrushPile Jig. The UV-enhanced and GLOW-enfused color finishes stand out in any light, and the enticing wiggles of the solid-bodied tails might finish the deal with a slab. The newest member of the family is a 2-inch Little Diver in six styles and a rainbow of color combinations – 36 to be exact. ($3.50; brushpilejig.com)

Read Next: 14 of the Biggest Crappies of All Time

Crappie like the bait beads that anglers often add to their jig hooks, but they have their drawbacks. For one thing, the little rascals are tiny and hard to hold, especially when you’re in a hurry. They also tend to spill out of the jar and onto your boat carpet where they eventually get squished into the fabric. The EZ Drift Crappie Nibbles Bait Pen offers a solution in the form of a small pen-like device that makes it a snap to bait up. A Kentucky entrepreneur named Steve Abernathy developed the pen, which works on the same principle as a muzzleloader capper. Unscrew the end of the pen, load it up before you go fishing and putting beads on your hook instead of the deck won’t be a problem. The pen is available in pink, yellow or black. ($20; ezdrifttrollingsystems.com)

The folks at Mossback Fish Habitat might be considered the Lego builders of the fishing world. Knowing that crappie and other species prefer to stake out brushpiles and other cover, the Arkansas company has developed a series of artificial fish attractors to do the job. The Mossback reefs never decay and are made of recycled PVC pipe with olive-drab and black coatings that won’t harm fish or their environment. Anchor a Mossback on the bottom or suspend some under docks and get ready for a bite. ($50 to $900)

The Plano 3607 box contains 190 pieces of tackle, including the Texas company’s Stump Bug, Brush Glider, Slim Stix (2 3/8- and 3-inch) and Minnow in 11 different colors. Sixteen baits of each configuration are in the box, except for the 3-inch Slim Stix, which numbers 12. Additionally, there are 10 each of the BX jig hooks in 1/8- and 1/16-ounce weights. ($40; boneheadtackle.com)

The secret ingredient in Crappie Magnet Slab Bites from BrushPile Fishing is a proprietary blend of scents made from the minnows that crappie prefer. The new formula also yields a tougher bait that stays on the hook longer. It isn’t tacky, either, and won’t stick to a boat’s carpeted deck. Three colors – chartreuse, white and silver glitter – are in the color lineup. (A bottle of Slab Bites costs about $3; brushpilefishing.com)

Fish Sauce is putting its own brand on a line of soft-plastics infused with the company’s popular bait attractant. A package of 20 Neds available in various colors retails for $3.50. Also new from Fish Sauce: a special dock-shooting jighead with flattened lead weight in the shank. The shape causes the soft-plastic to fall slower and also adds a subtle wobble to the bait as it heads toward crappie haven. ($3.50 for Neds; $4 for jigheads; jbsfishsauce.com)