How to Choose the Right Broadhead for Deer Hunting

Pick a mechanical, fixed-blade, or hybrid head based on your own shooting tendencies 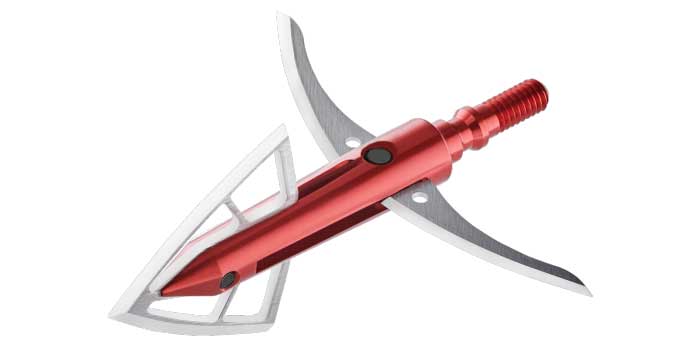 A hybrid , like this Bloodsport GraveDigger Extreme, has you covered whether you hit too far forward or back. Bloodsport Archery
SHARE

Let me get this out of the way right off the bat: This isn’t a point-by-point comparison of fixed-blade versus mechanical broadheads. We’ve done that already. Back in 2014, we conducted a broadhead accuracy test and reported on a deer-recovery study, which you can read all about here. What is worth pointing out, however, is that those findings were surprising.

If you asked hunters which type of broadhead results in more lost deer, I think it’s safe to say that a majority would answer mechanicals, and would cite deployment and penetration problems as the reason. And yet, the deer-recovery study revealed an 82 percent recovery rate for fixed-blades compared to 89 percent for mechanicals.

In other words, assuming that a mechanical head will result in more lost deer is probably not a legitimate reason to shoot fixed-blades, and the idea of choosing mechanicals for better accuracy—particularly if you limit your shots to 40 yards or less like many archers do—doesn’t really hold water, either.

So, what is a good reason to choose one type of head over another? I think it’s less about the head and more about the shooter. Like the gun guys say: It all about shot placement, though this puts a little twist on it. If you hit a deer in the perfect spot, you could kill it with a field point. (Don’t shoot deer with field points.) But, let’s face it, we don’t always hit them in the perfect spot. And that’s when your broadhead choice matters most.

If you hit a deer too far forward, in the front shoulder, you want a tough fixed-blade, cut-on-contact or chisel-tip head that’s optimized for penetration, because it’ll need to punch through heavy muscle and probably bone to get to the vitals. On the other hand, if you hit it too far back, toward the paunch, penetration isn’t an issue. Just about any broadhead will zip through that soft tissue. What you need in this case is to make as big a hole as possible—and you want a really good blood trail, because the deer is not going to die right away. For that, a mechanical head with a large cutting diameter makes more sense. Same goes for a high shot, which is common for treestand hunters who don’t bend enough at the waist, and generally whenever the deer in question reacts to the shot. A high hit is notorious for producing a light blood trail, and while you won’t necessarily fix that with a wide-cutting mechanical, you’ll likely maximize the blood you do have to follow in order to find your deer.

Now here’s the crux of the matter: In talking to fellow bowhunters for years, I’ve found that when individual archers miss the perfect spot on a deer, many of them miss consistently one way or another. I know I do. When my shot is a little off, it is always too far back—and sometimes a little high. In 20-plus years of bowhunting, I can’t recall ever hitting a deer too far forward. (Subconsciously, I think I must be terrified of that front shoulder, because even on my best shots I have to try—really hard—to aim tight to the shoulder, and I still hit a few inches back.) I’d always been a little leery of mechanical heads, but with my shooting tendencies, it just made sense to switch to them, which I did years ago, and I absolutely believe that I’ve recovered more deer as a result.

On the other hand, if your miss tends to be too far forward, go with a tough fixed head and put it on a heavy, micro-diameter arrow. I’ve seen this combo blow right through a buck’s scapula and well into the vitals. That doesn’t mean you want to take that shot on purpose, but optimizing for penetration like this could save your bacon if you pull the shot a little.

What if your misses aren’t consistent? Well, there’s a good way to hedge your bets for any off-the-mark hit, and that’s with a hybrid head, which combines two cut-on-contact or chisel-tip fixed blades with two wide-cutting mechanical blades. It’s billed as a best-of-both-worlds scenario, and there’s something to that. The two fixed blades eliminate any concerns about failed deployment, and the two wide-cutting mechanical blades help ensure big holes and better blood trails. I’ve used both the Bloodsport GraveDigger and Rage X-Treme 4 Blade with good results, and more and more of these heads are hitting the market. With my shooting tendencies, I still prefer a compact mechanical head with a large cutting diameter, but the advantages of a hybrid head are obvious, and I know a couple hardcore archers who shoot a lot of deer that swear by them.

Now, if you’re misses are just all over the place, there’s only one solution: Change out your broadheads for field points and go hit the practice range for a while.