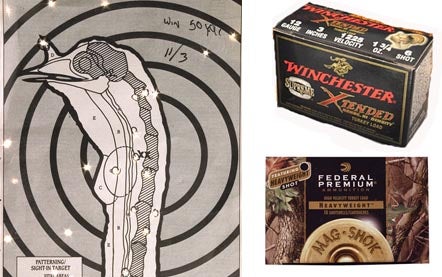 Two new turkey loads-Federal’s Heavyweight and Winchester’s Xtended Range Hi-Density-promise to make the woods a dangerous place for gobblers this spring. The alloy pellets in this new ammo contain tungsten, a hard, dense metal that has proved very effective in specialized waterfowl ammunition such as Hevi-Shot.

Late last year, Winchester and Federal sent me a few of the preproduction turkey loads to test. I ran out to the range to see if these shells are worth shelling out for. In terms of sheer bone-piercing power, the answer is a resounding yes. Whereas lead spatters against the steel frame of my target stand and merely chips the paint, the tungsten alloy gouges little divots out of the metal. You have to believe any pellet that dents steel will leave a lasting impression on a turkey’s skull.

However, the patterns I shot in an abbreviated one gun, one choke test didn’t convince me that you can simply load any shotgun with these new shells and make clean kills at 50 yards. My testing did reveal that to make the most of these new pellet materials, we’re going to have to change the way we think about shot sizes for turkeys. More on that in a minute.

**Winchester Xtended Range Hi-Density **
Winchester’s new product combines tungsten, iron, copper, and tin to form an alloy with 10 percent greater density than lead. The pellets are round, uniform, and hard. Although Winchester says that they’re softer than Hevi-Shot, they’re still quite hard and only suitable for use in guns approved for steel. As they are denser than lead, there are slightly fewer Xtended Range pellets per ounce than there are lead ones of a given shot size. But greater density means that a size 6 Xtended Range pellet hits with the same energy as a lead 5. Initial offerings will include 23/4-, 3-, and 31/2-inch loads in 5 and 6 shot with 11/2-ounce, 13/4-ounce, and 2-ounce payloads respectively.

Federal Heavyweight
Federal’s Heavyweight pellets, a tungsten alloy, weigh a hefty 15.2 grams per cubic centimeter, compared with lead’s 11.2 and Hevi-Shot’s and Xtended Range’s 12.1. That extra density translates into terrific downrange energy; at 40 yards, Federal calculates that No. 6 Heavyweight carries the energy of No. 4 lead. Heavyweight is so much denser than lead shot that it contains about 25 percent fewer pellets per ounce of a given size.

Like Xtended Range ammo, these new pellets can only be fired in guns that are safe for steel loads. Federal will offer Heavyweight in 3-inch, 15/8-ounce and 31/2-inch, 17/8-ounce loads of 5 and 6 shot.

Range Testing
My paper turkey-head targets, which I placed at 40 and 50 yards, indicated that both loads perform about as well as premium lead with similar pellet counts. Winchester’s 13/4-ounce loads of 5s patterned well enough out of a Mossberg 835 with a factory X-Factor choke to kill turkeys at 40-plus-yards. Patterns from the Federal Heavyweight 15/8-ounce loads of 5 shot turned sparse outside 40 yards, but I had expected that, as they contained only about 200 pellets, roughly the same count as 11/2 ounces of lead 4s.

Given how hard these new pellets hit, you won’t have to use the same shot sizes as you do with lead. By going to smaller shot, you’ll still get adequate energy for clean kills but with higher pellet counts for better patterns.

Both of these new loads will cost about the same as Hevi-Shot, prompting a question: Do we really have to pay $2 a shell in order to kill turkeys? Of course not. The current generation of lead loads is deadly; the best 31/2-inch and even 3-inch lead will kill turkeys to 45 yards and beyond if you can shoot them straight and deal with the elephant-gun recoil. This new ammo, as good as it is, hasn’t rendered lead loads obsolete. Yet.