From gimmicky automatic knives to war tools to iconic hunting blades, these vintage ads are a fun trip down memory lane 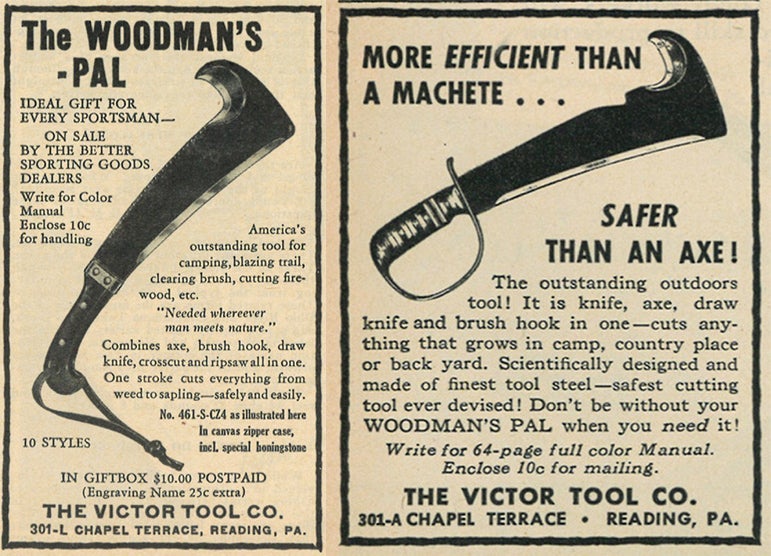 Typically when we publish a new F&S Classic, we select an adventure story or conservation report or how-to column from the archives. This week, we’re doing something different. What follows is a gallery of vintage knife ads that ran in the pages of Field & Stream from the 1940s through the 1960s.

In the world of knives, a lot has changed since these ads ran. Modern knives feature synthetic materials and new blade designs. But there are plenty of classics that haven’t changed a bit over the decades—and why should they? They were perfect then, and they’re perfect today.

For those who think hollow-handle survival knives debuted in the 1970s (and have lingered in the discount section of survival catalogues and websites ever since), here’s an ad from 1945 for a hunting and fishing knife from Rebel Forge of Hartford with a bottle opener on the hilt and a dry compartment in the handle for matches, iodine, flies, gun-swabs and other stuff. Like many hollow-handled knives of today, it even had a compass in the pommel cap. Hopefully it worked better than the air bubble-filled ones you get now.

A double-duty folder with a saw blade, this knife from United Machine Tool Co. was marketed as an all-purpose pocket knife, an ideal Christmas present, and, like many products in the early to mid-1940s, was touted as a tool favored by the military. In this case, the ad claims 60,000 of these knives were included in Air Force survival kits.

This Ka-Bar “Old Timer” trapper’s knife can still be found on auction sites if you look hard enough. Back in the day, this knife was reintroduced to the public—like many knives and other gear were toward the end of WWII—after they had been unavailable to regular consumers with stocks having been sent to Armed Forces overseas. This folder features a clip blade and long curved spey blade, common to trapper knives. This ad doesn’t list a price, but I bet it was significantly less than the ones that go for auction today.

The three knives featured in this ad from Western States Cutlery are quite handsome—with classic handle and pommel designs and clip blade knives in two sizes, along with a sturdy-looking drop point knife with a serious blood groove. This knife company was pressed into military production soon after the Pearl Harbor attack and manufactured a broad range of knives for the military with a wide variety of materials (they substituted iron, steel, and even plastic in place of scarce brass during the war) to keep up with demand. Western, had been around since 1896 when it was established as the Platts & Sons Cutlery Company. Western was acquired by Coleman in 1984 and then sold to Camillus Cutlery in 1991, which closed down operations and production of Western and Westmark knives in 2007.

Here’s an ad for a hand-made knife with a scimitar-shaped blade marketed as a fighting knife. Notice the long, curved end on the hilt telling you this knife was made to stab and slash. Randall didn’t put a price on his handcrafted pieces, but he offered a manual for using the knife for 35 cents. As for the Randall Made Knives company, it’s still around and has been since 1937. The company took off during WWII after W.D. “Bo” Randall made a knife for a young sailor. His friends saw it and placed orders—then a reporter got wind of it and wrote a story on him, and the rest is history. As an extra tidbit of knowledge, according to the Randall Made Knives website, their Model 17 “Astro” was designed for and carried by the seven Mercury astronauts on America’s first manned space flights. Astronaut Gordon Cooper did the final design and two of these knives are on display at the Smithsonian.

In just about any knife catalogue you pick up these days you’ll find all kinds of throwing knives—from expensive single throwers to cheap, stamped steel sets of a dozen throwers in bizarrely-shaped nylon sheathes. I guess some things don’t change much, with this ad from 1945 offering a set of three throwing knives in a folding sheath for $8.50 from Knife-Crafters of Philadelphia.

Another trend in survival knives that seemed to catch on in the ’70s—and continues today—is the saw-back, seen here in a leather-handled knife from E.G. Waterman & Co. for $4.95. The blade design is a bit unusual, and the large saw-teeth were no doubt inspired by Air Force extrication knives designed to cut through plane fuselages after a crash. The E.G. Waterman name is still around, produced by Windless Steel Crafts of San Francisco.

These two different designs of the Woodman’s Pal from The Victor Tool Co. would cause any modern knife enthusiast to scream “Gimmick!” in a heart beat—but the fact is, the thing works. David E. Petzal once wrote of this tool: “The Woodsman’s Pal is a machete with a brush hook. The 10 ½-inch blade is tempered soft so it re-sharpens easily, and you can remove chips with little trouble. It can do anything a small machete will do—plus it’s more efficient at clearing brush and you can even dig with it.” Advertisements for the Woodman’s Pal continued to run in Field & Stream into the late 2000s, and you can still purchase the tool today.

These knives from 1955 look more like modern fantasy daggers than hunting knives—or Khyber knives for that matter—complete with the dragon claw clutching an orb for a pommel on the left one. But it may have been worth it for the price of less than two bucks, especially if the Solingen steel blade lives up to the ad copy. The ad on the right depicts a very similar shape, but is marketed as a knife that “reputedly made its appearance in the Slaughter of the Khyber Pass” without the hunting knife plug. Neither knife looks like a traditional Khyber knife, which has a long blade, no hilt and a handle offset to the rear.

Here’s a vintage all-purpose fishing knife from the 1950s. It managed to float by incorporating a cork handle, which makes one wonder how durable they were. Note the odd cutout in the blade.

Here’s a pair of mean-looking fishing knives from the ’50s sold by F.A. Bower Import Co. If you wanted a polished hardwood handle instead of a leather one, it cost a whopping 75 cents extra. The scaler saw-back just makes them look plain nasty—and pretty awesome.

The features on this multi-function folder look familiar to any faithful Victorinox owners, but the full-size spoon and knife make it resemble plenty of modern camping folders, usually referred to as “hobo knives.”

These two classic-looking hunting knives were offered by Marble Arms, a company that has made knives, axes, compasses and other items off and on since 1887, but was and is still primarily a gun sight manufacturer.

Here’s a cool precursor to some popular—though often unreliable—automatic knife designs of today. A friend of mine got a surprise when he opened his spring-assist, blade-in-handle knife and the blade shot a good five feet from the handle and buried itself in the dry wall. If only he could have done it on purpose, and not so close to my head. Anyway, this one doesn’t have a spring, just a thumb slide and might have been a neat little blade for EDC.

This Black Bandit Italian Stiletto is a good ol’ switchblade carried my so many characters in flicks from the ’50s and ’60s. The “mystic” button apparently opens the blade with “supersonic speed.” The sonic boom must have been annoying. All kidding aside, I wish you could still pick up a real switchblade through the mail for six bucks these days.

Buck Knives—what else is there to say about these American icons? This is the hunting knife my father carries, as have many fathers and grandfathers since Hoyt Buck made his first knife in 1902. The three blades pictured here are very similar to models still manufactured by Buck today.

Here’s a great ad from Camillus, which was one of the oldest knife manufacturers in the country making quality blades in Camillus, New York, from 1876 until it filed for bankruptcy in 2007, and the brand name was purchased by Acme United Corporation, which relaunched the brand in 2009. The fixed blade picture here is a civilian version of the Ka-Bar combat knife Camillus made in large numbers for the U.S. Marine Corps during WWII.

This ad for an assortment of Puma knives displays a beautiful blades that has often been imitated. Puma is a truly old knife company. It started in Solingen, Germany, in 1769. The brand has been distributed in the U.S. since 1957 and the company established The Puma Knife Company USA in 2009, bringing their knives to a larger number of retailers throughout the country. And, yes, the White Hunter is still available today—with a hefty price tag.

So, it seems that gimmicky and gaudy Bowie knives have been around at least since the ’60s. According to the ad, this thing is hand-forged, individually engraved, imported, and can’t be found outside of a museum…but it’s also great for hunting and camping at $5.95. Something’s off at that price—even in ’65.