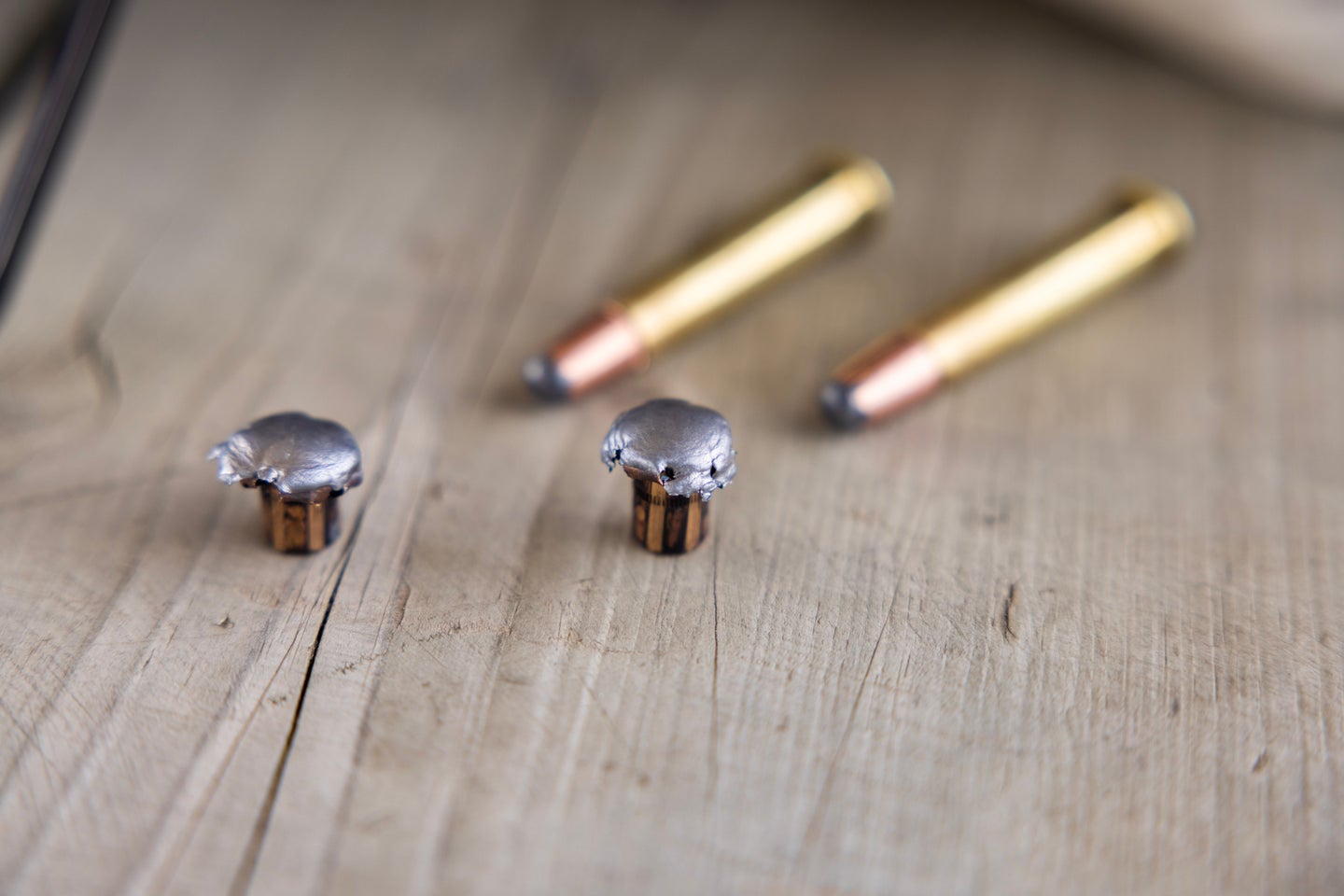 Follow our full coverage of the latest and most talked-about new hunting equipment for 2023, including shotguns, trail cameras, knives,  compound bows, crossbows, broadheads, and more.

If you haven’t heard, Remington Ammunition is back, and this year they’ve got a brand new cartridge on the market. Dubbed the 360 Buckhammer, it’s made for states that require straight-wall rifle cartridges for deer hunting, such as Ohio, Indiana, and Iowa. Two weeks ago, I shot the 360 Buckhammer out of a steel side-gate-loading Henry—one of four Henry rifle models to be chambered for the cartridge—and last week at SHOT Show I learned a little more about it.

What did I find out? Deer in the Midwest should be worried. The 360 Buckhammer has plenty of power, less recoil than many other straight-wall cartridges, and should be easy on your wallet. Here’s a closer look at the 360 Buckhammer.

Remington built the 360 Buckhammer using a blown-out .30-30 Winchester case loaded with either a 180- or 200-grain .358-caliber bullet. They say the closest thing to compare it to is the .30-30, and after shooting the new cartridge, I agree. It cycled smoothly, hit where I aimed, and kicked just like grandpa’s deer rifle. I didn’t have time to put it on paper (we were shooting plastic bottles at 60 yards), but it did everything I’d need it to if I was hunting deer in the woods.

So what if you’re not in the woods and all you have is a 180-yard shot at a buck in a soybean field? Remington says the 360 Buckhammer will, well, hammer that buck. We haven’t had a chance to test this yet (stay tuned), but the 360 Buckhammer is reported to deliver enough energy and accuracy for clean kills out to 200 yards.

The 360 Buckhammer ammo and rifles chambered for it should start hit the shelves this spring, with loads from Remington and Federal and four new rifles from Henry. Remington is loading the cartridge with Core-Lokt 180- and 200-grain bullets, and Federal will load 360 Buckhammer in their Powershok and HammerDown lines. Because the Buckhammer uses common components, like the .358 caliber bullet, more ammo companies will likely soon follow with their own loadings.

If you live in a state that’s concerned with the shape of your deer cartridge, you’ve only got a few options to choose from. There are classics like the .45/70 and .38-55, more recent additions like the .350 Legend and .450 Bushmaster, or handgun cartridges like the .357 and .44 Magnum. The Buckhammer kind of fits in the middle of all of these, which means for a lot of hunters, it should be just right.

When compared to handgun cartridges, the 360 Buckhammer will give you an extra 50 to 100 yards of reach. You’re going to pay for that range with recoil, but only a little—again, think .30-30. Remington says that when compared to its closest competitor, the 350 Legend, The Buckhammer is 300 fps faster out of the gate, will have less drop, and retain more energy at 200 yards. And when put against big bores, like the 450 Bushmaster, the Buckhammer kicks a lot less while offering a flatter trajectory and only 30 ft-lbs less energy at 200 yards.

The 360 Buckhammer Is Made for Lever Guns

For a lot of deer hunters—including me—the 360 Buckhammer’s reliance on a lever-action isn’t a bad thing. Inside of 200 yards, I’d rather hunt with a lever-action than a bolt gun or semi-auto any day. Lever guns are fun, and maybe a new lever-action cartridge will incentivize gun companies to keep making them. (Some already are, like Ruger, with their reintroduction of the Marlin 336 this year.)

Read Next: The Latest Rifle and Shotgun Ammo From the 2023 SHOT Show

With a shooting world that’s obsessed with high-BC bullets or the next best PRC, it’s nice to see Remington come out with a cartridge geared toward those who hunt close. Remington could have pushed the envelope and developed some loud, hard-kicking, fire-breathing, long-range straight-wall cartridge, but they didn’t. Instead, they made a cartridge that should work for just about any deer hunter—and I can’t wait to hunt with it.