How to Catch Giant Muskie Like This Great Lakes State Record 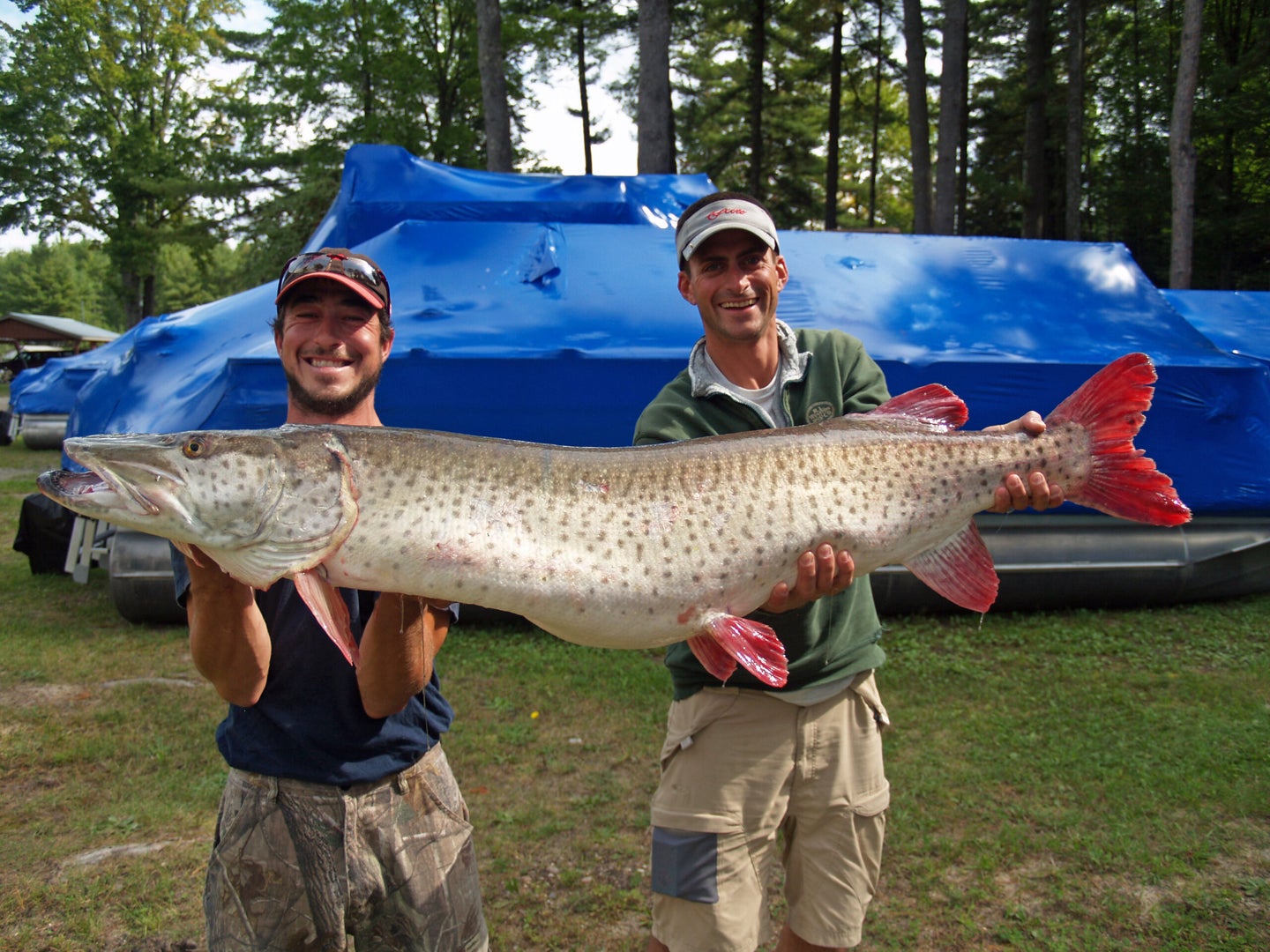 On Sunday, September 27, 2009, Kyle Anderson of Rapid City, MI caught this 50-pound 8-ounce Great Lakes muskie. The fish is now the new Michigan state record. It beat the old record, set in 1984, by 2.5 pounds. Anderson was fishing in Torch Lake, near Traverse City.

Before we dig into the details of Anderson’s record catch, here is a list of lures that can help you catch a giant of your own.

Tackle-shop owner Josh Stevenson (mighty​musky.​com) is one of the best muskie hunters and most sought-after guides in Minnesota. These five muskie lures caught more muskies in 2013 than any others in Stevenson’s arsenal.

“These bucktails probably accounted for half the fish in 2013. The hair is reverse tied, so the lure has incredible flutter. Plus, people of any skill level can use one.”

“I can get a fish to eat this lure when they won’t eat anything else. Of course, I modify mine to make them act exactly the way I want, and those tweaks shall remain secret.”

“You can bomb this lure a mile, and all you have to do is reel it in. I think it catches so many fish because it makes a much deeper plopping sound than similar topwaters.”

“Most creepers are a real pain to tune. This one performs right out of the box, and unlike the majority, I can work it at any speed. I always have at least one in the boat.” ­

“Muskies often follow cranks without hitting on the troll. You end up whipping the rod to impart action. This lure naturally kicks right or left at random. It’s a unique crankbait.” 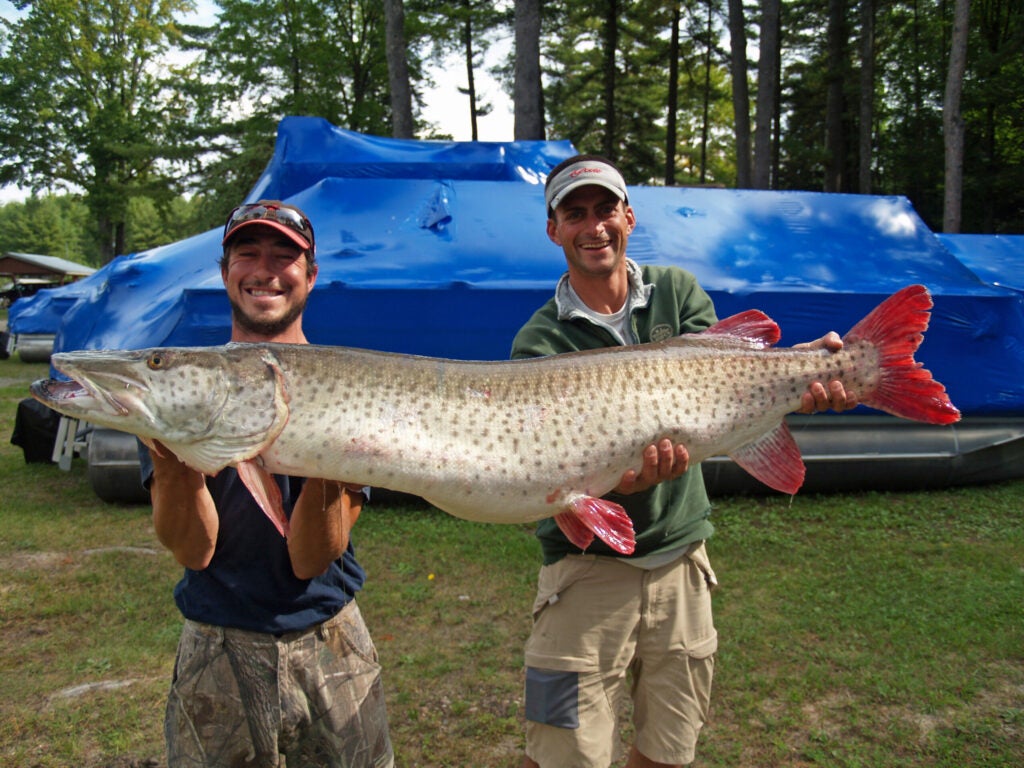 Anderson (left), was unable to balance the massive fish horizontally on his own. His fishing buddy Alex Lafkas helped him hold it up for pictures. “The one day I don’t go fishing with him and he lands this one,” says Lafkas. Anderson, 30, a self-described muskie junkie, was fishing by himself before heading to work. The fish hit at 7:50 a.m. 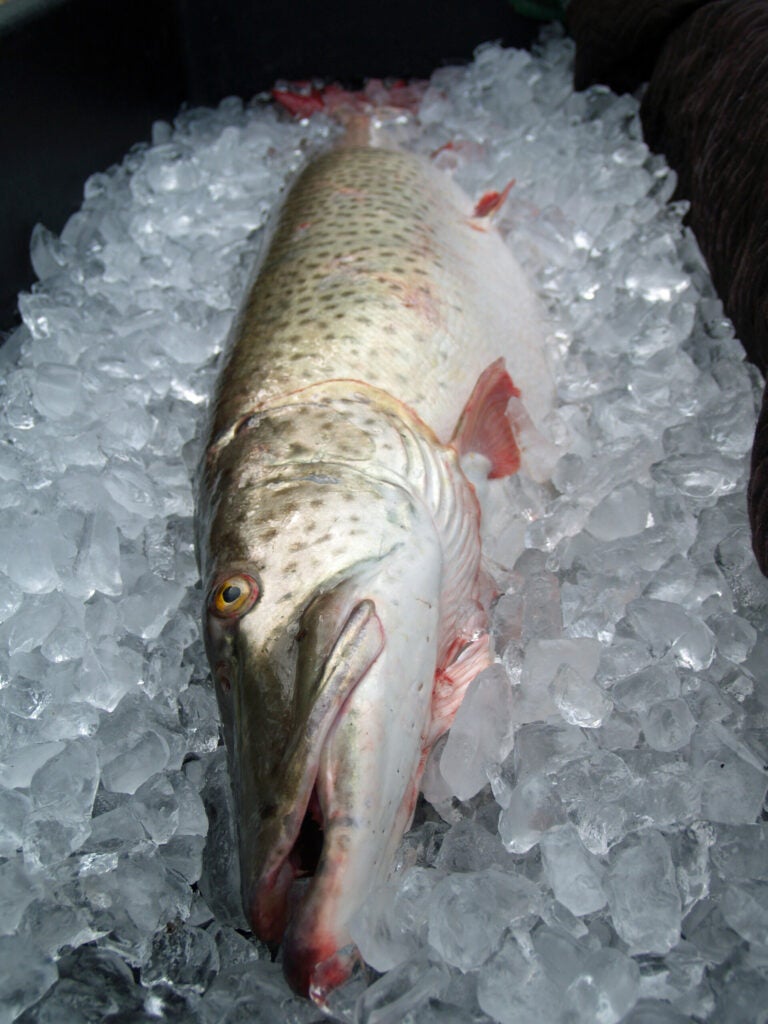 This is the eleventh Great Lakes muskie over 50 inches long.

The fish was 55 inches long. This is the eleventh Great Lakes muskie over 50 inches long (and the 70th of any size) that Anderson has caught. He’s been targeting them for seven years. 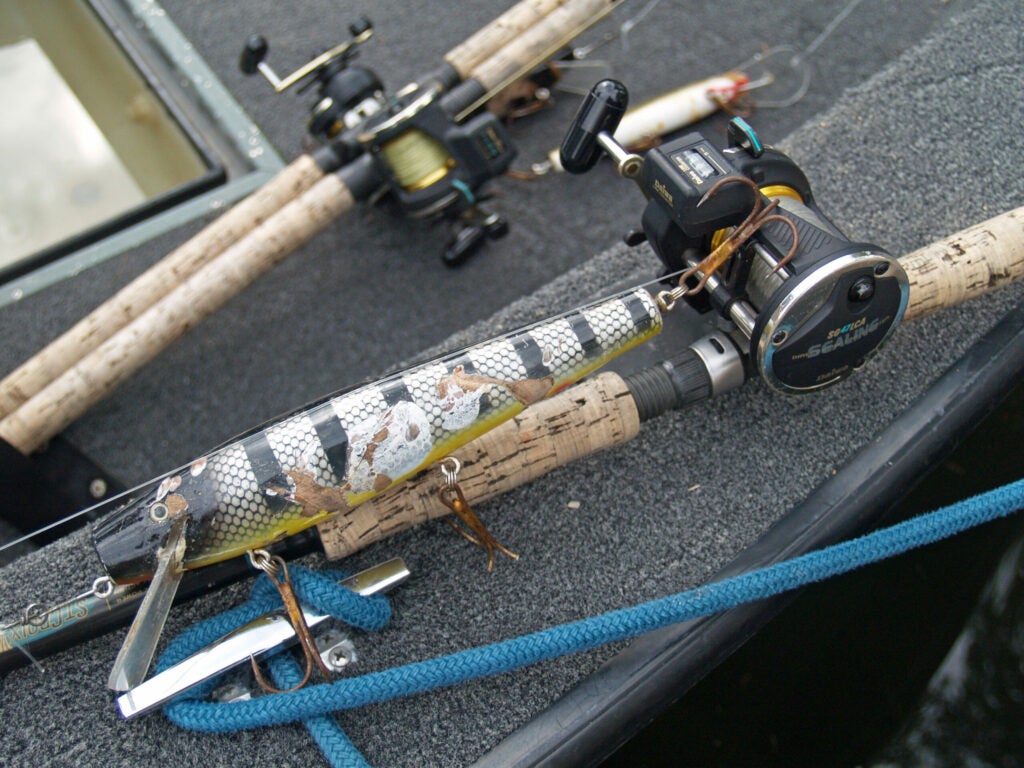 Anderson caught the fish on a 9-inch Muskie Magnet, a custom-built lure he upgraded with Muskie Innovations hooks and Wolverine Triple split rings. The lure was trolled on a 3-foot leader of 100-pound-test Trilene Big Game mono and 50-pound-test Ultragreen Maxima line. The rod was a 6-foot 6-inch medium-heavy St. Croix MODEL. The reel a Daiwa Sg47LCA Sealine.

Pending certification by the IGFA, this fish should also set the 50-pound-test line class world record.

“The fish hit hard. I could hardly get the rod out of the holder,” says Anderson. He was trolling with three rods when the fish ate the lure closest to boat – just 50 feet back from the prop wash. 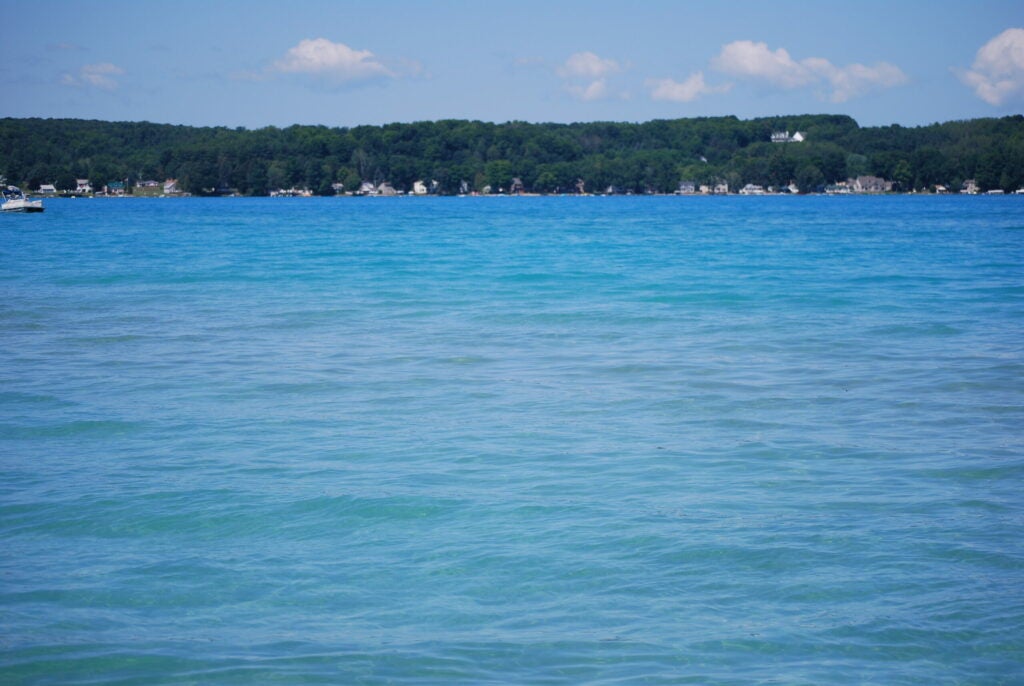 This is Torch Lake.

This is Torch Lake. The natural, 18-mile-long lake was carved by glaciers during the last Ice Age. In places the lake is 300 feet deep.

Check out the fin clip on the front quarter of the dorsal fin. This fish was actually trapped by the Michigan DNR, in partnership with the University of Michigan, during a federally-funded study of large lakes this May. They tagged the fish with an acoustic (radio) transmitter, then released it. 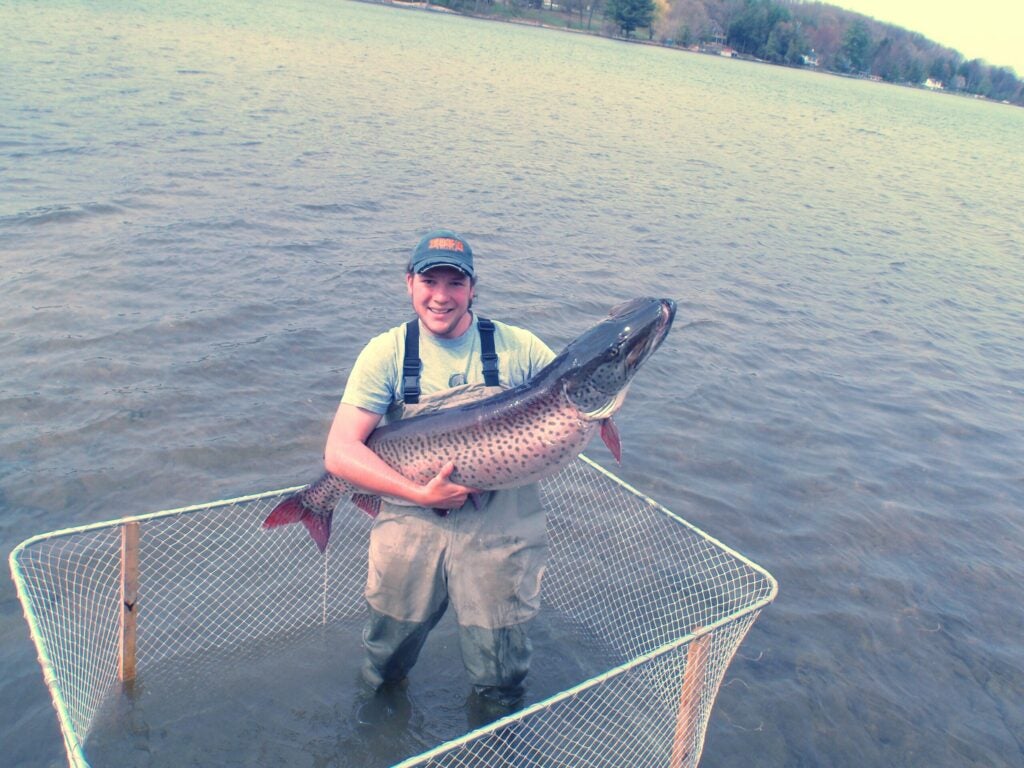 “We estimated it was five pounds heavier then.”

Here’s a photo of the fish, held by University of Michigan student John Molenhouse, in the DNR’s net pen just before the acoustic receiver was implanted. “We gave the fish a rough measurement of 55 inches, the same it was when Kyle caught it. However, we estimated it was five pounds heavier then.”

Anderson attempted to release the fish unharmed, but one of the hooks was lodged in the gills (note the torn gill plate on the fish’s underside.) “Beside her spent eggs, the fish may have lost weight due to blood loss after being hooked, and lost water weight before being weighed,” said DNR biologist Nicholas Popoff. 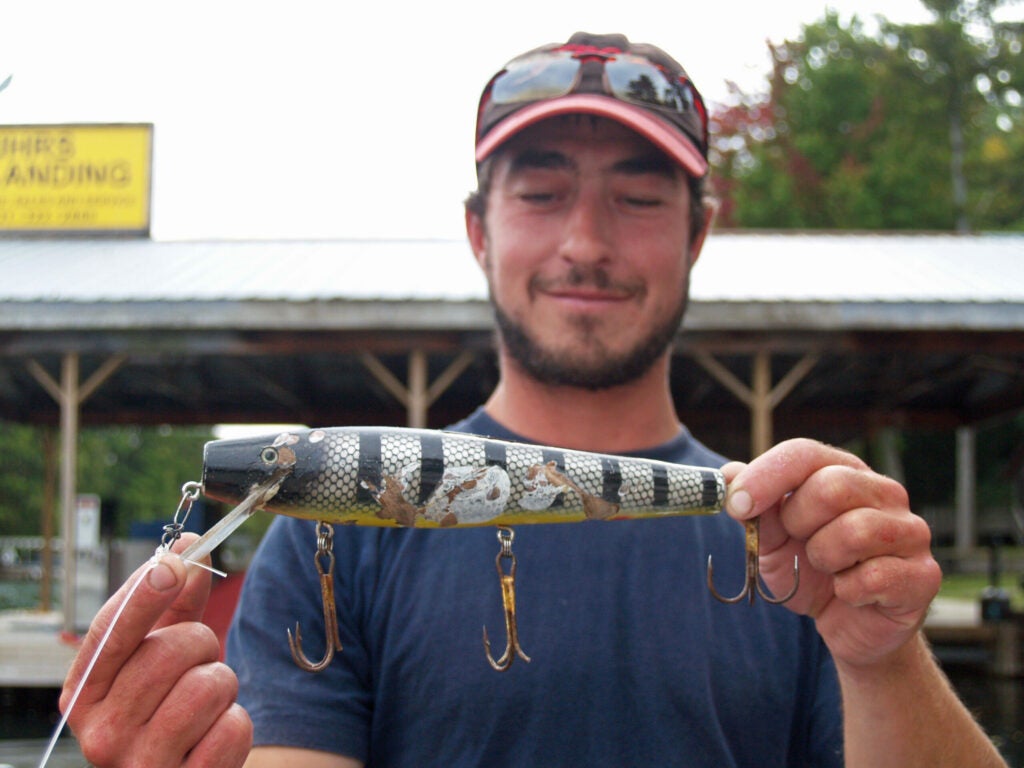 Anderson shows the now damaged hooks of the lure.

Anderson shows the now damaged hooks of the lure. “I clipped the hooks off, trying everything I could to let her go,” he says. It wasn’t until he realized he was not going to achieve a live release that he made phone calls to his buds and then to shore to get the fish weighed. 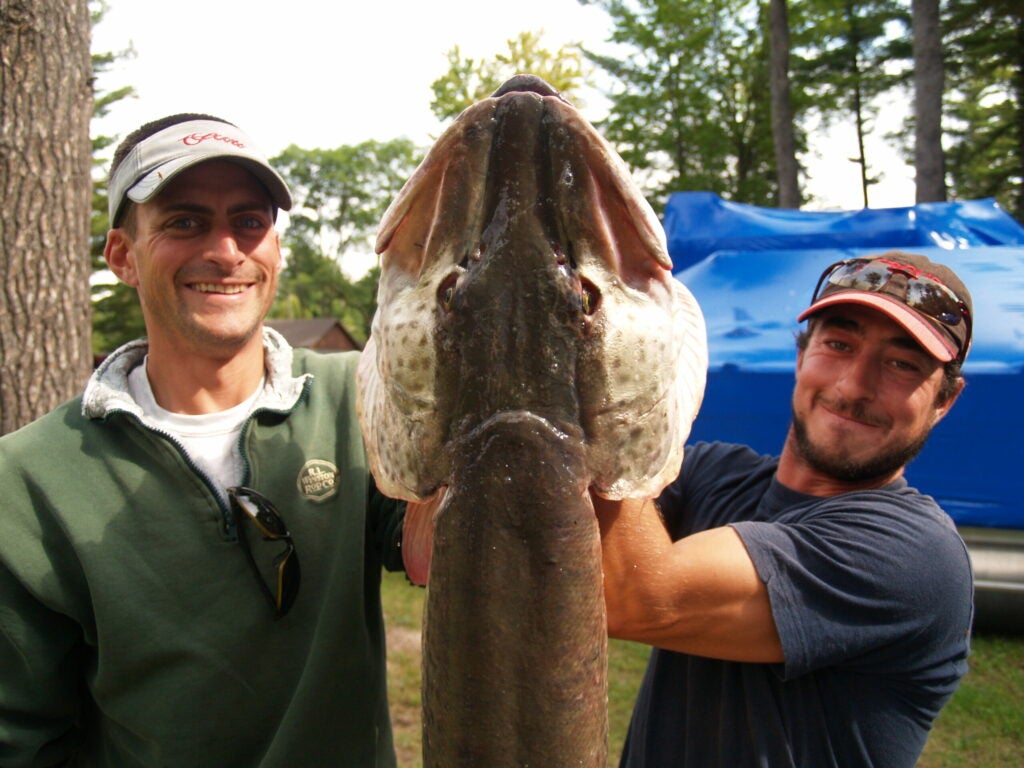 “The fish’s eyes are wider across than both ours put together,” said Lafkas. 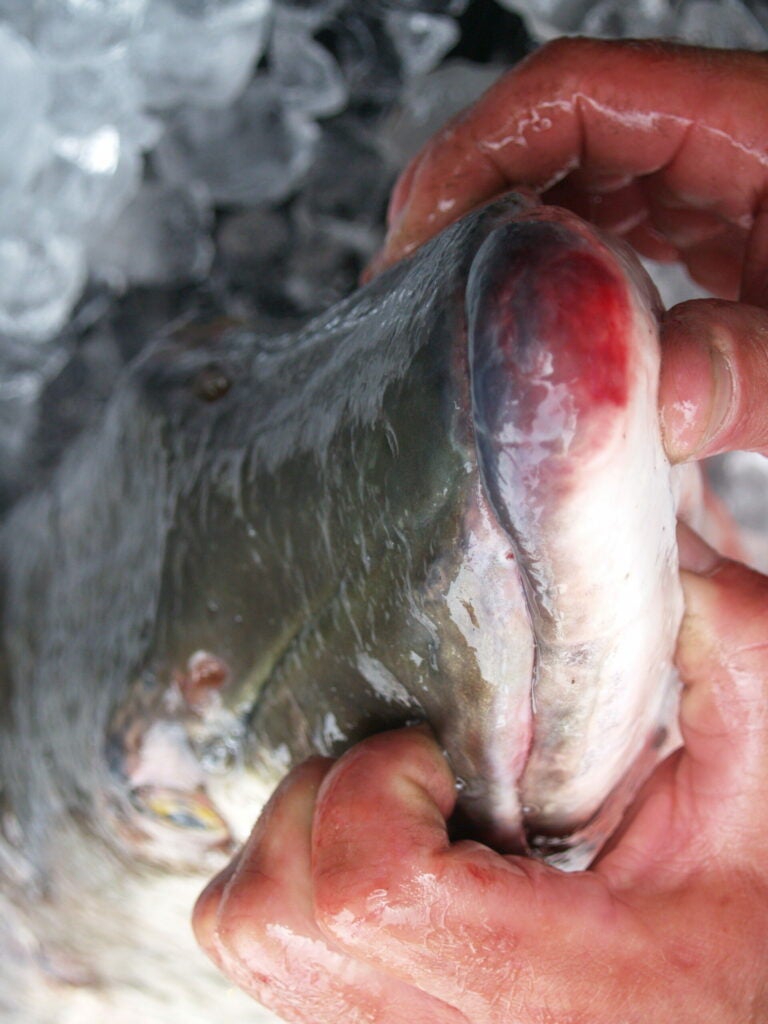 The underbite of a 50-plus-pound muskie.

Many of Torch Lake’s whitefish, suckers, and lake herring succumbed to these teeth. The last state record, a 48-pounder caught by Charles S. Edgecomb in 1984, came from Lake Skegemog, just downstream from Torch Lake on the Elk River. 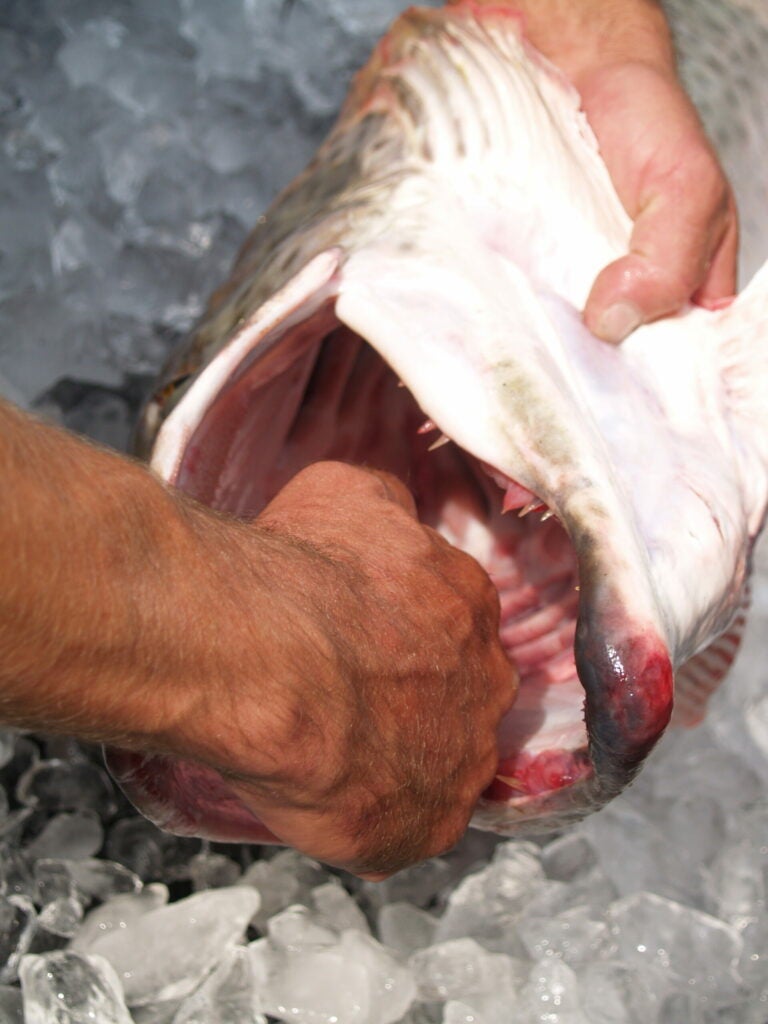 Here the angler’s fist fits with room to spare.

“Forget the ducklings, I wonder just how many full-grown mallards this thing ate,” says Anderson. Here the angler’s fist fits with room to spare.

Anderson’s boat, seen here docked at the morning he caught the fish, was rigged and ready. Anderson doesn’t own a car, just this boat, which he drives to work every day. 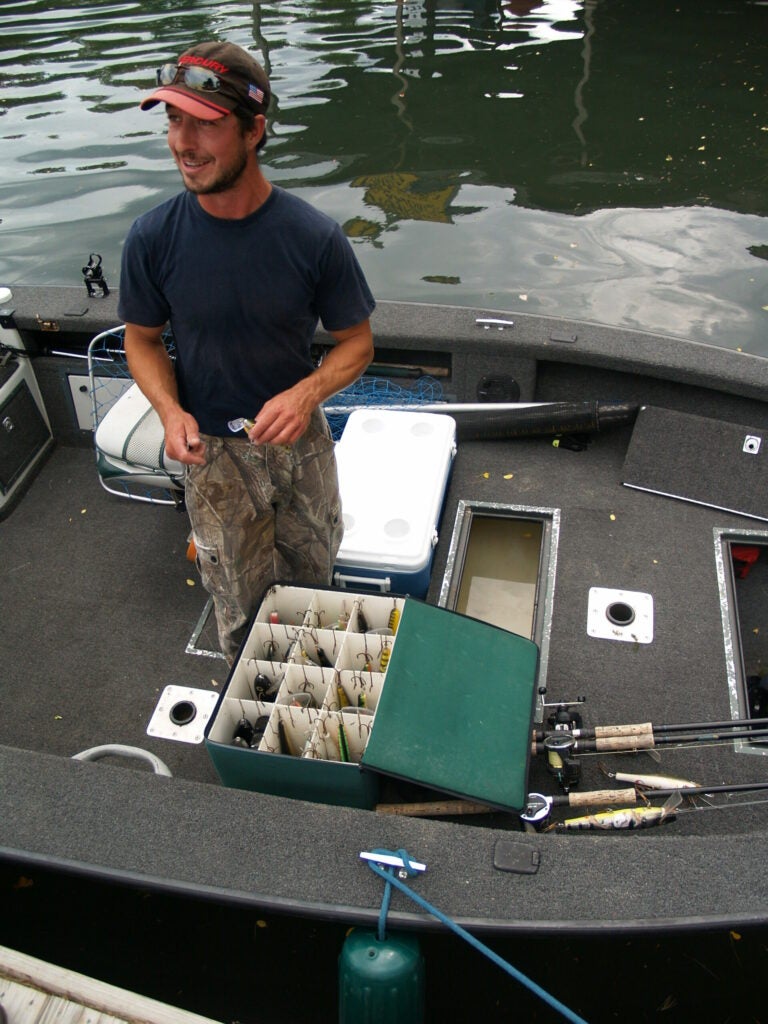 “It doesn’t take a lot of lures to catch muskie, just a lot of time,” says Anderson, standing over his modest box of giant lures. The muskie fanatic fishes nearly every day. Over the past seven years he’s logged 4,500 hours and put 25,000 miles on his boat. 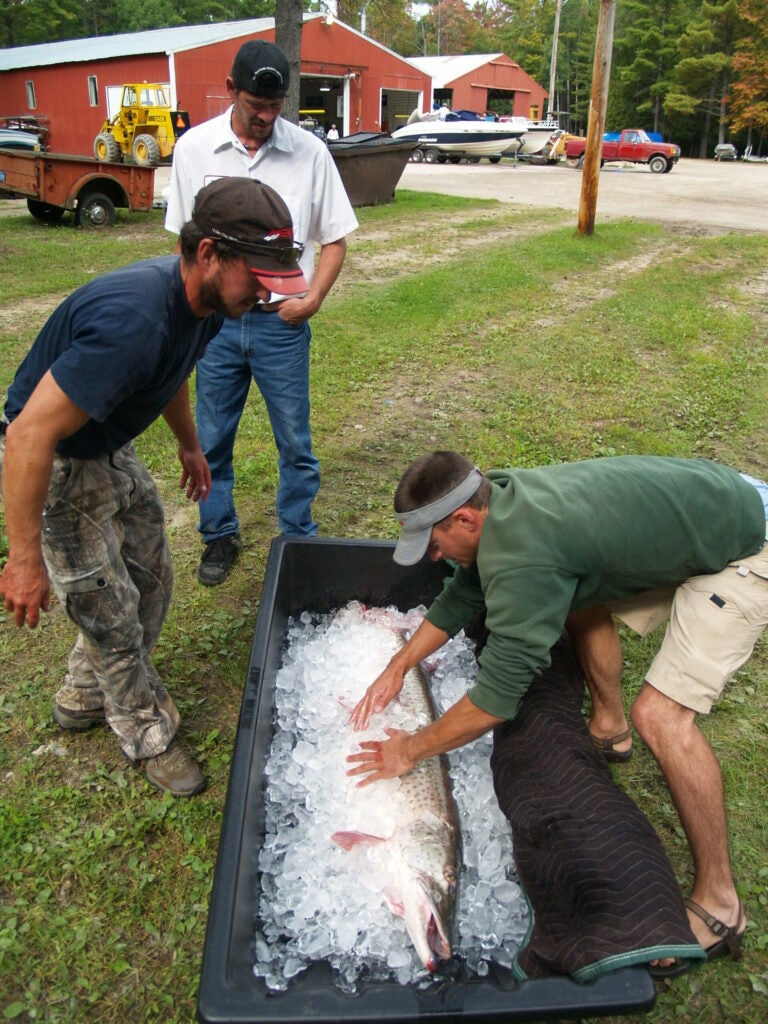 He put the fish into his ice-fishing sled.

When Anderson got back to the dock he put the fish into his ice-fishing sled and packed it in ice before taking it to the weigh station. 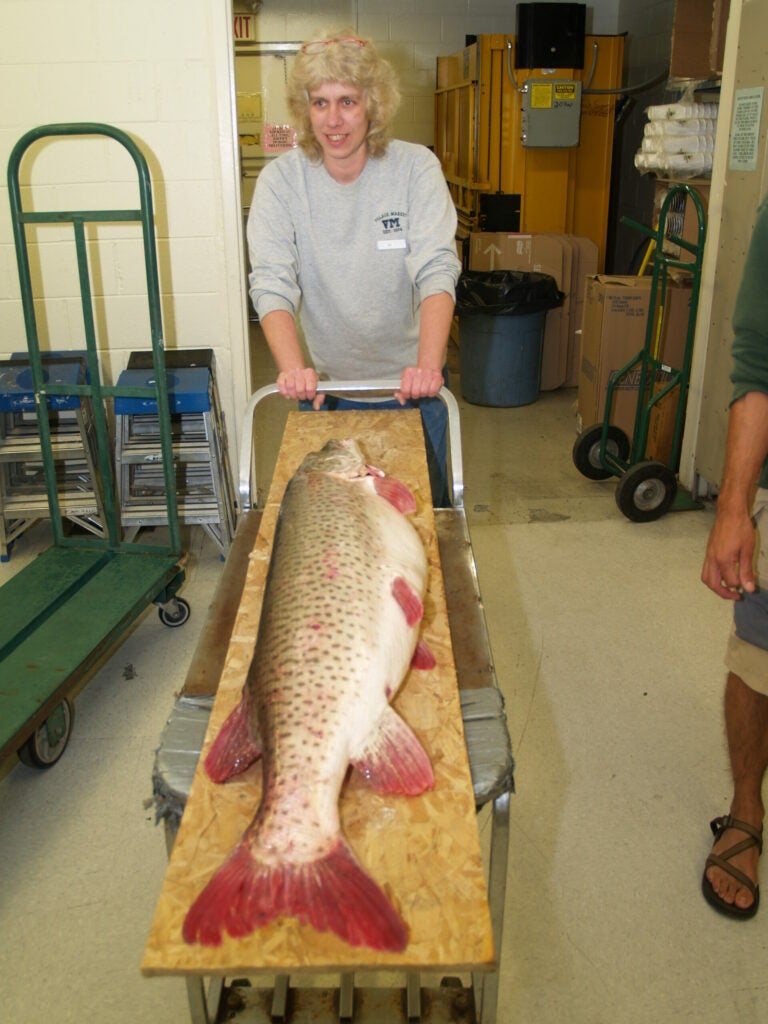 The fish is wheeled to a certified scale by a Village Market employee, in nearby Elk Rapids.

Unfortunately for Anderson, none of the scales he could find, which were all owned by local food retailers, were certified for more than 30 pounds. It wasn’t until 7:30 p.m. that night, nearly 12 hours after he caught the fish, that Anderson was able to weigh it on a scale at Cherry Ke Inc, a fruit processing plant in Antrim County. “We weighed it on four separate certified scales and all gave the same exact reading,” Anderson said. ––David Rose