One is chewy and the other you could almost eat without teeth, but which one is better? 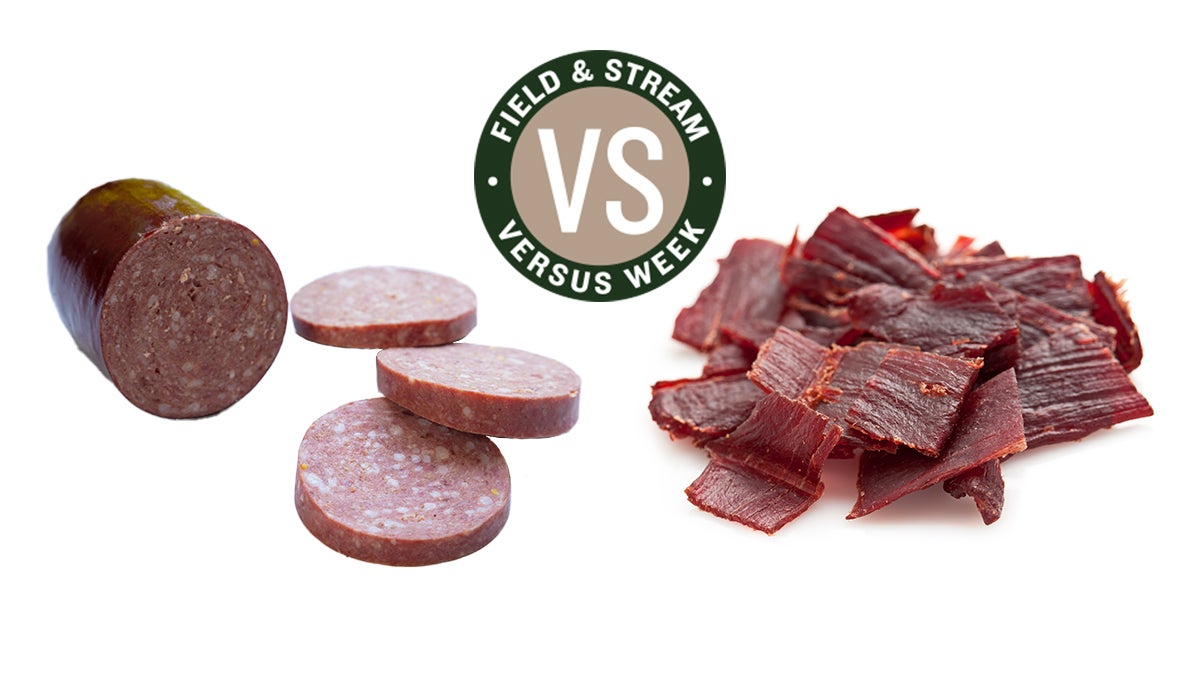 Is jerky or summer sausage the better pick for a deer camp snack?.
SHARE

Editor’s note: As hunters and anglers, we don’t agree on everything. We’ve even been known to argue on occasion. That’s why this week is all about figuring out who’s right and who’s just plain wrong. Every day we’ll be posting stories to get to the bottom of hunting and fishing’s most important debates—like 870 vs. 500, 12 gauge vs. 20 gauge, and fly fishing vs. spin fishing. Today, whitetails editor Scott Bestul goes head-to-head with executive editor Dave Hurteau over the best venison snacks in deer camp. Welcome to Versus Week.

The Case for Summer Sausage

Jerky. Some people like it. Dentists, mostly; gleaming-eyed men and women who build dream homes and finance their kid’s Ivy League educations by fixing the cracked teeth and irritated gums of poor saps who insist on gnawing desiccated deer meat. It’s a safe bet most of those hapless patients are endurance sports athletes who also feel whey powder, energy bars, and sports drinks are suitable substitutes for proper food.

Of course, jerky has other fans. Mountain men, with no prospect of firing a gun or wielding a Bowie knife at something tasty for the next month, chose jerky over grubs, berries, or saguaro cactus all the time.

The rest of us who know what’s good—unlike Hurteau—are taking sausage every time. Think about this: Anyone with a shred of wild game-cooking common sense knows Rule No. 1 is, Don’t overcook the meat. So, what do folks do with jerky? They take a perfectly lovely slice of venison, slice it into mangy strips, throw some chemicals or curing potions on it, and dry it into a chunk of rawhide.

Jerky “aficionados” will protest and point to the softer versions of their favorite dried snack, where lean ground meat is mixed with spices and then dried or cured. Certainly a step up from the normal survival fare, but really just an indication of laziness. With just a little more work you can create a summer sausage that people will line up to eat, then ask for seconds while they hint for the recipe.

Sausage making is equal parts art and craft, where family recipes include the precise amounts of spices, fats, and other additions (cheeses, peppers, wild rice, even berries) are a closely guarded secret. Stuffed into a casing, then lovingly smoked for hours, the final product can be used in sandwiches, cooked for breakfast, or served as an appetizer at a holiday meal or festive event. And, of greatest importance for most of us, summer sausage is that celebrated treat at deer camps across the country. Jerky is the stuff you grab to fill your belly while you freeze in a treestand.

It’s also worth noting that artisanal sausage makers enter their links in national and international competitions and display any ensuing award like an actor would an Oscar. The country’s top jerky makers celebrate when they get their stuff displayed on a truck stop counter.

I’ve lived in deer country for decades, and often I’ll give landowners a stick of sausage as a thank-you gift for the privilege of hunting whitetails on their property. Though invariably kind and gracious by nature, these farmers await their annual summer sausage with enthusiasm and delight. “No need for this, but it’s much appreciated, ” they gush as they accept the delicious venison. “Come on back and hunt next fall.”

Read Next: The Complete Guide to Making Wild Game Sausage

If I tried that with a sack of jerky, you and I both know exactly what would happen: Farmer Joe would give the withered meat to his hounds as a chew-toy, and I’d be asked to pay a lease fee for the coming fall. No thanks. Nevermind that I can’t afford modern lease rates, but I simply don’t treat my friends that way. —Scott Bestul

The Case for Jerky

Jerky, the original protein snack, was made by ancient Egyptians as early as 1386 B.C. who placed it in tombs as a little mummified meat nosh for the journey to Ra, and it lasted there long enough for archeologists to find thousands of years later. The Quechua people of present-day Peru started making a portable meat morsel most like today’s jerky around 1550 using Llama and Alpaca flesh, and they named it “charqui,” from which the word “jerky” comes. Native Americans made pemmican, a sort of jerky meatball of bison, deer, or antelope rolled up with dried fruit. Of the 9 pounds of meat members of the Corp of Discovery consumed per day, much of it was dried into “jurky” or “jirky,” according to expedition journals. For the likes of Jim Bridger and Calamity Jane, jerky was a staple.

In other words, jerky is the snack of rugged outdoorspeople. Now, Bestul argues, as many with underdeveloped jaw muscles do, that jerky is tough. But that misses the point. Jerky is a tough snack for tough people—for mountain men and cowboys and especially hunters and anglers.

But I’m not here to talk up jerky. I am here to bash summer sausage.

Summer sausage is not good. It’s not bad, I suppose, but it’s too rubbery and bland to be good. It was brought to America by German immigrants, along with Vienna sausages and head cheese, and has found its biggest fans in the Upper Midwest, where Bestul lives, and where tuna casserole is also a big hit. I’m not saying there’s anything wrong with tuna casserole. I’m just laying out the facts here.

Summer sausage belongs in that category of things people think are good but aren’t good, like Sting or Dances with Wolves, except it’s not that good. It’s more like Hootie and the Blowfish and Howard the Duck. You know how you know summer sausage isn’t good: People are never pushing jerky on you, but they’re always giving you summer sausage. Every Christmas you get summer sausage that’s still in your fridge by the Fourth of July because you don’t want it to go to waste, but you also don’t want to eat it.

Read Next: The Ultimate Guide to Making Wild Game Jerky

I will admit that venison summer sausage is better than the commercial kind, but only because it doesn’t come with an assortment of smoked cheeses. By rights it should come with a jar of Miracle Whip and a stick of margarine and a bottle hazelnut non-dairy creamer and a block of Velveeta. But it doesn’t, and that’s a plus.

And you know what else is a plus, if someone does give you a stick of venison summer sausage, you can always pawn it off at deer camp. “Go ahead. Have some. I brought plenty.” —Dave Hurteau