If you want to cook the best wild game meat you’ve ever had, learning to avoid these common pitfalls can help 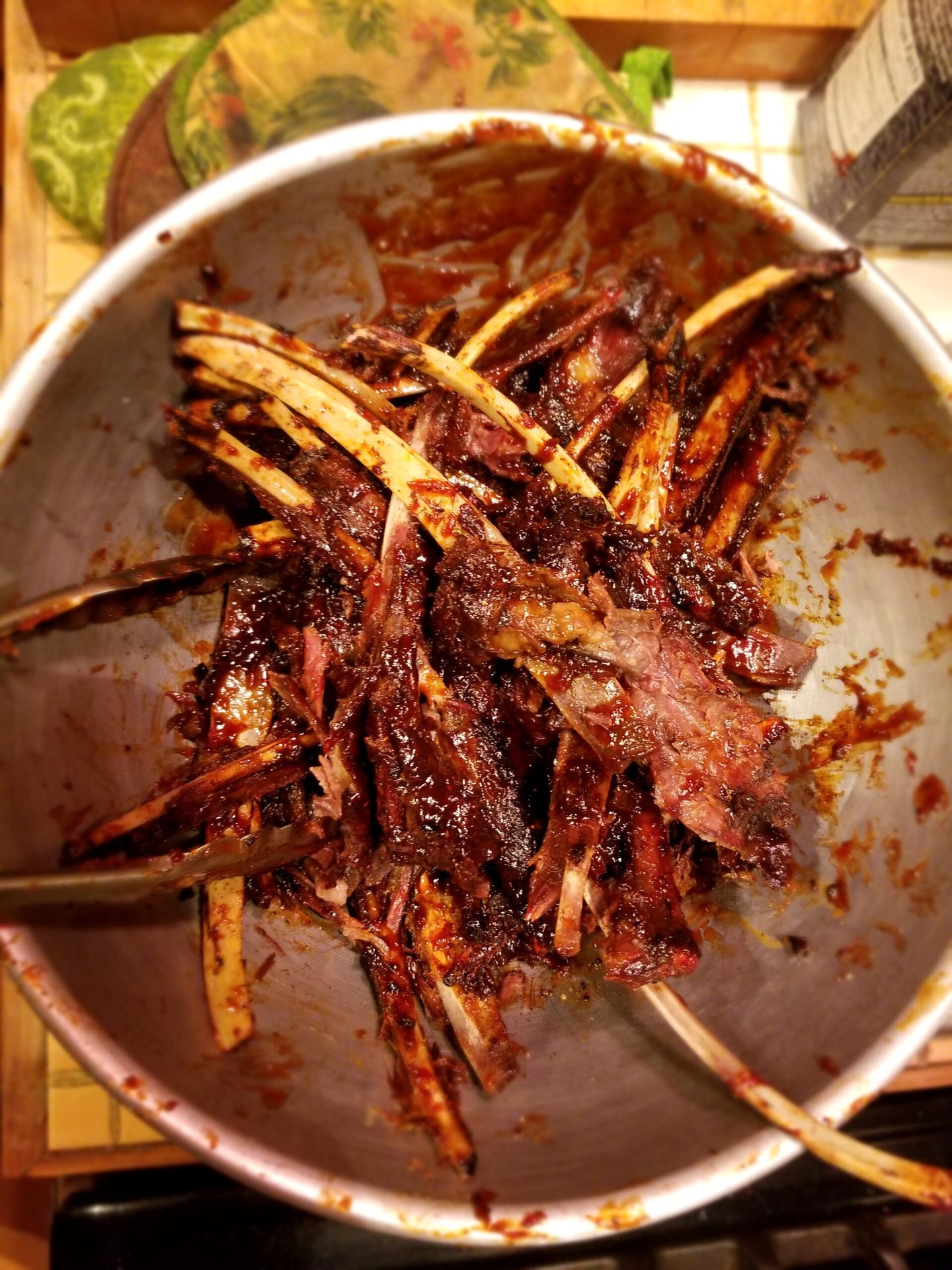 While there’s no “wrong” way to enjoy wild game, there sure are plenty of ways to screw up cooking it. In a world where anybody with a phone can share their bad habits and beliefs on the internet, it’s easy to get lost in the BS. The truth is, whether you’re a newly licensed or lifelong-hunter, there are ways we can all improve the way we cook hard-earned game meat. Here are seven common ways that people mess up wild game cooking and how to fix them.

Mistake #1: Grinding Too Much of the Meat

Hunters have a terrible habit of deboning and grinding anything that’s not a perfect steak or roast. While anybody loves a good burger or meatball, there are some awesome bone-in cuts that a lot of hunters miss out on.

The Fix: Keep the bone on certain cuts.

Cook sections of ribs in the crockpot for a few hours until they soften, then bake or smoke them with your favorite dry rub, finish them with a barbeque sauce glaze, and tell me those aren’t worth the extra effort.

Roast and shred a deer neck.

Neck meat is a lot like a shredded pork butt. Everything from sliders, to tacos, to rich ragouts and pasta sauces work well with a slow-cooked neck roast. Bone-in deer necks are the perfect cut of meat for pulled venison, barbacoa, and similar recipes.

Save shanks for braising and bone marrow.

You may run out of shanks, but you’ll never run out of new and delicious ways to cook them. Slowly braised, the meat becomes tender and unctuous, while the liquid is enriched with the marrow from the shank bone.

Read Next: 5 Tips for Better Braising

Because wild game is so lean, even tender cuts can become dry and chewy if you’re not careful. When you cook something like cubed venison for a stir fry, for example, you’ll notice the meat gives off significantly more liquid into the pan than when cooking an equivalent amount of meat as a larger cut. This is because a bunch of small pieces of meat take up more surface area in the pan than a few large pieces. More pieces over a larger area will fight for a limited supply of heat. And if the heat source can’t keep up, the meat will braise in its own juices, failing to sear properly and eventually becoming dry, overcooked, and chewy.

For a recipe that calls for tender cubes, strips, or other small cuts of meat such as a stir fry or fajitas, it’s usually better to cook your steak, breast, or fillet separately, set it aside while you cook the rest of the ingredients, then cut it up and incorporate it into the dish in the last few steps. This way the meat will be cooked properly, and your dish will be less soggy and more textured than if you had just cut everything up and cooked it together.

Mistake #3: Leaving Too Much Meat in the Woods

Whether it’s just the American palette or simply laziness, the fact remains that a lot of perfectly good pieces of game animals are tossed in the gut pile without a second thought. If you’re guilty of this, you are missing some serious culinary opportunities. Here are a handful of ways to make the most of your kill.

The Fix: Bring Home Every Part of The Animal You Can

From the moment you pull the trigger, start to think holistically about the animal(s) and how you process it (them).

Save bones and carcasses for making wild game stock.

Stock is a concentrated broth that forms the basis for countless soups, sauces, gravies, and more. To make wild game stock: submerge bones and a handful of carrots, onions, and celery, in water and simmer until the liquid has reduced by half, then strain, chill, and skim any fat or tallow from the surface. Portion and freeze the stock for use later.

Take the time to pluck your birds instead of simply breasting them out. Whether it’s a turkey, duck, or pigeon, the legs, thighs, and wings of these birds are all meaty and worth the extra processing time.

Render fat from waterfowl for cooking.

Render the fat from ducks and geese to use as cooking oil or save it for countless other uses.

The pervasive idea that organ meats are “dirty” is downright wrong. Not only are they incredibly good for you, but they can be absolutely delicious when cooked well. While it’s probably a “hard no” for some, you might be surprised how good the heart, liver, tongue, and all sorts of other “weird” pieces can be.

We can all recall a few popular beliefs about wild game meat that we’ve heard repeated again and again. But I can’t honestly think of a single piece of conventional wisdom that holds up to personal experience. Statements like: you can’t refreeze meat; you can’t eat diver ducks; lake trout are gross, or turkey legs are too tough have one thing in common. They’re all dead wrong.

The Fix: Find Out How Different Cuts of Meat Taste For Yourself

Don’t let conventional “wisdom” think for you. Experiment, try new things, and let the experience speak for itself. The worst thing that can happen is that you don’t like the taste of something. You’ll survive.

Mistake #5: Relying on Cooking Gadgets Instead of Learning Techniques

It’s easy to get wrapped up in the newest trends and flashy products endorsed by your favorite Instagram personalities. While there’s nothing wrong with trying new things or supporting businesses you believe in, these products can keep you from becoming a better wild game cook if you rely on them exclusively.

Learn how to do something rather than just how to use something. Pellet grills, sous vide circulators, and seasoning kits are all awesome tools, but they can limit your ability to improvise in the kitchen. Developing basic culinary skills and instincts will take you much further.

Mistake #6: Using Backstrap for Everything

The backstrap is pretty much everyone’s favorite part of a deer, elk, moose, or antelope. Because of this, it’s usually the first thing you run out of. Being a beloved and finite resource, backstrap should be saved for special meals and cooked with the same regard as the finest beef or lamb.

The Fix: Respect the Strap

I’m not about to badmouth your favorite chicken fried steak recipe, but there are other cuts, such as those from the hindquarter, that are great substitutes for precious backstrap. Think about it like this: If you’re inclined to let a spike buck walk to grow into a better buck, let that backstrap sit in the freezer to wait for a better meal. Sure you can enjoy the instant gratification of using backstrap for the usual recipes, but there’s something special about holding out. Treat your backstrap with the same reverence you would a trophy buck or it will be gone before you know it.

Read Next: 7 Rules for The Greatest Backstrap of Your Life

Mistake #7: Not Forming a Good Sear on Meat

One of the easiest ways to improve your cooking is to master the searing process. Searing forms an outer layer of crust that provides flavor and texture to the exterior of meat and prevents its natural juices from escaping. Whether it’s a backstrap, duck breast, or a blade roast destined for the crockpot, a good sear is the crucial first step that lays the foundation for the rest of the dish.

The Fix: Learn How to Sear Meat

To sear correctly, start with a piping hot pan or grill and cook larger pieces in smaller batches with plenty of space. Let a nice crust form before you flip the meat. A good dry rub can really help caramelization and the formation of the crust layer. Repeat the sear on all sides and even the ends. For pan-searing, you’ll want to use some sort of fat such as olive oil or butter and actively regulate the temperature to keep it hot enough for a good sear, but no so hot that the meat burns. On the grill, you’ll skip the fat but the other principles are pretty much the same.