Ask Petzal: The most expensive gun he’s ever fired, peeing off the stand, and deer-camp no-nos 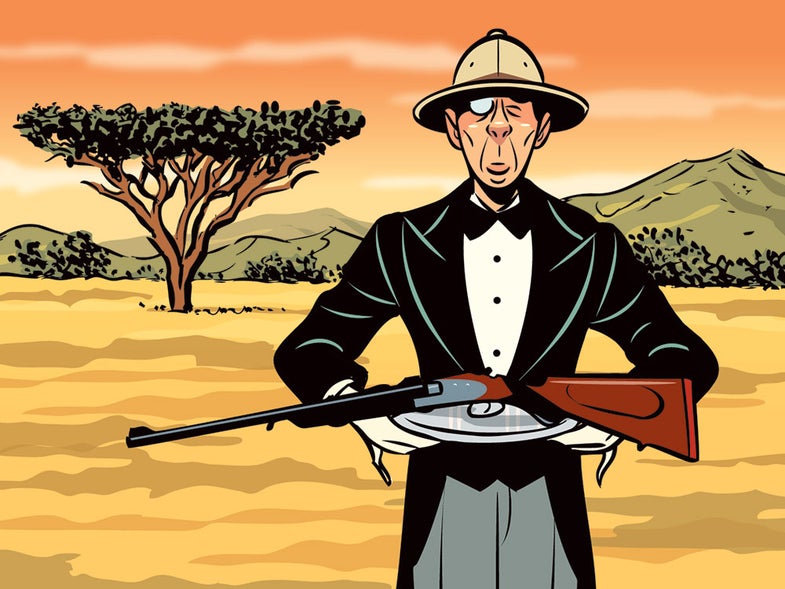 Q: What is the most expensive rifle you’ve ever fired? —Jimmy ­Lamond, Plattsburgh, N.Y.

A: That would probably be a Holland & Holland .577 Nitro Express, which costs in the neighborhood of $150,000 today. The damned thing doubled on me. The odd thing was, it didn’t kick all that bad, probably because it weighed over 15 pounds. It was just an irresistible shove backward, accompanied by a thunderclap.

Q: If you could carry one gun for hiking and protection, what would it be? —Jay L. Bolyard, Fellowsville, W.Va.

A: I would carry a 5-inch-barrel Smith & Wesson Model 629 .44 Magnum. For bears, load it with magnums. For general protection, use .44 Specials.

A: I’m partial to hash, either corned beef or roast beef. If it’s the former, throw a couple of fried eggs on top, and with either one, heavy on the onions. Good hash should sit in the stomach like wet cement so that you know you have, by God, eaten something.

Q: In 25 words or less, how would you describe Jim Carmichel? —Stan Kemmerer, Spring Creek, Nev.

A: In 25 words or less, Jim Carmichel is a genius. In a few more words, I don’t know anyone else who has been able to acquire so much knowledge in so many different fields and put it to so much good use.

Q: I am getting a little long in the tooth and seemingly smaller in the bladder. Is it OK to go off the stand? —Mark Levy, Modjeska canyon, Calif.

A: I’ve conducted exhaustive experiments on the subject and have come to the unequivocal conclusion that animals don’t care where we pee, or if we pee, or how much. The strongest emotion I’ve ever seen an animal exhibit on encountering a pee patch is mild interest.

A: Without a doubt, the most unwelcome sight is some jerk who is casual about gun safety. I’ve walked off, I think, at least four hunts because someone was giving me the creeps.

Q: How can you tell if a ­barrel has been damaged by a cleaning rod? —Chauncey Worthington III, Hartford, Conn.

A: Look for signs of wear at the muzzle and the chamber. You’ll see that the bore is slightly out of round. I saw one rifle whose chamber was actually worn egg-shaped by a cleaning rod.