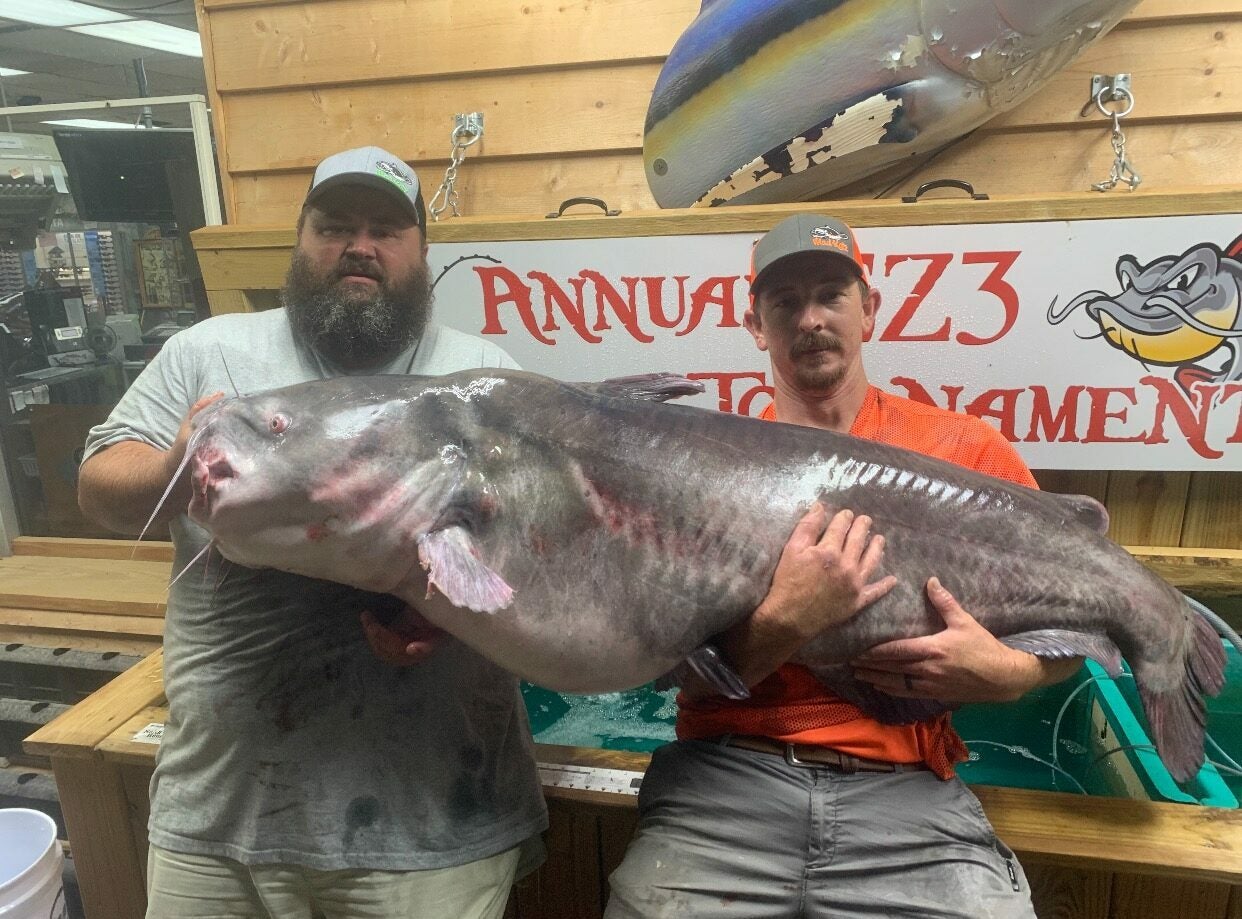 Rocky Baker, an angler from Four Oaks, North Carolina, smashed the old state record for blue catfish with a 127-pounder. On Saturday night, Baker soaked a small 2- to 3-inch gizzard shad at one of his favorite fishing holes. “We were just anchored up between a couple of trash piles on the Roanoke River near Williamston,” Baker says. “It had just got dark. We already caught a 51-, a 40-, and a 30-pounder in the daylight.”

Around 9:30 p.m. is when a fish of epic proportions took his shad.

“That rod just doubled-up, man,” he says. “It felt like [the fish] was pulling a Volkswagen up the river,” noting that the fish swam from one side of the river to the other at least six times once it was hooked. “We fought it for 20 to 30 good minutes. When we finally got the daggone thing in the boat, it felt like an eternity.”

Baker is an experienced catfish angler and hits the water at least once a week. He’d pulled 60-plus pound blue cats out of that same spot before, and his personal record blue was an 80-pounder. But nothing prepared him for the epic proportions of the monster he saw on the end of his line.

Baker was fishing out of his buddy Justin Clifton’s boat. Clifton helped Baker net the behemoth cat and drag it aboard, which, according to Baker, “was like pulling a dead body into the boat.”

The duo tried to weigh the fish with a scale they kept on the boat, but the scale’s limit was 110 pounds. They maxed it out without lifting the fish off the deck. Knowing they might have a potential record, they met up with another friend who had a live well before transporting it to E-Z Bait and Tackle where they could weigh the cat on a certified scale.

Baker and his buddies waited until around 5:30 a.m. for a state biologist to arrive for an official weigh-in. The blue cat came in at 127.1 pounds, smashing the previous record of a 121-pound blue cat that Joey Baird pulled out of Lake Gaston. Baker caught his fish using a Mad Katz Catfish Down Rod with a Penn Squall 20 Reel spooled with 40-pound-test Berkeley ProSpec Chrome mono.

It was a dream come true.

“Most people that take catfishing pretty serious, whether they can admit it or not, would like to catch a record cat,” he says.

And Baker is damn serious about catfishing. He also fishes for channel and flathead catfish, but blue cats fight the hardest—and are the largest species of catfish in North America. For him, catfishing isn’t just about catching record-book fish, but the experience.

“You ever get annoyed sitting in traffic?” asks Baker, who drives an 18-wheeler for his day job, and knows traffic well. “That’s what I like about catfishing. You get total relaxation. You can shoot the shit with your friends, or whatever. Even on our bad days, I’m like, ‘Dude, somebody’s in traffic out there.’ I just like being away.”

After the weigh-in, Baker and his buddies released the catfish back into the Roanoke River. Baker and his friends are committed catch-and-release anglers. “We don’t keep none of our fish,” he says. “I wouldn’t call us meat-fishermen at all. We’re about pure entertainment. We’d throw back a 1-pound fish as fast as we throw back a 50-pound fish.”

And this weekend, they threw back a 127-pound state record blue catfish.