8 Ways to Keep Your Guns From Getting Rusty

Without the right protection and maintenance, your hunting guns could rust to the point of no return 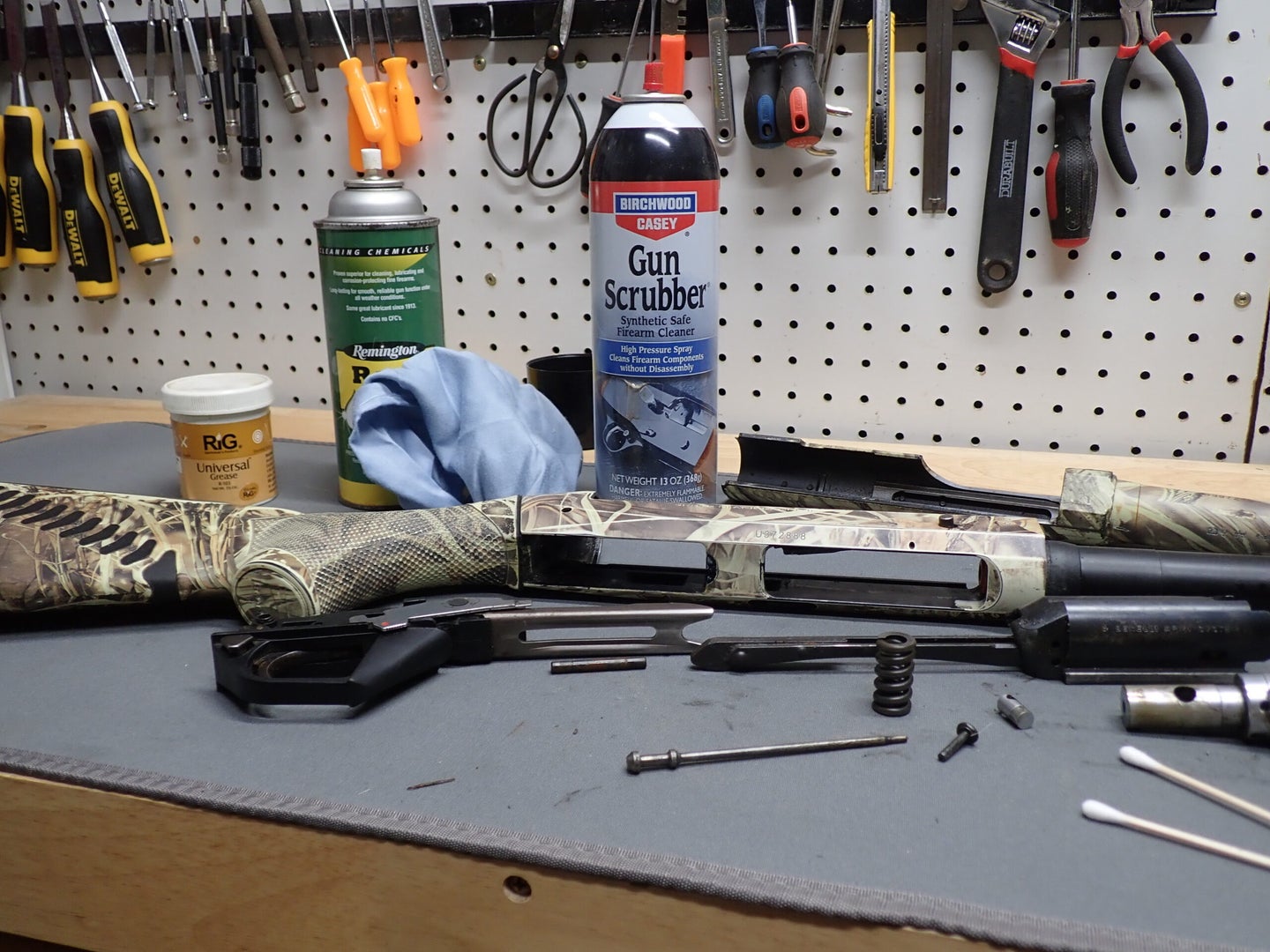 Give your duck-hunting shotgun a good cleaning between hunts to prevent rust. Joseph Albanese
SHARE

Rust occurs through a chemical reaction that happens when iron, or iron alloys like steel, come into contact with water and oxygen. Some things can exacerbate this situation, like the oils and salts transferred from your fingertips, which trap moisture.

If your gun falls victim to rust, you can usually take care of it yourself. Surface rust can be removed with a nylon or brass-bristle brush, some cleaning solvent, and a bunch of elbow grease. Rust that’s deep enough to form pits may require a trip to the gunsmith. But, if you use the following strategies to prevent rust in the first place, that won’t happen.

1. Know the Difference Between Gun Oil and Solvent

It’s my understanding that the “WD” in WD 40 stands for “water displacing”, and as such it should be used to rid metallic surfaces of water—not as a protective coating or lubricant. Likewise, solvent-based cleaners do an excellent job of dissolving carbon and other built-up crud from your gun but do very little to protect it. A proper gun oil—or rather lube as many are synthetic and don’t contain any petroleum distillates—coats metal to prevent oxygen and moisture from wreaking havoc. I’m partial to Rem Oil, but there are a variety of excellent gun lubes on the market. Some perform multiple functions, like CLP formulas that serve as cleaner, lubricant, and protectant. Rifle shooters looking to minimize the stuff laying on their workbench should grab a can of Break Free CLP and be done with it.

Whatever gun lube you choose, don’t overdo it. Too much oil attracts dirt, and can hinder actions, especially in cold weather. If you’re venturing out in the cold, opt for a synthetic lube like Shooter’s Choice FP-10 or G96 Gun Treatment. Also keep a can of Rem Oil and a few rags in your truck, to wipe down your gun before it goes back in the case—especially if it’s been raining or snowing.

2. Use Grease To Protect Your Gun From the Elements

Most of my hunting happens in or around salt water. Many hunters I know coat their duck guns liberally in all manner of tinctures, including marine grease and even Vaseline. I’ve never been a fan of using things like Vaseline on my firearms, but I do slather them in purpose-built grease.

Unlike oil, grease has a thicker consistency and tends to stay where you put it. It won’t get washed off in driving rain or run down to the bottom of your gun safe. Rust Inhibiting Grease, or RIG as it’s more commonly known, is fantastic stuff that penetrates into metal surfaces and stays there to form a barrier against corrosion. I even use it to keep my truck’s recovery gear rust-free on the beach. RIG’s directions say it’s safe to use in rifle bores, but I would caution against it. If a blob of dried grease meets the cloud of gases from a detonated round, it could cause pressures in your barrel to jump to unsafe levels.

RIG’s downfall is a lack of lubricity; so don’t use it on moving parts. A better choice for this is white lithium grease, or the aforementioned marine grease if you’re around saltwater. These are perfect for the hinge areas on break-action shotguns, as well as for ensuring choke tubes don’t get stuck.

3. Coat a Gun with Wax for Added Protection

My introduction to wax came after I applied a faux color case hardening finish to the metalwork on a muzzle-loading shotgun. To achieve the distinctive look, I interrupted a traditional cold-bluing process by pouring water on the metal to cut the chemical reaction short. This created an impressive array of colors, but the incomplete reaction didn’t offer the same protection of the bluing and left the metal more susceptible to rust.

To prevent issues in the future, I coated the gun in a few coats of wax. Several years later, the faux finish looks much the same as it did when first applied. Because of the way wax fills pores, it’s ideal for older Damascus or twist-steel barrels, and it’s an excellent way to protect wooden gunstocks. Just be sure that you don’t put too much on and fill up the checkering. Renaissance Wax is the brand that Larry Potterfield of Midway USA recommends, but I have also had excellent results with Flitz Rifle, Gun, & Knife Wax.

With ammo prices being as high as they are, I can’t fault anyone for using the cheapest stuff they can find. Almost everything available today uses non-corrosive primers, but there are some folks letting go of their stockpiles of older, corrosive ammo to cash in on the rise in prices.

Rounds ignited with potassium chlorate or sodium chloride primers are highly caustic, and can quickly affect metal surfaces they come in contact with. The salts formed by the combustion of these compounds will deposit themselves all over the gun and will attract moisture and form rust.

The site of ignition is obviously most subject to the effects, but the barrel, bolt, and muzzle brake, if your gun has one, can all be affected. Ammonia used to be the go-to for removing these harsh deposits, but Simple Green is much easier on the environment and your lungs. If you shoot corrosive ammo, give all the metalwork on your gun a thorough scrubbing in a Simple-Green-and-water bath before cleaning and oiling as usual.

5. Keep Your Gun Out of Salt Water if You Can, and Clean it Thoroughly if You Can’t

We have a saying here on the coast: You don’t own anything, the salt just lets you hold on to it for a while. I do my best to keep my shotgun out of the brine, but it always ends up sitting in a couple inches of saltwater in the bottom of my duck boat.

If my shotgun gets immersed, I disassemble it into its major components and rinse it off with fresh water in the shower. Then I use an air compressor fitted with a blowgun to force water out of all of the crevices, but canned air will also work. Next up is a thorough cleaning, a wipe down with Rem Oil, and finally a coating of RIG on all exposed metal. It’s a lot of work, but it’s kept my Benelli (mostly) rust-free for almost a decade.

6. Get a Gun With a High Tech Coating That Prevents Rust

Part of the reason my duck gun has fared so well over the years is the graphic clinging to the surface. Hydro-dipping was introduced to the gun world in the 1990s and offers good looks as well as protection from rough conditions. Unfortunately, the film is only a couple of mils thick and is prone to scratching. Cerakote has become popular recently, and the baked-on coating is more durable than water-transfer films.

Many gun shops can apply Cerakote to your favorite gun, giving it a new look and plenty of added protection from the elements. But even Cerakote has its limitations, and it can be scratched with hard use. The most resilient coating around is Benelli’s new B.E.S.T. treatment—a diamond-like coating that protects against both the elements and abrasion. Unfortunately, if you want the most durable rust protection available, you’ll have to spring for a new gun. But you can rest easy knowing that it will last. Benelli backs guns built with the B.E.S.T. treatment with a 25-year warranty against rust and corrosion.

7. Keep Your Gun Out of Its Case to Prevent Rust

Gun cases are great at protecting your gun’s zero from bumps on the road, but they aren’t ideal for long-term storage. The soft substrate that cushions your gun is a haven for moisture, so don’t get lazy and leave your deer gun in the case while you scarf down dinner after a hunt. If you do, you’ll find a rusty rifle when you head to your stand in the morning.

Remove your gun from the case as soon as possible, even if you’re going to be back in the field in a few hours. You should also note that taking a cold gun from your car into a warm environment—like the cabin at deer camp—will cause condensation to occur. For added protection, consider tossing a small packet of silica desiccant in your gun case to sop up any moisture.

Read Next: How to Clean a Rifle

8. Add a Climate-Control System to Your Gun Safe

The door on your gun safe does a better job of keeping thieves out than it does moisture. And the heavy weight of a safe often requires it to be placed in the basement, but these areas are usually very humid. To ensure your firearms stay rust-free when they’re tucked away, you’re going to need some additional protection.

The National Firearms Museum stores its collection at 50 to 55 percent humidity at 70 degrees Fahrenheit to keep their pieces of history as pristine as possible. You can replicate those conditions in your safe by using a dehumidifier such as a Goldenrod, which heats up and circulates warm, dry air throughout the safe. If you don’t have a power outlet nearby, you can use silica gel, which will soak up excess moisture. Use a hygrometer/thermometer to make sure moisture levels or temperatures don’t get too high. And there is such a thing as too dry: Below 30-percent humidity, you run the risk of having the wood stocks on your guns dry out and split. But a good coat of wax will lessen this possibility.