Sorry, But Your Remington Autoloader Is a Crappy Deer Rifle

Are you a big-woods hunter who loves his Remington auto? Okay, well, David E. Petzal thinks your rifle sucks and is going to tell you why 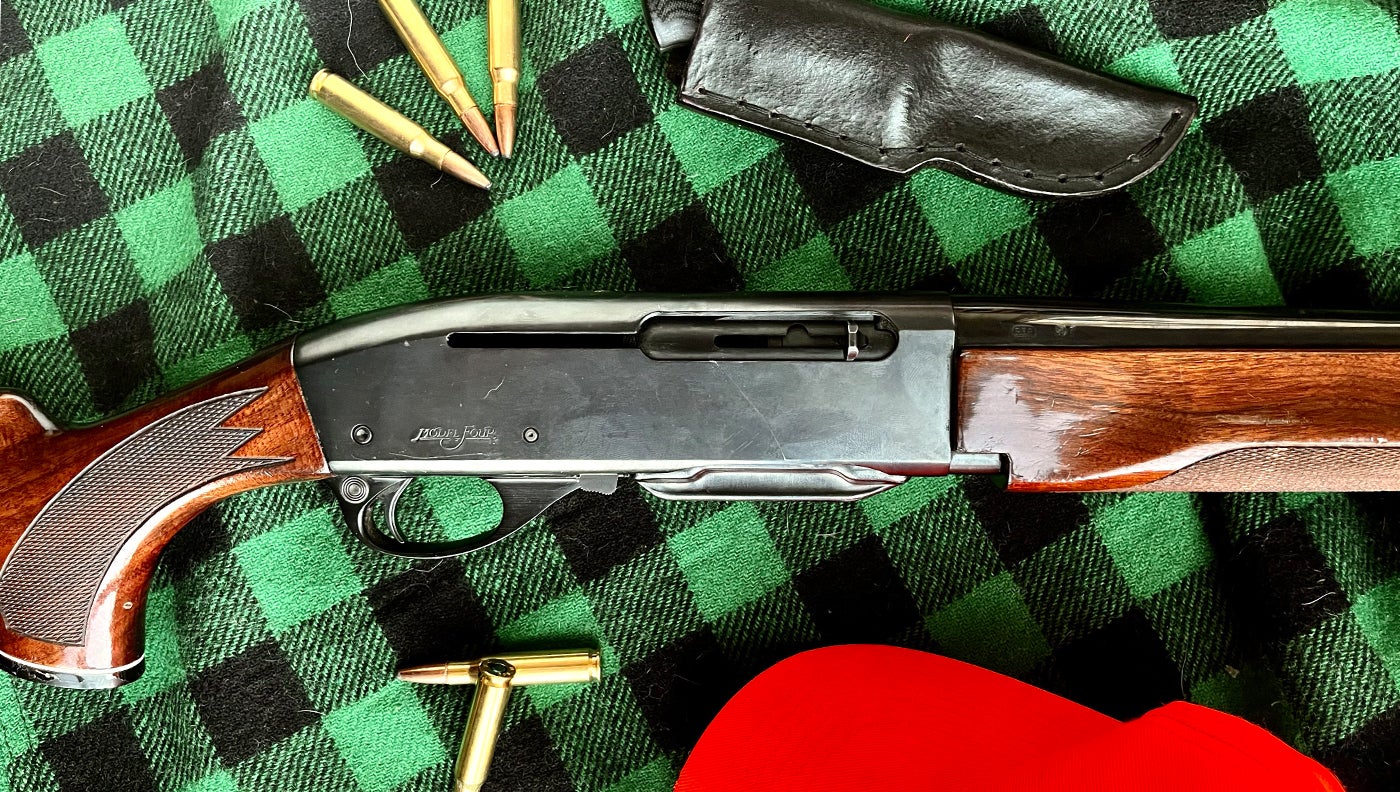 People are strange about guns. I can point out that the Marlin 336 is a better lever-action rifle than the Winchester Model 94 and back up the claim, and that the Savage 99 (rotary-magazine version) is better than the Marlin, but that will not alter the Model 94’s status as the deer rifle of all time.

When I joined the Army in 1963, it was transitioning from the M1 Garand to the M-14, and there were a great many soldiers still serving who had fought World War II and Korea with the M1 and detested the M-14, even though it was a better rifle. And you could not convince them otherwise.

This article is all about the many failings of the Remington Model 742 Woodsmaster, but the fact is that the Model 742 and its descendants have been highly successful rifles, and a lot of people love them and would not use anything else, and, to them, my lecturing on the gun’s shortcomings won’t amount to a fart in the wind. But that won’t stop me farting.

Read Next: Take Heart, Your Remington Pump Gun is a Find Deer Rifle

How the Remington Jamomatic Got Its Reputation

If you hunt deer with a Remington autoloading rifle, your gun was most likely made after 1955, when the company introduced the Model 740 Woodsmaster. (Otherwise, you’re one of a dwindling few who still carries the old and groundbreaking Model 8, or 81, and are off the hook for this discussion.) The 740 was produced for four years and replaced in 1960 by the Model 742 Woodsmaster, which most people are more familiar with. Like the 740, the 742 was sleek and streamlined, with a gas-operated action similar to that of the Model 1100 shotgun, which would debut in 1963. The 742 was an enormous success. One million, four hundred thousand were sold. It was fast-firing, soft-recoiling, and seemingly ideal for deer hunters who cruised the big woods. Vermonter Larry Benoit, who came to great fame as a taker of stupefying whitetails, used a 742 with a big rear peep and a gold front sight. But the Woodsmaster was flawed. It often didn’t work very well. Or work at all.

The 742 was followed in 1980 by the 7400, which was also called Woodsmaster, and then by the Model 750, and like so many Remington rifles and shotguns, they didn’t work very well. Collectively, these guns are so reliably unreliable that they’re known as Jamomatics. To be fair, the Remington autos are not alone in this respect. The Ruger Deerstalker is notorious for jamming. The Winchester Model 100 is responsible for many an animal dying of old age. I hunted with a Browning BAR owner whose rifle was constantly giving him grief, albeit the gun was kept in a state of Terminal Filth.

Related: The 6 Best Rifles for Hunting the Big Woods

I believe that semi-auto reliability problems lie as much as with the people who use the guns as with the rifles themselves. As a rule, hunters who buy semi-autos have no faith in their marksmanship. They never shoot except to sight in their rifles before opening day. When they do sight in, it’s often at 50 yards (“Why go farther?”) at a paper plate (“If I can hit that I can hit a deer.”). I witnessed the results of this approach years ago in Wyoming, when a station wagon with Pennsylvania plates stopped on the prairie so one of its passengers, armed with a 742, could put the power to a young and possibly brain-damaged buck antelope at 90 yards or so. The yahoo with the auto rifle fired 18 rounds, which kicked up dust around the bemused beast, and then finally killed the poor thing with the 19th shot, leaving one spare in the box just in case. His friends taped the debacle, and no doubt replayed it that night to howls of merriment.

Nimrods of this stripe go home from the hunt and put their rifles away without cleaning them. If the guns have been rained or snowed on, they’re put away wet. If their owners do oil them, they squirt it on by the pint and are likely to use the same goop that goes into the snow blower, or with WD-40, which is guaranteed to gum up in the cold. Given this kind of treatment, you can hardly blame an auto for jamming.

Not to let the 742-family of Jamomatics off the hook. They are trouble waiting to happen. Here are some of the most common complaints:

Related: The 8 Best Lever Action Rifles Ever Made

Because laymen and gunsmiths don’t look at firearms in the same way, I asked my long-time friend and gunsmith John Blauvelt to weigh in. John has been repairing Remington autos for 40 years:

The 742 has a gas system that no one ever maintains or reads the owner’s manual on how to clean it. Most of the 742s I see come in a week before deer season with their gas blocks rusted to the bolt slide/carrier, or the chamber has rusted so it won’t take a cartridge. This comes from putting the rifles away dirty and wet and leaving them to rust all year until the next deer season. The gas check ball in the gas block will carbon up and rust, and then it’s a bear to get out to be able to clean the gas ports.

The 742 uses a 9-lug locking bolt head that, when it slams all the way back, twists, and the lugs bang into the bolt-guide grooves and chew them up so badly that they can’t be repaired. You’ll need a new receiver, except you can’t get one any more. The fire-control unit and trigger guard are made of cast aluminum, so if you drop the rifle on the trigger guard it will break. Also, the bolt locks open by contacting the empty magazine. If you have your finger inside the ejection port when you remove the magazine, the bolt will slam forward and smash your finger.

Why Test Fate With a Jamomatic?

If you tour the firearms websites, you’ll end up baffled. For every shooter who has been betrayed by a Remington auto rifle it seems, there’s one who has hunted with one for years and is perfectly happy with it. (Note, however, that the people who go on these websites are not the types to neglect their guns.)

On the other hand, there are lots of horror stories. If you read the same tales over and over and over, a pattern emerges, and it’s this: Traditional hunting autoloading rifles seem more prone to malfunction than levers, pumps, or bolts, and the odds that something will go wrong are pretty good, even with a gun that is properly maintained. ARs are in a different category. I’ve seen a few cheap ones that were garbage, but the good ones, treated right, will shoot forever and never miss a beat. And if something does go wrong, it’s usually a pretty easy fix.

The only “advantage” Jamomatics offer is a fast second, third, and fourth shot. But when you pull the trigger on a game animal, the issue is almost always decided with the first shot. If you wound the animal, or miss altogether, rapid fire will usually not help. Before you send that next shot, you have to figure out what went wrong and how to correct. Once-a-year shooters can no more do this than they can fly. Their reaction is to go into panic mode and keep pulling the trigger until the rifle goes click. (Assuming it hasn’t jammed in the meantime.) Competent riflemen can get off repeat shots so fast with bolts and levers and pumps that an auto offers no advantage.

Sitting in my gun closet, retired with great honor after 26 years of constant, heavy use is a deadly-accurate Remington 700 .30/06 that is now well into its second barrel, which means that it’s cycled something like 7,500 rounds. I’ve fired everything through it but Minie balls and tracer under every condition imaginable. It’s never failed.

Why would I want a Jamomatic?