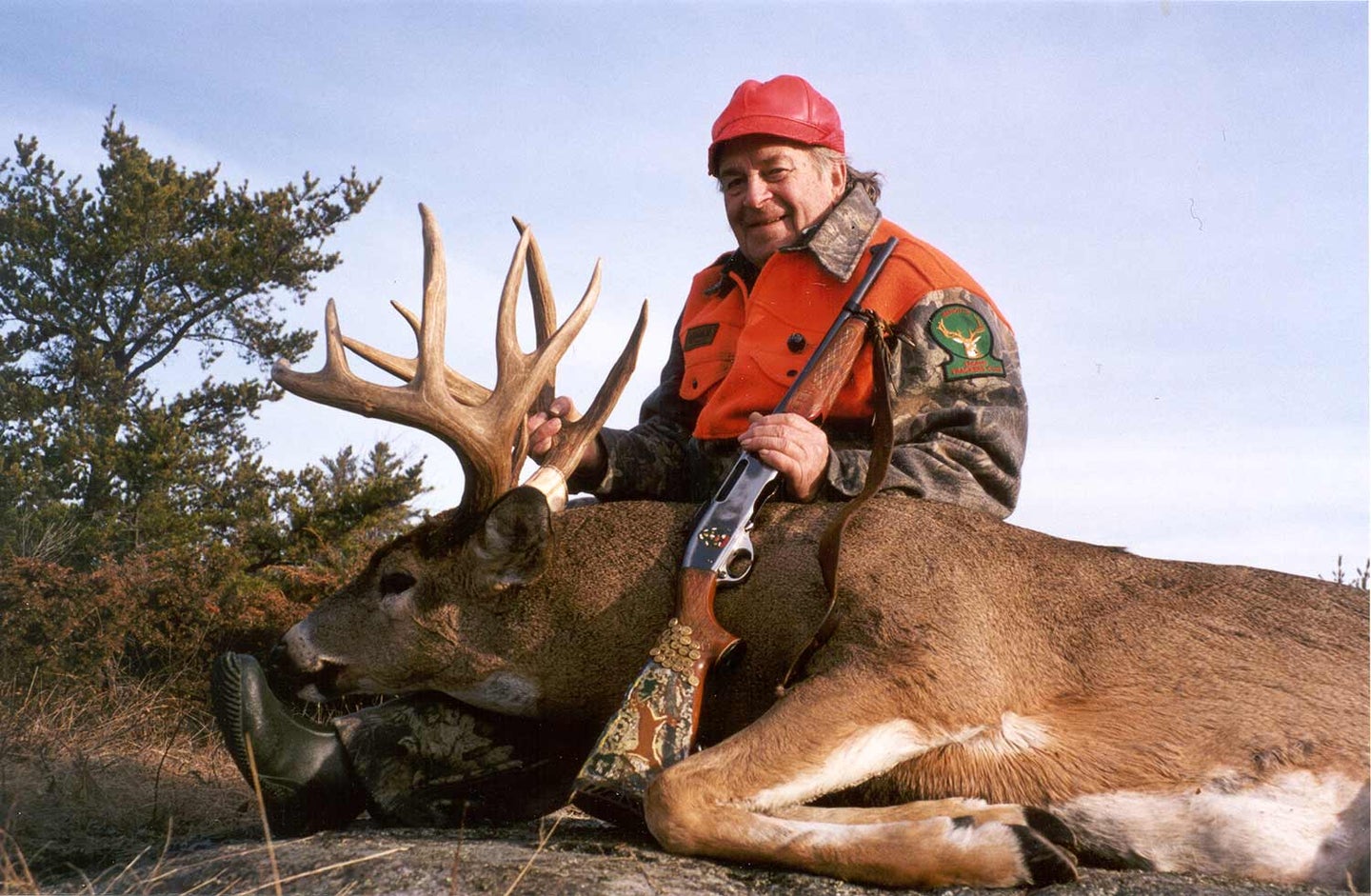 Larry Benoit pictured with his rifle and a buck from the big woods. Tom Blais
SHARE

Big woods rifles are brute in performance and ballerina in design. The best rifles will fit like a shotgun so that you can shoot fast, using instinct as much as the sights. They are light and fit the hand well so you can carry them over miles of woods. A rifle also needs to be reliable and tough enough to handle the nasty weather.

What Makes Deer Hunting in the Big Woods so Tough

Hunting the big woods of the North Country is different than any other kind of whitetail deer hunting. The severe winters keep deer populations relatively low and huge expanses of land are populated with only the few deer that can survive in a much smaller winter habitat. In these big-country wilderness areas, deer densities are low and there are often miles and miles of empty country between trophy bucks.

But, oh those bucks!

Bergmann’s rule states that the further north a segment of any species lives, the larger the body mass. Simply put, the colder the country, the bigger the deer. Darwin’s “survival of the fittest” maintains that only the biggest and strongest of those survive the winters and are around to reproduce.

The result is evident in North Country big woods bucks. They are big, burly, and tough. They can weigh up to 400 pounds, which is getting into elk territory. (Don’t believe me? Check the old records from Maine.) Traditionally trophies are measured by weight rather than inches of antlers, and by that standard, these thick-necked brutes are the pinnacle of whitetail bucks.

Hunting styles are a bit different too. Sitting in a stand can be a cold, lonely, empty pastime. It’s not unusual for a hunter to hang off a tree the entire season and not see a deer. The most successful hunters in the big woods hunt on the move. They don’t wait for the deer; they walk out and go find them. Tracking is the most productive method; still hunting a distant second.

When it comes to shooting with these hunting techniques, it’s nothing like the deer hunts you see on television. If you wait for the “perfect shot” or refuse to shoot at a running deer, you may as well lighten your load and leave your ammo home. You won’t be needing it. Shot placement is rarely perfect, so you want to drive the bullet deep.

These are the biggest, toughest whitetails alive, and you are hunting them under the toughest conditions and with some of the most difficult shooting scenarios. That calls for fast-handling guns and big cartridges that hit hard and penetrate deep.

My gun of choice for big woods hunting has long been a Remington pump-action rifle. It points like a shotgun, is extremely fast for the first shot and any follow-up, carries well in the hand, and is offered in some thumper cartridges.

The pump-action Remington rifles were popularized by the legendary deer-tracking Benoit family. These hunting rifles were, and may still be, the most common deer rifle in the big woods. Many hunters prefer the shorter barrel of a carbine, although I prefer the full-length 22-inch barrel as I feel it swings more smoothly when shooting at moving bucks.

Over the years, I have left a lot of footprints on the mountains while lugging my old Remington Model 760 in .30/06 Springfield, which is the most popular cartridge with big woods hunters. I bought it as soon as I had my first full-time job in the early ’70s. It was my first “deer rifle” dedicated to that use only, and it’s made a lot of venison in the past 46 years.

The Model 7600 replaced the Model 760 in the early ’80s, and my current favorite is a semi-custom .35 Whelen Model 7600. The Whelen hits those big bucks so hard they just quit. I always get a good blood trail from the exit, although I rarely need it. Check availability for the Remington 7600 here.

My first deer fell in 1966 to a worn-out, butchered up 1892 Winchester in .38-40 Winchester. Over the years, I used lever-action rifles in just about every popular cartridge ever chambered for them. My favorite lever gun for deer for a long time was a Marlin 1895 with a 22-inch barrel in .45-70 Government. I switched to the shorter 18 ½-inch barrel Guide Gun model when that was introduced. I love the way that compact rifle handles and shoots.

The .45-70 cartridge dates back to 1873, yet it’s still going strong. It hits hard and recoil is easy to control for follow-up shots. I shot a whitetail last year with a Marlin .45-70, using Barnes 300-grain Vor-Tx ammo and, it dropped like you turned off a switch. Check availability for the Marlin 1895 here.

Read Next: The Big-Woods Squeeze

Bolt-action rifles dominate the market today and are preferred by a lot of hunters. Anybody who thinks a bolt action is a handicap has clearly never seen one run by somebody who knows how. They can be fast; it just takes practice.

Bolt guns are extremely durable, and with a low-power scope, they are really quick on target. There are a huge number of options with bolt-action rifles. But for the big woods, they should be light, easy to carry, and chambered in a cartridge that hits hard. Most hunters opt for a shorter barrel as well.

My favorite bolt action for hunting the North Country is the Remington Model Seven. This rifle is light and compact. The receiver is shorter than the full-size Remington Model 700 SA and the barrel is 20 inches. This reduces weight and makes the rifle a delight to use in the thick brush. The stainless/synthetic model is well suited for nasty weather that always shows up during deer season. It’s available in .308 Win., which is a good choice, but don’t overlook the .300 WSM. Recoil is a little stiff in this light rifle, but that cartridge destroys big deer.

Actually, my favorite Model Seven is a CDL model in .350 Remington Magnum. I once shot a large black bear end for end with a .350 Rem Mag using 200-grain Barnes bullets and handloads. Remington dropped the cartridge, but you might find a used rifle around if you look hard enough. Check availability for the Remington Model Seven here.

Mine ain’t for sale.

Semi-auto rifles have long been popular with big woods hunters for obvious reasons. The Remington line runs way back to the Model 8, which was the first successful semi-auto for hunters. Back then, hunters in the know picked the .35 Remington. The later Remington rifles, the Model 740, 742, and 7400 always had a big following with big woods hunters. Larry Benoit was best known for the pump-action rifle, but when he launched a whitetail revolution by appearing on the cover of Sports Afield in 1970, he had a Remington Model 742 in the photo.

Those Remington semi-autos were chambered for all the popular cartridges, but I don’t recall meeting a hunter in the woods with anything other than a .30/06. They killed that line with the abominable Model 750, which Remington dropped a few years back and never replaced. That ended 100-plus years of Remington semi-auto hunting rifles. They have their line of AR rifles for hunting, but it’s not the same. They’re great rifles, and they take down deer, but they don’t carry in the woods like the traditional semi-autos.

Today, if you want a semi-auto rifle for hunting big woods bucks, you turn to Browning. The BAR with its aluminum receiver weighs in just under seven pounds in most cartridges. It’s available in all the traditional deer cartridges as well as some magnum thumpers. But, again, .30/06 is popular and hard to argue with.

Mine is the discontinued Lightweight Wood model with a 20-inch barrel. Oddly enough, today’s BAR Rifles often weigh less than my “Lightweight” model. Check availability for the Browning BAR here.

Read Next: Blast From the Past: Savage Model 99

The Browning BLR lever action rifle is one of, if not the last, catalog rifle offered in one of the all-time great big woods cartridges, the .358 Winchester. If that’s not enough power, you can get it in .450 Marlin which hits deer like a super-sonic sledgehammer.

Far from a traditional lever action, the BLR runs on a series of pinions and gears that would make a steampunk fan gasp for joy. The list of cartridges beyond these two is long and includes all the favorites. Another one worth looking at is the .325 WSM. Probably the least popular of the short magnums, it hits very hard. I have personally shot a few caribou with it, but a couple of my deer hunting buddies use the cartridge and claim it’s a gift from the deer hunting gods. Check availability for the Browning BLR here.

Savage turned out about a bazillion Model 99s before stopping production, so they are common on used gun shelves.

Lever-action rifles dominated deer hunting for decades, and this one merged lever guns with modern cartridges. It was the “thinking hunter’s” deer rifle of choice for generations.

The Model 99 uses a rotary (later detachable) box magazine, so unlike traditional lever actions, it could use pointed bullets. It was also strong enough to use high-pressure cartridges. It made its name with the .250-3000 and the .300 Savage. The latter was one of the most popular deer cartridges of all time. It was said to mimic .30/06 ballistics and actually did when it was introduced. (Things changed over the years.) Then in 1952, the .308 came along and killed it off. The good news is the 99 was also made in .308, which is always a good choice.

The Holy Grail of Model 99 rifles for deer hunters was chambered for .358 Winchester. I have been looking for one I can afford for years. If, like me, you like the odd cartridges, don’t rule out a .375 Winchester if you stumble onto one. This straight-walled cartridge is seeing a little bit of a comeback and was always a decent performer on deer. Check availability for the Savage Model 99 here.

Read Next: 54 Expert Tips on How to Hunt Giant Whitetail Deer in the Winter

Don’t forget your knife and dragging rope. With these rifles (and a little luck) you are going to need them.