About the Author Rob Pavey, a full-time writer and outdoors columnist with The Augusta (Ga.) Chronicle, has collected and studied... 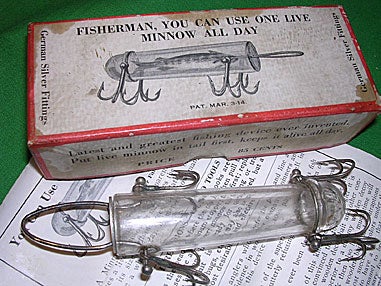 Detroit Glass Minnow Tube
These well-made, heavy glass lures were marketed around 1914 with the idea that a single minnow could live inside the Detroit Glass Minnow Tube all day and catch fish after fish. These valuable lures had German silver fittings. Imagine casting one onto rip-rap or rocks! The lure cost over a dollar in an era when many people barely earned that much in half a day. Value:
With Box:$1,000 or more
Without Box:$250 to $400 A Note About Value:
What's it Worth? That's the single most common question people ask about antique lures. The answers can be as varied as the millions of commercial lures made by thousands of companies from the turn of the century until the mid-1960s, which most collectors consider the end of the "collectible bait" era. Valuing lures depends on several very specific factors: age, condition, completeness (original box and paper flyer), rarity, color, and demand. Condition is perhaps the single most important factor. Often, a mint condition example of a scarce, desirable lure could bring many times what a well-used "warrior" might bring. Having the original box and paperwork also increases value. In some cases, an empty box for an early lure can be worth much more than the lure itself. Grading and valuing lures, however, is very subjective. A lure from your grandfather's tackle box that has caught hundreds of pike--and has the battle scars to prove it--might be worthless to a discriminating collector, but utterly priceless to you. There are dozens of reference books on antique lures, and most of them give values that can serve as a wonderful guide, but often require interpretation and adjustment. For example, the Creek Chub Pikie Minnow, a glass-eyed wooden bait made from the late teens well into the 1960s, is one of the most common collectible lures and can often be found--in nice condition--for around $10 in a common color such as perch scale. The same lure in a rare color--such as redhead and orange body with black spots--might be worth five times what a common color would bring, but you'd never know that from reading most of the available reference books. Demand for certain lures also drives values. Some baits made by small companies for a brief period are so obscure and hard to find that only a handful of collectors might pursue them, so there might not be too much competition when one becomes available. Conversely, there are common lures, such as the classic Bass Oreno by South Bend Bait Co., that were made in dozens (many dozens) of different colors. The variety of colors and sizes, and the abundant supply, makes them popular with collectors who enjoy trying to assemble one of each. That demand, of course, means that competition will increase dramatically for an unusual paint finish or special order color. How expensive can lures be? Several years ago, a one-of-a-kind size of a Riley Haskell Minnow, patented in 1859, brought more than $100,000. That is the exception rather than the rule. One of the great things about the antique lure collecting hobby is that there are opportunities to fit every pocketbook, from the high-end investor who can spend thousands of dollars on early, museum-quality baits to youngsters and casual collectors who can assemble fascinating collections with just a few spare dollars. Best of all, lure collecting is a hobby that remains in its infancy, meaning it is never too late to start. There are literally tens of thousands of untapped tackle boxes still sitting in basements, garages, and attics, waiting to be rediscovered by new generations of outdoorsmen who can appreciate the simplicity of yesteryear, and the workmanship that went into a product today's anglers often take for granted. Field & Stream Online Editors
SHARE

About the Author
Rob Pavey, a full-time writer and outdoors columnist with The Augusta (Ga.) Chronicle, has collected and studied fishing lures more than 24 years. His award winning collection of early lures and boxes is among the most comprehensive ever assembled.

Rob is a 22-year member of the National Fishing Lure Collectors Club and has authored or edited three reference books on antique tackle and written dozens of magazine and feature articles on the topic. His educational website www.mrlurebox.com contains photos and details on hundreds of other early lure makers, as well as information on collecting and appraisals.

If you’ve got a lure you think he might be interested in, or just want to ask him some questions about collecting antique tackle, shoot him an email at: rpavey1@comcast.net