5 Do-It-All Lures and How to Fish Them

Whether you’re new to fishing, or just looking for lures to add to your tackle box, these five baits will catch just about any fish in any kind of water 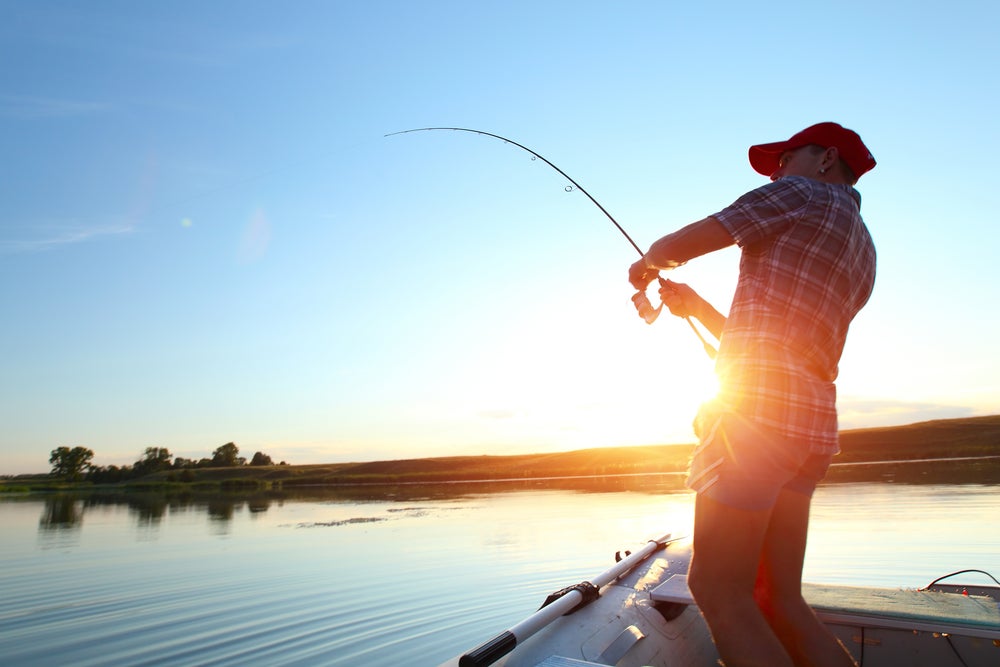 An angler sets the hook on a bass. Deposit Photos
SHARE

You can buy a tackle box with enough space for hundreds of lures, but you don’t have to weigh yourself down with tons of tackle in order to catch plenty of fish. These five lure types have won fishing tournaments, filled frying pans, and led to great fishing memories. Keep a few of each stashed with your fishing tackle, and you’ll be ready to hit the water at a moment’s notice.

It’s hard to say how a crankbait got its name—whether it is because you crank these hard-bodied lures back to your rod, or because anglers get cranky when they have to clean all the fish they catch with these highly efficient lures. One reason they work so well is that you can use them to cover a lot of water—and multiple water depths—in a hurry. Built with hard-plastic lips on the front of the lure, crankbaits hit the water and head for the bottom. Depending on the design of the lip, a crankbait might squiggle and wiggle just a few feet from the surface, so you can run it along weedbeds and under boat docks. Or it might deep-dive to 20 feet or more, allowing you to target big predators in submerged creek channels and drop-offs.

That duck-bill lip also makes a crankbait vibrate and shimmy in a lifelike manner, so you’ll want to be ready to set the hook immediately after splashdown. And keep your finger on the trigger each time the crankbait ricochets off a rock or log. That herky-jerky movement and eye-catching direction change will often prompt a strike from a predator fish that thinks a meal is about to get away.

How to Catch Fish with a Crankbait

In the spring, match the retrieval rate to the water temperature: The warmer the water, the faster you crank them in. You might need to go double-time in the summer, when fish often head for the bottom to seek cool water. And in the fall, when fish are laying on the fat, a fast retrieve prompts predators to strike.

Developed in the 1950s, the soft-plastic worm is now the object of nearly as much technology as you’d find in the Mars Rover. It’s the action of the tail that elicits most strikes, so you’ll want to know the differences to match the worm with the water.

A flat, slightly corkscrewed ribbon tail is most common. It can mimic a swimming snake—tasty!—or a large worm or even a leech making its way across the lake bottom. Curly-tailed worms look like shorter versions of ribbon-tailed soft plastics, but their cut-off curls aren’t as fluttery. They imitate a crayfish when you bounce one along gravel bars and hard ledges. If you’re fishing in areas with lots of vegetation, choose a soft-plastic worm with a paddle tail that won’t get wound up in grass mats and lily pads. And last but hardly least is a finesse worm. These straight-tailed baits can be dragged along the bottom, where they stop and start and dart enticingly, or dropped unweighted through a hole in the lily pads. Big fish rarely turn down that slowly sinking mouthful of squishy.

How to Catch Fish with a Soft-Plastic Worm

For a Texas rig, thread the hook point through the worm’s head and then out the underside, and bury the hook point into the worm. Add a bullet weight on the line before tying on the worm. A Carolina-rigged worm uses the same hook setup, but adds a leader and a swivel between the hook and weight.

Topwater plugs are a blast to fish because you control so much of the action. These floating, cylindrical lures are lifeless on their own, but an angler can snap and twitch the rod tip, sweep the rod from side to side, and vary the retrieve to turn a topwater plug into something that looks like a terrified baitfish fleeing for its life. Surface-feeding predators such as striped bass, largemouth bass, bluefish, and mackerel crush the lures, often striking multiple times as they zero in on the bait. There aren’t many more exciting ways to fish.

Topwater plugs come in a variety of shapes. Chugging style plugs are often fat and nearly egg-shaped, with deeply slanted or cupped faces that give them a loud, glup-glup-glup sound that fish use to locate the lures in the murkiest waters. More cigar-shaped plugs float high in the surface film, and emit a softer sound. When you make one of these lures “walk the dog” in an exaggerated side-to-side motion, watch out. Things might go bendy in a hurry.

Most topwater plugs are outfitted with multiple treble hooks, and all those hook points have a downside. You’ll can’t drag a topwater plug across logs, sticks, weeds, and other fishy hangouts. They’re a great choice for pulling close to structure, but the ability to cast accurately will keep you from wasting time pulling your plug out of the treetops, and keep it in the water.

How to Catch Fish with a Topwater Plug

You’ll rarely want to slow down the action when you see a fish pursuing a topwater plug. In fact, crank your retrieve even faster to make the bait look like it’s getting away. If you have to pull the plug from the water, no problem. Fire out another quick cast. Often, the second cast is the charm.

Inline spinners have been around for more than a century, but modern versions are cutting-edge tools adapted to a huge range of fishing conditions and fish. The design has three basic components: a weighted body, a spinning blade threaded on a wire that is in line with the hook, and a treble hook often dressed with deer hair or feathers. They are easy to cast, easy to fish, and as long as you’re fishing water free of grass, weeds, and sticks, nearly trouble-free. Except for the trouble of taking all those fish off the hooks.

The whirling blade that may be the most important component. It creates a large vibration path through the water, and tons of fish-eye-catching flash. If you fish deep water, go for a willow blade with a slim profile that will sink more quickly. If you plan on ripping the spinner across a trout hole, an Indiana blade will keep the spinner on track.

How to Catch Fish with an Inline Spinner

Keep the motor running. A spinner’s blades won’t spin unless the lure is moving. It’s okay to stop and start briefly if you want the lure to fall like a wounded baitfish, but for the most part you can rip an in-line spinner home just as fast as you can turn the reel handle.

Some people call spinnerbaits a “safety pin lure,” because that’s what they resemble: a wire safety pin with a lead head at the V, a spinning blade at the end of one of the wire arms, and a skirted hook on the other. They are some of the easiest-to-fish and fish-catchiest lures out there. A spinnerbait has it all—whirling blades that create the flash and flicker of a baitfish’s scales. A bulky profile that pushes a lot of water to help fish home in on the lure. And an undulating, enticing skirt that makes even the most reticent fish open up and bite.

And spinnerbaits are designed for use in shallow water, which dials up the fun. Most of the time you can see the lure flashing and dashing on the retrieve, and watch slash-biters such as largemouth bass crash the bait in an explosion of water. And while they’re not the best choice for weedy waters, that safety-pin design ensures that the hook rides point up so the bottom wire bounces off rocks and logs like an outboard motor skeg. Reel slowly around structure, and you can stump-knock your way to the fish of a lifetime.

How to Catch Fish with a Spinnerbait

Spinnerbaits are a go-to lure year-round, because they mimic so closely a minnow trying to get out of harm’s way. While a steady retrieve is the most common approach, you can also try raising the rod tip sharply and cranking the handle quickly a few turns. That will make the lure lift toward the surface like a baitfish seeking escape, and give a predator another reason to open wide.