The Story Behind the World-Record Whitetail Deer

Ever wonder what it’s like to shoot the biggest buck of all time? 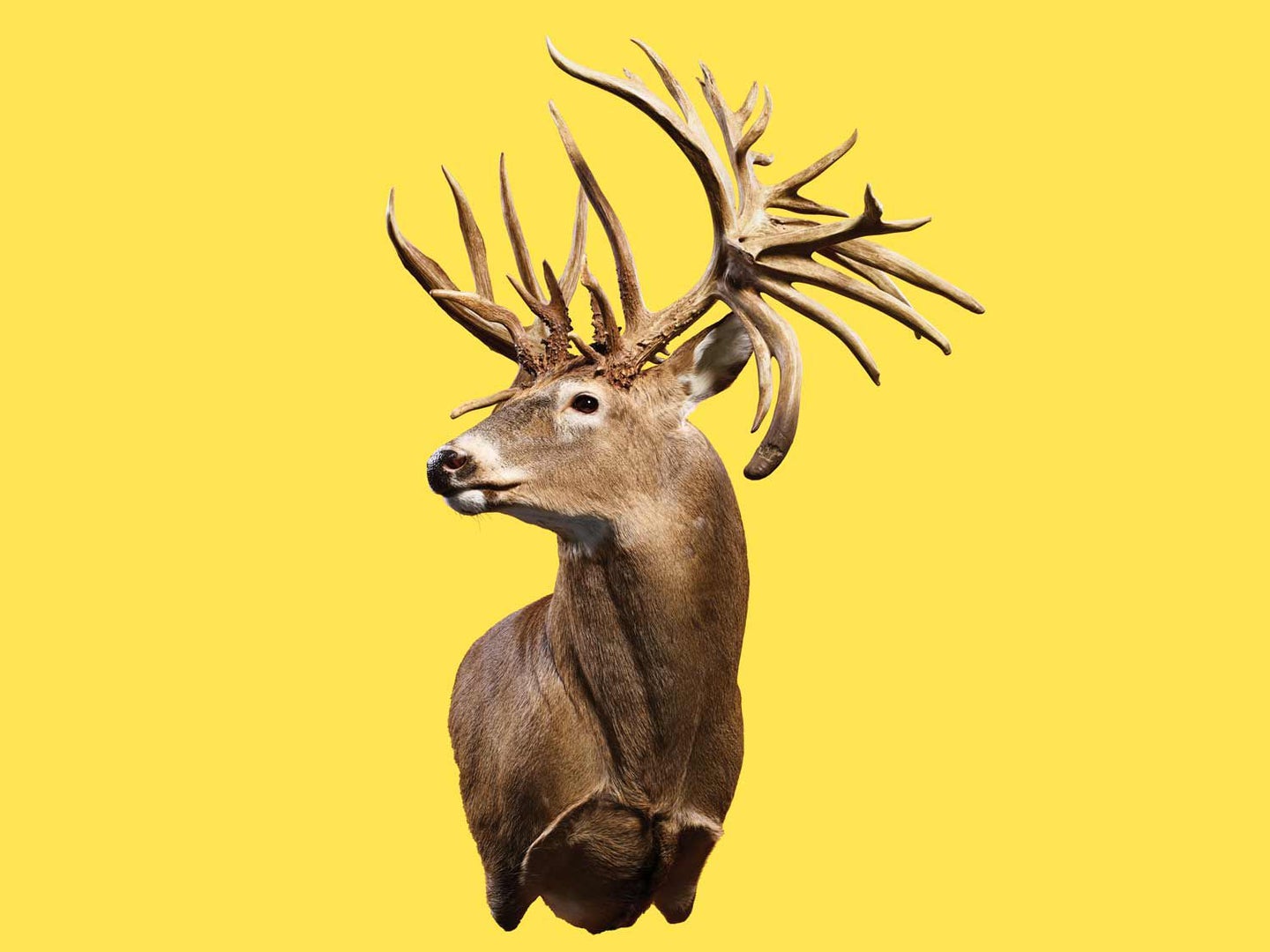 Stay tuned to F&S for the latest big-buck coverage, like this first-time buck that scored over 200 inches, the biggest whitetail ever taken by a female hunter, and the best bucks of the last 10 years.

Some guys won’t shut up about the biggest buck they’ve ever shot. They can’t resist a little bragging, and it’s hard to blame them.

But Luke Brewster doesn’t brag. It’s not like he’s short on opportunities either. Only a year has passed since the 31-year-old Marine killed the largest nontypical whitetail ever taken by a hunter, and public demand for details hasn’t waned. In between all the handshakes, interviews, expos, video shoots, and even backlash from haters, Brewster will still take the time to tell you his story—despite having told it a thousand times (and despite the fact that, if he’s being honest, he’s a little tired of telling it). But as he talks, his normally solemn expression will soften. And when he gets to the good parts, he can’t help but grin.

The Beginnings of a New Record Buck

When Brewster first showed up in 2015 to hunt the 40 acres his family owns in eastern Illinois, he was a relatively new bowhunter. He’d driven 700 miles from his home in Virginia to enjoy a week of deer season, and the neighbors—brothers Justin and Brent Cearlock, Ron Wagoner, and Josh Barrett—welcomed him as an ally in camp rather than a rival across the property line. Everyone pooled their spots into 200 acres with some 30 treestands and didn’t think any more about it.

That same year, Justin pulled fresh trail-cam photos of a buck he’d been keeping tabs on. The spindly typical had caught his attention the previous season—maybe a 3 1⁄2-year-old in 2014. By 2016, Justin knew he was a shooter. The deer’s gnarled mane of tines earned him the name Justin had been saving for a special buck, and Justin couldn’t help but mentally draft the message he hoped to one day text his buddies: Call me Scar…because I just killed Mufasa. In 2017, he came within inches of getting to send it.

Mufasa was working a scrape at 43 yards when Justin released his arrow. The shot felt right, but the arrow snapped an unseen branch and sailed 6 inches wide. Mufasa didn’t even notice, though he stepped out of range. Cameras caught him all over the farm through season’s end, and in October 2018 he was back—later than usual but bigger than ever. Trail-cam photos revealed a rutted-up buck with something like a muskrat den on his head.

A week later, Brewster left Virginia at 3 a.m. for the annual hunt. After a slow morning sit on November 2, Brew­ster and the guys grabbed breakfast in town and chose stands for the afternoon. Most based their decision on where they thought they’d have the best chance at Mufasa. When it was Brewster’s turn to pick, Justin mentioned a stand that no one had hunted in years. It was farther south than where Mufasa had been hanging, deep in a timber-covered bottom where the wind tends to swirl. Brewster took it anyway.

It required a few tries to find the tree, but eventually Brewster located a maintained hang-on stand, tucked into the thick limbs of an old Osage orange. He ranged everything, including a well-used scrape 26 yards behind him. Four hours into the sit, a handful of does appeared to the east. They looked nervous. Brewster worried they were catching a whiff of him, but they picked through the overgrown brush and eventually disappeared. He lowered his binoculars and discovered what the does had actually been worried about. “At first I was frozen,” he recalls. “I was wondering if it was real. Then I thought, Oh my God, it’s him. I couldn’t think of his name. I couldn’t even think.”

A massive buck stood 5 yards from the scrape, his identity unmistakable. After a beat, Brewster’s instincts kicked in. He slowly swapped the binos for his bow, grateful for the trunk between his stand and the scrape. The buck pawed the dirt four, five times. As he stretched to lick a branch, Brewster drew.

Following a habit from his time in the Marine Corps, Brewster ran through his shooting checklist—anchor, peep, sight, bubble, exhale, squeeze.

The buck tore off, the fletched half of the arrow pinwheeling at his shoulder. The shot had felt good but sounded bad, like a broadhead hitting scapula, and Brewster’s confidence gave way to doubt as he glassed for blood. His contacts were drying out, and he couldn’t seem to focus the binos. He texted the guys: I shot Mufasa.

Thirty minutes later, he climbed down, intending to head for his truck. “But I just couldn’t take it,” he says. “I had to go over to the scrape. When I got to it, I didn’t see any blood. And I felt sick to my stomach. So I looked for the arrow.”

It wasn’t far. The shaft was broken in half and coated in 12 inches of frothy blood. Now he couldn’t resist following the few drops beyond it. He scanned the woods, and stopped. One side of a rack jutted above the horizon. Brewster nocked a second arrow and crept closer.

Mufasa lay sprawled beyond the creek, just 40 yards from the scrape, thanks to a double-lung shot. Brew­ster had to stifle his yells, trying not to ruin anyone else’s sit. He dropped his bow and lifted the antlers, big as a pile of driftwood.

There were so many points, too many to count, and an old break here, then a fresh snap on the left side. Brewster worked back along the now obvious blood trail, looking for the piece Mufasa must’ve broken off in that last, frenzied run. At the base of a tree, he discovered a 13-inch split drop tine. He felt dizzy—almost drunk. On the walk back, Brewster realized he needn’t have tried to keep quiet. Justin and Wagoner were trotting down the embankment, whooping.

Social Media Explodes With a Picture of the Buck

It didn’t take long for word to spread.

The next morning, the guys took photos in view of a road, and soon the country lane had a traffic jam. The crowds attracted a game warden, who checked everything out and offered his congratulations. By then, one of the pictures Brewster had texted a buddy had made its way onto Facebook and gone viral. He was inundated with interview requests—and the usual jealous cries of foul play. He retreated from social media and waited to see what would happen with Mufasa’s legacy. It wasn’t even close: The official panel-score measurement tallied 327 7⁄8 inches, outstripping the previous world record (Stephen Tucker’s 2016 Tennessee buck) by 15 inches. It surpassed the 2000 Pope and Young all-time world rec­ord by 33 inches.

Justin says learning Mufasa had been killed was “a punch in the gut.” He’ll also be the first to tell you the honor of tagging this buck couldn’t have happened to a better guy. Smaller deer have torn apart closer camps, but these buddies have only hung more stands and redoubled their food-plot efforts. They don’t expect to beat Mufasa’s record—odds are it’ll be years before any deer does that. But you never know when the next 3 1⁄2-year-old will turn into something special.