The 25 Best Lures and Flies for Spring Fishing

Classic tackle you should have ready to rig come April 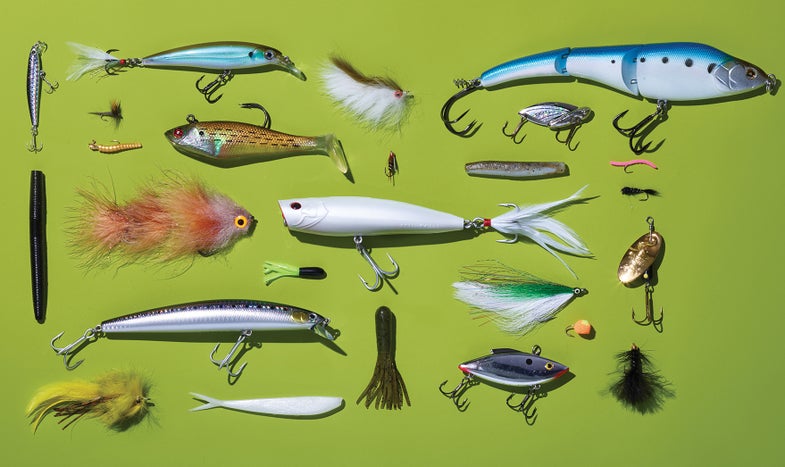 ● Usually during the first warm days of March, I get motivated to hit the garage and start reorganizing the dozens of tackle trays and fly boxes for the pending season. I always end up adding new lures and bugs acquired over the winter to the mix, but most of the task is about taking inventory of old standbys to see what needs replenishing. These 25 baits and flies are the ones you can bet I’ll have ready to rig come April.

The Hendrickson hatch is one of the first major bug events on the East Coast. Never leave home without some in late April and early May.

From trophy browns in dark holes to smallies on muddy banks, the slashing action of the X-Rap turns heads in chilly spring water.

No material is sexier in the water than rabbit strips. Their pulse and flutter takes everything from giant browns to monster pike to cow stripers.

Cicada: Not only does the heavy vibration of a Cicada turn smallmouths and walleyes in stained water, but it’ll get bit by big stream trout, too.

Sébile Magic Swimmer: When spring-spawning striped bass chase migrating herring up the local rivers, you’re going to have a hard time finding a better lure to match the meal.

All colors produce, but when trout are being stubborn, a ­mealworm-​­imitating gold Magnet always gets bit.

Storm Wildeye Swim Shad: As ocean water temperatures climb, migrating striped bass will get on the feed—and you won’t find many fish that will resist taking a shot at a 5-inch WildEye.

Beadhead Prince Nymph: Not sure which nymph to fish this spring? Tie on a Prince. The flash and combo of light and dark colors on this classic pattern won’t go un­noticed by very many trout.

This small soft plastic stands upright on the bottom; wiggle it in front of a sluggish bass’s face till it can’t help but strike.

San Juan Worm: Scoff at this fly if you want to, but when the streams are stained and cold in spring, you’ll still come tight drifting a pink worm.

Southern Pro Lil’ Hustler: As crappies move shallow to spawn, it’s hard to top this little tube under a slip-float. Any color can kill, but black-and-chartreuse has always been my favorite.

Stillwater Smack-It: The Smack-It has been around for several years—and for good reason: Every herring-eating striped bass or shad-chasing smallmouth will smash this lure.

From the farm pond to the river, it’s hard to beat a slow-twitched Senko for tricking sluggish early-spring largemouths and smallmouths.

Junkyard Dog: This big streamer has loads of shimmy and swagger. It’s what you tie on when you want a brown that can be measured in pounds, not inches.

Daiwa Salt Pro Minnow: With a unique wobble unmatched by similar-style plugs, the SP has become a staple in my bag for surf stripers in spring.

Lefty’s Deceiver: In natural baitfish colors, a classic Deceiver will get chewed by everything from pike in skinny water to stripers around the jetties.

Egg Fly: You can spend all day arguing whether or not the egg is really a fly. What’s not up for debate is its ability to score stocked trout when nothing else will.

Panther Martin Teardrop: Run it shallow or let it drop deep; you won’t find a trout that will pass up the strong vibes of a classic Panther Martin spinner.

Measuring 2¾ inches, this crayfish imitator is my go-to for early-season smallmouths on both big rivers and small streams.

This streamer has a wide, flowing profile but splashes minimally, making it perfect for big browns in small streams.

Fish it weightless in the shallows for sunning pickerel and pike, or rig a Fluke on a jighead to hit giant spring weakfish.

Rat-l-Trap: When spring runoff makes my local rivers high and muddy, a loud Trap ripped off the banks is easy for bass to find.

Beadhead Woolly Bugger: You won’t catch me on a trout stream in April without some beadhead Buggers, ­either stripped or dead-drifted, in black.

RELATED: The Six Best Bass Lures for Under $5