Put 764 years of successful angling in your tackle box. 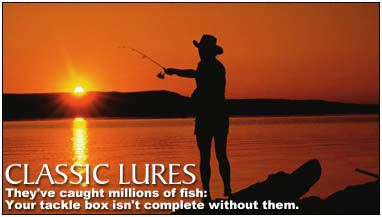 Fishing has become a game of speed, at least among high-visibility bass pros who dazzle the public eye with fast boats, monster motors, and robotic casting routines measured in cycles per minute. But fishing was not always like this, and for many anglers it still is not. The less visible majority still fishes at a slower, subtler pace for bass or trout, stripers or muskies, pickerel or perch. It’s a classic pace that evolved around classic lures, bits of timeworn cedar and tin and steel. Think of the plug your grandfather gave you, perhaps, or the spinner on which you took your first trout. This link to tradition breeds confidence with every cast. Time-honored lures are proven lures, after all, and fishing with any one of these classics is always an occasion for optimism.

** 1) Little Cleo**
She was a hootchie-kootchie girl who for 43 years had her dancer’s image stamped on the back of a fishing lure. A New York City songwriter named Charlie Clark saw Little Cleo perform during the 1930s; when he developed this popular spoon with its wiggling, dancing action in 1953, she became its namesake. In 1996 a female employee of a major retailer took offense at the dancer’s image on the lure, and for the sake of newfound political correctness, the image was removed by Acme Tackle of Rhode Island, the current manufacturer. Little Cleo spoons are thick in proportion to their surface area, so they fish relatively deep. This makes them a favorite trout spoon, but in sizes ranging from 1/16 to 11/4 ounce, they’re suitable for everything from panfish to steelhead and stripers.

** 2) Zara Spook**
Zaras are the best topwater lures of all time, and that has been true since Heddon first introduced a precursor-the Zaragossa-for Florida fishing in 1920. The Zara’s darting, erratic walk-the-dog surface action is deadly for anything that will eat a surface plug in freshwater or salt. Newcomers to this plug, who need to learn the rod-manipulation tricks necessary to fishing it, should note that larger versions are easiest to work and that experimenting with short casts will allow you to learn by watching the plug as you twitch it. Zara Spooks are now made by Heddon/Pradco.

**3) Mepps Aglia **
It’s the little spinner that could, meaning that it’s not only been catching fish since first developed in 1938, but it’s also thrived as a brand for more than half a century. Mepps is an acronym for Manufacture d’Engins de Pr¿¿cision pour P¿¿ches Sportives as developed by French engineer Andr¿¿ Meulnart. As spinning evolved in the United States after World War II, so did Mepps, first imported here by Wisconsin tackle-shop owner Todd Sheldon in the 1950s. Mepps and Sheldons’ both prospered, and the lure is still a staple for everything from trout to muskies.

4) Johnson’s Silver
Minnow Here’s a bit of classic heavy metal that’s even older than Ozzy Osbourne. This weedless spoon has been luring bass and pike out of thick weedbeds since about 1920 and has become a classic on southern redfish flats, too. The concept is simple: Weld or braze a hook onto the back of a spoon blade, add a wire weedguard, and you’re in business. The fishing is equally simple: Cast into or over weeds, lily pads, or exposed logs, and then skim, skitter, and spin the lure back through the heaviest cover without hangups. Few other lures do this so well. Add a pork-rind or soft-plastic trailer to the large single hook for extra appeal. The brand itself is now owned by Pure Fishing, once known solely as Berkley.

** 5) Jitterbug**
At first it was a reject: part of a metal tablespoon screwed to a carved cedar block in a failed attempt to make a diving plug. But by the mid-1930s, Akron, Ohio, lure maker Fred Arbogast had revised that earlier failure into a wobbling, gurgling surface lure named after the period dance craze. Modern versions are essentially unchanged, although theey’re now made of plastic in the Pradco stable. They are still a primo surface lure for large- and smallmouth bass in the shallows, especially in calm water at dusk and dawn. An all-black, muskie-size version is possibly the best of all lures for big largemouths after dark.

** 6) Lucky 13**
This classic is no longer every angler’s first bass plug, but perhaps it should be. An extended lower lip causes this cup-faced popper to dive and wiggle when twitched, in perfect imitation of a floundering baitfish. First introduced by Heddon around 1915, it’s still widely used for southern seatrout, and it’s also on the must-have list of many pike anglers in the U.K. Lucky 13s are still produced by Heddon/Pradco.

7) Flatfish
It looks like a banana, casts like a blimp, and might have the wildest wiggle in angling. Charlie Helin patented his Flatfish in 1936, and by his own claim, the Detroit, Michigan, plug maker had sold 5 million of them before 1950. Now made by Washington’s Yakima Bait Co., Flatfish in fly-rod sizes are still my go-to lure when trolling for trout-pond rainbows, whereas the largest sizes are still top lures for giant lakers in the Far North. Intermediate sizes work great for bass and pike as long as you can adjust your pace to this lure’s requisite slow retrieve.

**8) Bass-Oreno **
This redhead from South Bend, Indiana, has been driving bass nuts since about 1915. The deeply cupped face gives the plug a slower and more exaggerated wiggle underwater than modern crankbaits, which tend to tight, fast vibrations. As the story goes, some of the guys at the South Bend Bait Co. plug shop used the term “peach-oreno” to point out the best-looking girls passing by. The oreno suffix quickly became attached to this as well as many other South Bend lures. The Bass-Oreno design at one time included everything from fly-rod sizes to giant tarpon models, but only the common bass-fishing sizes are still available. They’re now made by Luhr Jensen, and-remarkably in this age of plastic-they’re still made of wood.

**9) Uncle Josh Pork Frog **
In concept, at least, these are America’s oldest bass lures. The idea of dangling a “bob” for bass from the end of a long pole goes back to the mid-18th century in the Deep South, and when Uncle Josh founder Alan Jones began fishing pork chunks for Wisconsin bass in 1920, it was an extension of that. Pork frogs are still enormously popular; bass still show a fondness for real meat. Placed on a large weedless hook and twitched through a weedbed, these are killer bass lures, but they’re most commonly used as trailers on weedless spoons and jigs.

**10) Pikie **
Minnow In 1916, railroad clerk Henry Dills gave the angling world some lip and thereby reaped a fortune. That was the year Dills and two partners began the Creek Chub Bait Co. in Garrett, Indiana. The “lip” was the addition of a metal lip to a wooden plug that made the lure dive and wiggle underwater. It was a revolutionary concept that found its ultimate expression in the classic Pikie Minnow. Pikies at one time held numerous world records for a variety of fish. Part of their magic came from being built of buoyant white cedar. They are still offered in limited sizes by Creek Chub/Pradco, but modern versions are-alas-made of plastic.